The 1,098-carat diamond recovered from Jwaneng Mine is the third biggest gem-quality diamond ever.
By Andrew Maramwidze July 8, 2021
Facebook
Twitter
Linkedin
Email 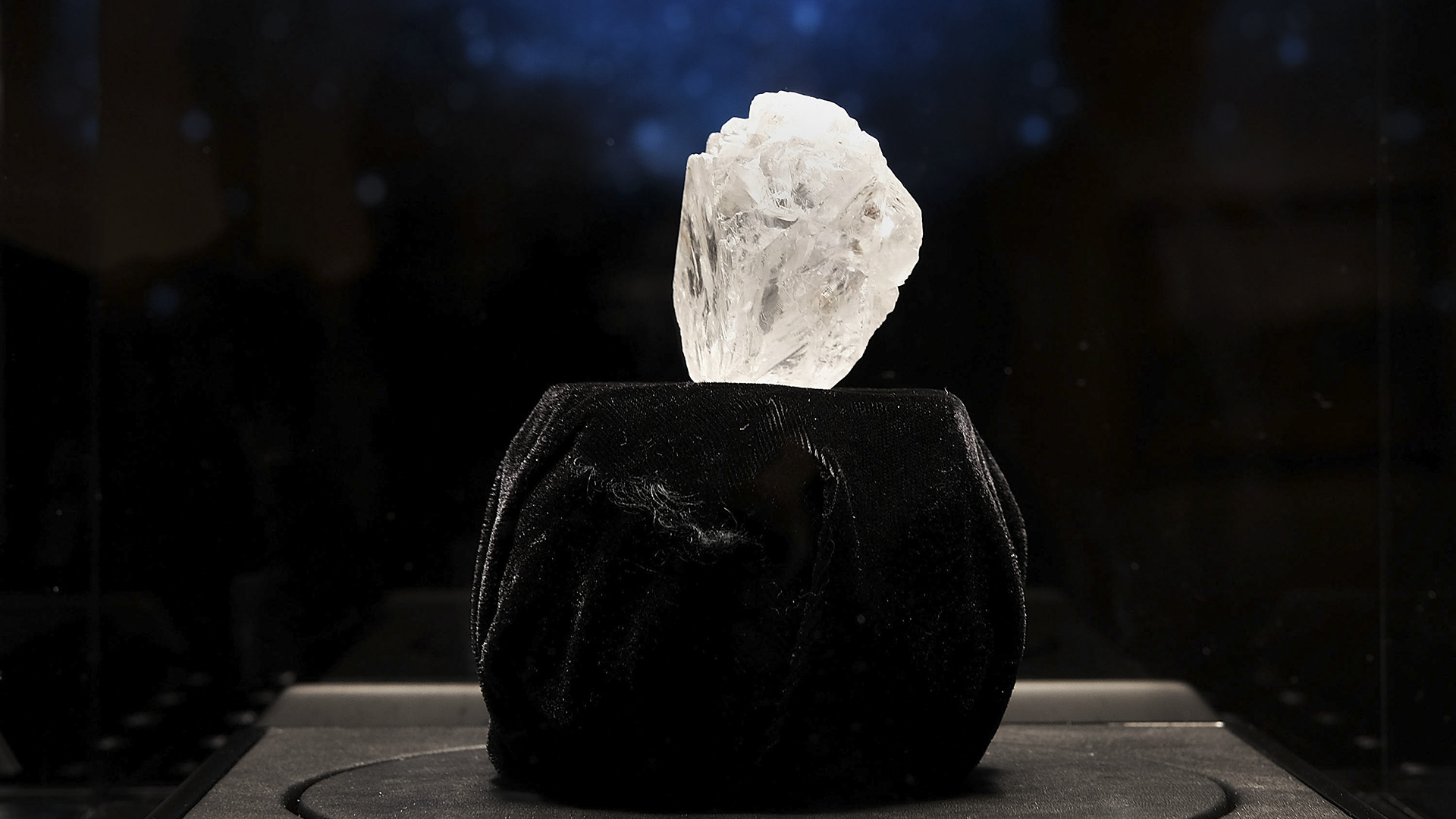 The 1,109-carat rough Lesedi La Rona diamond, the biggest rough diamond discovered in more than a century, sits in a display case at Sotheby's on May 4, 2016, in New York City. The stone was found by Lucara Diamond Corp. at its Karowe mine in Botswana. (Spencer Platt/Getty Images)

GABORONE, Botswana — The month of June 2021 was good for Botswana’s diamond industry. Two fresh discoveries from two different mines cemented the country’s claim to be “diamond-rich”.

Two high-quality gems, weighing 1,098 and 1,174.76 carats, were discovered at Jwaneng and Karowe, mines respectively, within a week of each other.

Jwaneng Mine, a subsidiary of Debswana, a company owned 50-50 by mining giant De Beers and the Botswana government, made the first discovery on June 1, setting a new record for the mine after 28 years. 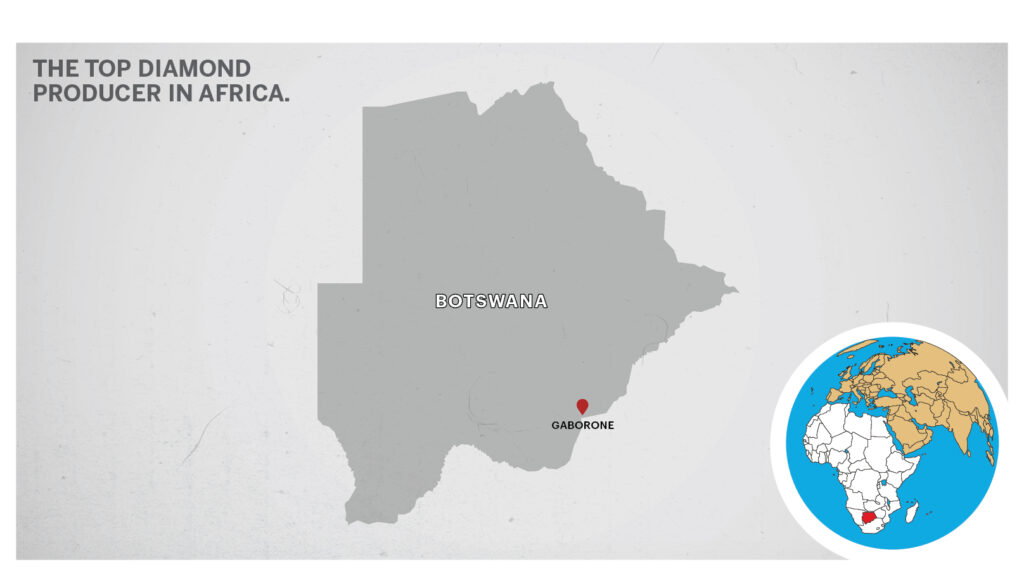 She said the diamond was discovered from Jwaneng Mine’s south kimberlite pipe, although the company’s valuable discoveries are usually from the center pipe.

Known as the Prince of Mines, Jwaneng Mine, commissioned in 1982 by then-President Sir Ketumile Masire, is the richest diamond mine in the world by value.

Although the diamond is yet to be valued or named, Armstrong said its sentimental value is already significant.

Before this discovery, the largest gem-quality diamond found at Jwaneng Mine was 446 carats in 1993.

The discovery, according to Debswana, was made possible through a combination of cutting-edge technology to uncover and process the diamond, and the experience of its team, which spotted the mineral and protected it throughout the recovery process.

“This diamond could not have come out this big on conventional processes; it could have been broken,” said Minister of Mineral Resources, Green Technology and Energy Security Lefoko Maxwell Moagi.

Alongside Orapa Mine, another Debswana subsidiary that resumed operations in 1971, Jwaneng Mine has been at the heart of Botswana’s phenomenal growth since the 1970s.

“The diamond discoveries at Jwaneng and Orapa Mines have earned Botswana a reputation as a global success story in transforming finite resources below ground into infinite opportunities above ground,” Armstrong said.

President Mokgweetsi Eric Keabetswe Masisi is upbeat that the discovery will go a long way in funding national development.

“The proceeds of this diamond will in part meet our national development needs,” said Masisi while addressing the press when the diamond was presented to him on June 16.

“This is an occasion to celebrate for Botswana, especially during this time when we need every little thebe (cent) we can get so that we can push our development agenda and economy.”

The Jwaneng discovery is poised to be the third biggest find in Botswana, behind Lucara Diamond Corporation’s discovery of Sewelo in April 2015 and Lesedi La Rona in November 2019, both recovered at Karowe Mine, weighing 1,758 and 1,111 carats, respectively.

Three weeks after the Jwaneng discovery, on June 22, Canadian firm Lucara Diamond Corporation announced the recovery of 1,174.76-carat diamond at its Karowe Mine.

“Although complex, these diamond recoveries do contain large domains of top color white gem that will be transformed through our partnership with HB Antwerp into valuable collections of top color polished diamonds, very much in high demand in the market today,” said the company’s Chief Executive Officer, Eira Thomas.

Lucara Diamond Corp is currently expanding the Karowe mine following the government’s approval of the proposed power line route and a new 25-year extension of the mining license to 2046.

The underground expansion program has an estimated capital cost of $514 million (P5.6 billion) and five years of development.

On the other hand, Jwaneng Mine plans to build the world’s largest underground diamond mine expected to gobble 65 billion pula ($6 billion), Thabo Balopi, Debswana’s Head of Transformation and Innovation, said in a press briefing in April 2021.

Balopi further said the underground mine will have more than 360 kilometers (224 miles) of tunnel development and will hit full production by 2034.

The underground mine, according to Balopi, would have a capacity of nine million carats per year, extending Jwaneng’s lifespan by 20 years, as an early access decline will be in place by 2023

The huge investment in Botswana’s diamond industry comes when the Covid-19 pandemic threatens the sector, and the growing synthetic diamonds’ industry threatens to replace pure diamonds.

So far, the government has not announced alternative plans in the event demand tilts towards synthetic diamonds.

The company announced that the provisional value of rough diamond for the fifth sales cycle of 2021 is $470 million, while in the fourth cycle, the actual sales were $385 million.

Last year, the company recorded only $56 million in both cycles four and five.

“With this new level of optimism, we see an increased comfort level shopping, with consumers opting for pieces that represent enduring value.”