Diabetes Is Not An Obstacle To Running Long Distances 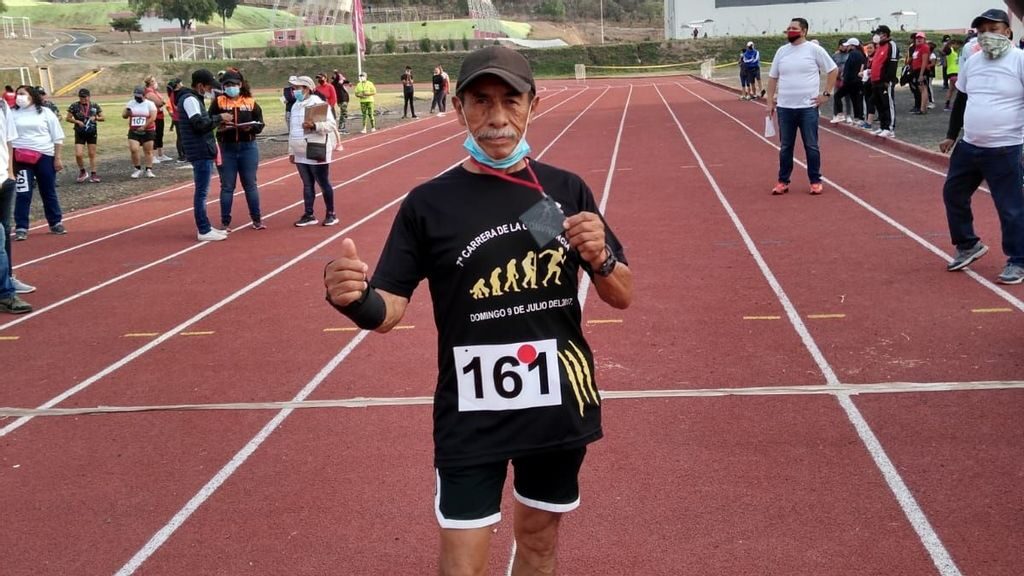 After receiving his diabetes diagnosis, Armando Flores found in sports the drive to give a positive turn to his life. (Courtesy Armando Flores)

Armando Flores received news that changed his life at age 57. He had been having some discomfort and went to the doctor. The result was overwhelming.  He had to learn to live with diabetes.

“When the doctor gave me the diagnosis, I felt fear and concern. My glucose was 390 mg/dl [the normal level for a non-diabetic person is 90-110 mg/dl], and he immediately prescribed me insulin as a means of rapid control,” said Flores.

Once a transport operator in a company and currently retired, Flores did not allow himself to feel defeated. He educated himself about the disease and devoted his time to playing sports.

“I exercise to keep control of my glucose. I also follow my treatment rigorously and eat healthy food. Athletics have allowed me to live a healthy life, and I can share my experience with others,” Flores said.

At 70, he believes: “Diabetes should not be an obstacle to achieving great things. I try to continue living as I have done until today, playing sports and setting an example.”

“I run from six to nine miles a day as part of my training … I have run four 26.2-mile marathons in Mexico City,” he said.

In Mexico, 63,925 seniors aged 65 or older died from diabetes complications in 2019, according to the country’s National Institute of Statistics and Geography. The International Diabetes Federation estimates that about 5 million adults in Mexico live with undiagnosed diabetes.

“In Mexico, diabetes is still treated as if it were an acute disease, which is a mistake that marks patients from the beginning of their illness. Patients are told that to live with diabetes, they have to take a medicine called Metformin and are given a paper with some feeding instructions. But diabetes education is not taken into account from the beginning of the treatment,” said Dr. Marco Villalvazo Molho, a certified diabetes educator and the former president of Mexico’s National Council of Diabetes Educators.

“Doctor Elliott P. Joslin, the clinician behind diabetes education, has said that education is not just a part of diabetes treatment, but the treatment. This thought is now more current than ever. More than 75 percent of the people with diabetes in Mexico have no control of their disease, which causes its complications to precipitate catastrophically,” Villalvazo said.

The doctor says it is essential to know how to educate patients about diabetes.

“To inform is not to educate. People may know what to eat or when to monitor their glucose and still not do it. Patients need to improve their behavior to incorporate these activities into their daily lives, and that is what diabetes education achieves,” he said.

But Mexico’s health authorities do not pay attention to these needs, Villalbazo said. “The patient is offered information and theory that are both hard to understand and complicated to carry out. Most organizations do not work with certified diabetes educators who can explain the reading material [doctors provide].”

There is also a lack of specialists in the area, he said.

“For more than 20 years, health professionals have had the possibility of becoming diabetes educators through different diplomas. However, the number of graduates every year is meager, and only a small proportion is fully working in diabetes education. Currently, there are in Mexico just under 300 diabetes educators certified by the National Council of Diabetes Educators,” Villalvazo said.

Vanessa Ubaldo, a nutrition graduate and a certified diabetes educator, said that the care for people with diabetes in Mexico is deficient.

“It is carried out just at the curative level, instead of being preventive. Diabetes’ chronic complications are costly for the patient, the family and the government. Diabetes is considered an epidemiological emergency, and education on the topic is not disseminated regardless,” she said.

A dream that he can achieve

On weekdays, Flores works as a geriatric physical therapist at Mexico’s Institute of Social Security.

He trains in the afternoons, and on Sundays, he runs with a group of athletes of different ages.

A few years before the pandemic, Flores began envisioning a dream: to run the New York Marathon. However, due to various bureaucratic procedures, he has not succeeded.

“I do not have sponsors, but it is not only money. I have a problem with my birth certificate, which has made it impossible for me to process my visa and passport. But I believe that running the New York Marathon is a possible dream … The desire exists, and I know that one can do anything in this life,” said Flores.

His experience has given him a lesson that he shares every day with people of all ages who live with the disease.

“I hope … the disease does not stop them from living a healthy life, following their treatment, keeping a good diet and practicing physical activity. Even with diabetes, it is possible to achieve anything you want, including running a marathon at 70,” he said.