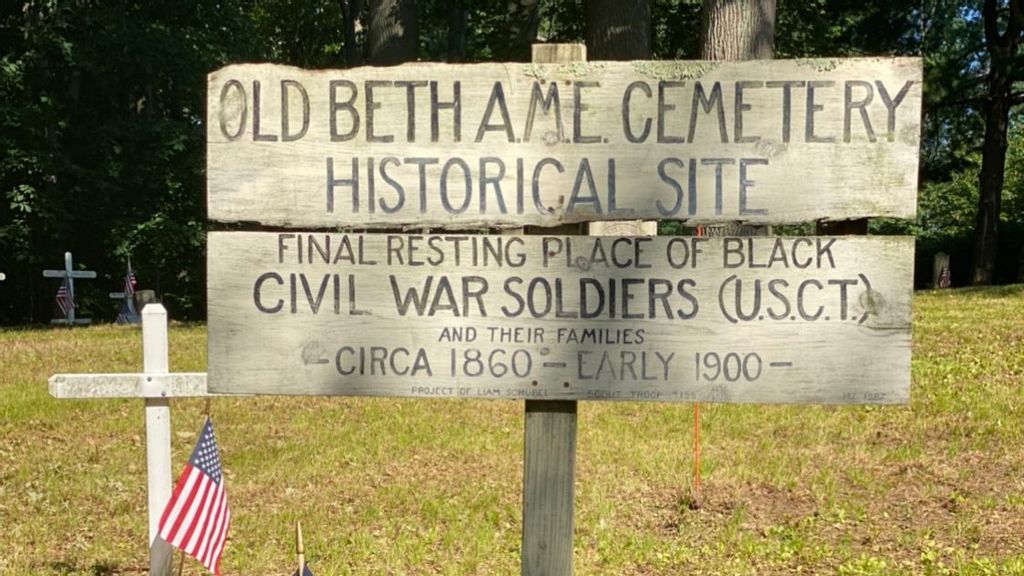 FREEHOLD, N.J. — They pulled weeds on a June Saturday. They cleared fallen trees and scooped up debris. They revealed a nondescript burial ground where Civil War veterans have rested for 156 years. The honored dead, who fought to end the enslavement of black Americans, were black themselves.

The June 26 cleanup at the Squirrel Town Historical Cemetery in the town of Freehold drew a multiracial crowd of more than 50 people, intent on making the rundown burial ground a landmark instead of an afterthought lost to time. Nearly three dozen men lay underground, forgotten.

Bethel AME Church in Freehold owns the property, which dates back to a Union victory in May 1865.

“It’s history for not only the church, but also for the town, for people of color, and the United States,” said Rev. Ronald Sparks, the church’s pastor. “It’s important for the descendants that their families be recognized, and that’s what we want to do. It’s time to tell our story and get that story out there.”

The graveyard rests on a hill where the unpaved Illene Way and Old Monmouth Road meet, just off Route 522. The area known as Squirrel Town was once the home of segregated blacks who worked the land on nearby farms.

While it’s designated an historic site, it does not register on GPS and is not visible from any main road. The church had lacked the funds and manpower to properly maintain it, Rev. Sparks told Zenger, but the church’s trustees launched a social media campaign to fix that, soliciting support and setting a date to clean up the two-acre property.

Volunteers showed up after a local news broadcast featured the effort. Some brought landscaping equipment to clear away the brush.

“It was time to take care of it because honored veterans shouldn’t be laid to rest in such a place,” said Robert “Babe” Warrington, a church trustee.

“We used to solicit help from the Boy Scouts, and even some inmates from jail have cleaned things up in the past. But it’s in a remote spot and it’s hard to get equipment up there. It got to the point where we needed to do something. The response was tremendous.”

After Abraham Lincoln signed the Emancipation Proclamation in 1863, approximately 190,000 black men served as soldiers for the Union Army. Another 19,000 joined the Navy. All were part of the United States Colored Troops, which grew to 175 regiments within the U.S. Army. Those units, church members say, validated abolitionist Fredrick Douglass’s proclamation that “he who would be free must himself strike the blow.”

Historical records show those regiments won victories on the battlefield. About 40,000 black soldiers died from either battle or disease before the Civil War ended in 1865 — a death rate about 35 percent higher than white Union troops.

Knowledge of their sacrifices remains sparse, even in Freehold.

“It’s important to know that even though there were segregated troops, these black fallen soldiers paid the ultimate price for the freedom that we have now,” said Warrington. “Unfortunately, things like this don’t get taught in the school system.”

“I don’t think a lot of the school systems around here know about Squirrel Town or other black cemeteries that exist,” he said. “I grew up in Freehold and didn’t know anything about Squirrel Town until I joined the church in 1989, and I’m 68 years old.”

The Bethel AME Church is also working on an updated list of those buried in Squirrel Town.

Among the names is Cpl. David Limehouse of Company A in the 127th United States Colored Troops. He suffered a gunshot wound to his left hand while seeing heavy action at the “Siege of Petersburg” in Petersburg, Virginia, where a nine-month battle ended with a victory. He died in 1896.

Lewis Conover, who fought in Company rests near him. Conover served from August 1864 to September 1865 and saw action in the First Battle at Deep Bottom Virginia, also part of the Siege of Petersburg. Conover was discharged at Brazos, Texas before moving to Freehold, where he died in 1910 at the age of 65.

Alongside the Civil War heroes are buried black veterans who served their country in other armed conflicts. Pvt. James William died while serving in a segregated unit during World War I. American forces were segregated until after World War II.

Freehold’s black pioneers are buried here, too, including Alex and Julia Hawkins, whose children served in World War II.

“A lot of our history is forgotten. It’s swept under the rug,” said Tracey Reason, their great-great-granddaughter. “History likes not to give homage to black people. But these lives and legacies are too important to be forgotten.”

Reason’s niece Kelly Guerra, another Bethel AME Church member, said she is scouring the Internet and archives to gather names of others buried in the cemetery.

Guerra told Zenger she plans to send the list of names to the Veterans Administration, which provides free headstones in recognition of each veteran’s service. “I’m glad people are finding out about the history of Squirrel Town and about Bethel and their own people,” she said. “We’re also connecting family members with history they never knew.”

Capt. Robert C. Meyer of the Sons of Union Veterans of the Civil War, which helps clean up and restore grave markers, attended the June cleanup and put “Grand Army of the Republic” plaques on or alongside broken and unreadable headstones.

“Honoring any veteran by clearing an unmarked, overgrown grave is very important,” Meyer said. “It adds to the community when you clean up these kinds of areas and bring them back to light. We still need to get some headstones out there, some new signage and other things that need to be addressed. The veterans buried there deserve that.”

About a half-acre of the property still needs clearing.

Long-term plans call for a fence, new signs, crosses and a flag pole to make the cemetery easier to locate. Neighbors whose property borders the cemetery support all of it.

“Since our cleanup we’ve gotten a lot of calls and a lot of interest in the cemetery,” Rev. Sparks said. “It’s obviously important to people, especially when you’re talking about civil war soldiers and the history of families in this area. This is a predominantly white county. But people both black and white want to know the story.”

The church plans a celebration of the restoration on Veterans Day in November.

“We want to hold ceremonies there on Veterans Day, Memorial Day and Juneteenth,” Rev. Sparks said. “These will be annual events that will help us tell the story so young people can understand the history they may or may not learn in school.”

“We want to be a historical site where when people visit Freehold — this is a stopping place — as well as the original church. It’s not just our church history and New Jersey history. it’s U.S. history.”