Officials destroyed the nests, adults and chicks because they believed they could spread the virus.
By Ritaban Misra July 8, 2021
Facebook
Twitter
Linkedin
Email

(Representative image) The cattle egret is a species of heron found in the tropics, subtropics, and warm-temperate zones. (Rod Waddington/Flickr (CC BY-SA 2.0))

KOLKATA, India — Around two hundred cattle egrets, including hatchlings, died in Tangla town in the northeastern Indian state of Assam after the Tangla Municipal Board, a civic body, on June 24, ordered the removal of a bamboo thicket where the birds were nesting.

This was done because the authorities suspected that the SAR-CoV-2 virus could spread from the birds’ habitat to the surrounding areas.

The cattle egret is a species of heron found in the tropics, subtropics, and warm-temperate zones.

The incident came to light when an order was issued by the Tangla Municipal Board chairman Dilip Boro on June 24 to clear the bamboo grove. 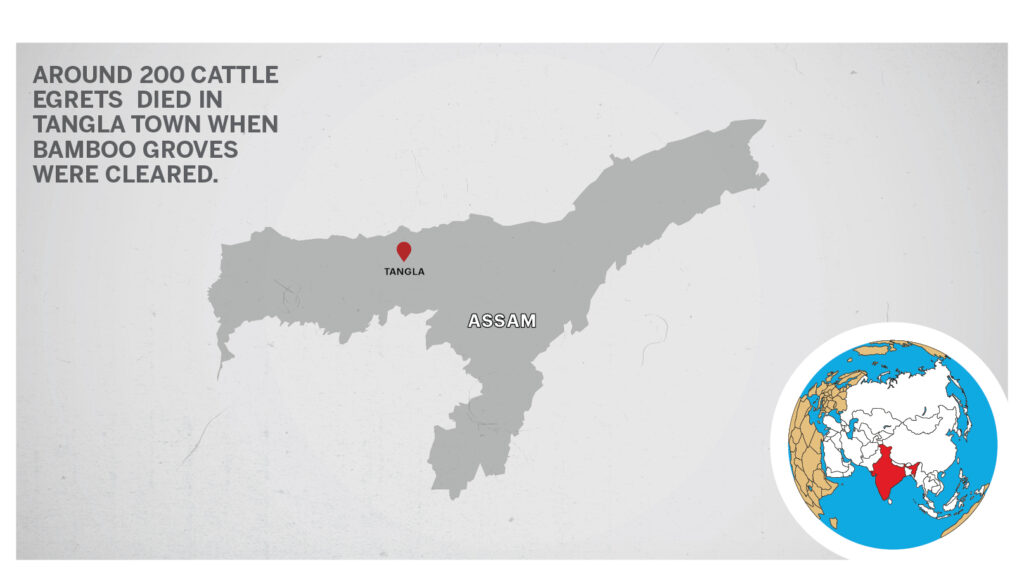 The order issued to the owners of the property — Mahendra Deka, Amio Narzari, Rajat Bhattacharjee, Lokjit Sutar, and Geetika Das — said that the bamboo thicket would be cleared as they were unable to maintain hygiene in the area.

“Your neighbors have complained that the nesting on your bamboo trees is destroying the environment with their urine and droppings (sic),” read the notice. “This can also spread corona infection. Thus, you are asked to cut down bamboo trees for a clean, healthy environment.”

“These birds come and stay for two-three months. Once their chicks grow, they fly away,” said Mahendra Deka, one of the five recipients of the notice. “So, what is the problem there?”

Sutar and his family were away on June 24 when the civic body members arrived and chopped down the bamboo trees, leading to the death and injury of around 200 birds.

The area’s residents did not welcome the action, and complaints were lodged against Shantanu Das, the executive member of Tangla Municipal Board, who had issued the initial warning to the five residents.

The forest department filed an FIR (First Information Report) against Das for the death of nearly 200 egrets and cormorant hatchlings due to the felling of bamboo trees. A case under Section 55 of the Wildlife Protection Act, 1972 was also filed against him.

Assam Chief Minister Himanta Biswa Sharma condemned the situation. He has ordered an inquiry in this matter.

Representatives from the Tangla Municipal Board did not respond to queries from Zenger News.

“Complaints have been lodged against the senior executive of the municipal board,” said N.K. Bordoloi, Divisional Forest Officer, Dhansiri Forest Division, to Zenger News. Tangla is in the Udalguri district, where the Dhansiri river and forest division are situated.

“We have been taking measures to rescue the remaining birds ever since we got wind of the situation. As a result, almost 90 egrets have been rescued, and we are planning them to send to Centre for Wildlife Rehabilitation and Conservation at Kaziranga.”

Kaziranga National Park is in the Golaghat, Karbi Anglong, and Nagaon districts of Assam.

“The biggest problem of the local body it appears was the pungent smell that was emanating from the birds,” Anmol Ohri, founding director of environmental conservation organization Climate Front India, told Zenger News.

“It is clear they used Covid-19 as an excuse to remove the grove and, subsequently, the birds from that place.”

“The same happened in Kashmir during the nationwide lockdown in 2020 when local authorities thought of cutting poplar trees on the pretext that they cause respiratory problems and allergy to some people and may aggravate symptoms of Covid-19.”

Ohri feels that there have been many such instances in the last year in the name of protective measures against Covid-19, but most have not come to the forefront like this. He said that in Nepal, compared to 2019, April 2020 saw more illegal extraction of wood.

“Since the advent of Covid-19, destruction of forests and natural habitats have become rampant,” said Ohri.

There are no cases to prove bird droppings can spread Covid-19.

“Egret droppings do not cause Covid-19,” tweeted Shaheen Ahmed, co-founder of Dwima Collective, a discursive space on the multiple indigenous narratives, communities, and histories of Assam and the rest of Northeast India.

“A crime against wildlife has been committed. This should not be repeated, and the guilty must be punished. Such killings and the destruction of egret habitat cannot be tolerated.”

“SARS-CoV-2 is a zoonotic disease — an infectious disease that is transmitted between species,” Diptak Chakraborty, a professor of zoology at the West Bengal State University, told Zenger News. “However, there is no conclusive evidence that egrets harbor the virus.”

“In the case of bird flu, we had concrete proof that birds like roosters and hens were carriers of the H5N1 virus that is deadly for humans. This is the reason why those birds were culled for safety measures,” said Chakraborty, condemning the actions by the Tangla Municipal Body.

As per the latest reports, the local forest authorities of Dhansiri have decided to conduct awareness meetings with the leading citizens and environmentalists of the region and government officials on the need to protect wildlife.