No cat-astrophe here, as feline cheats death after being pulled from inferno and given oxygen.
By Tijana Milikj July 7, 2021
Facebook
Twitter
Linkedin
Email 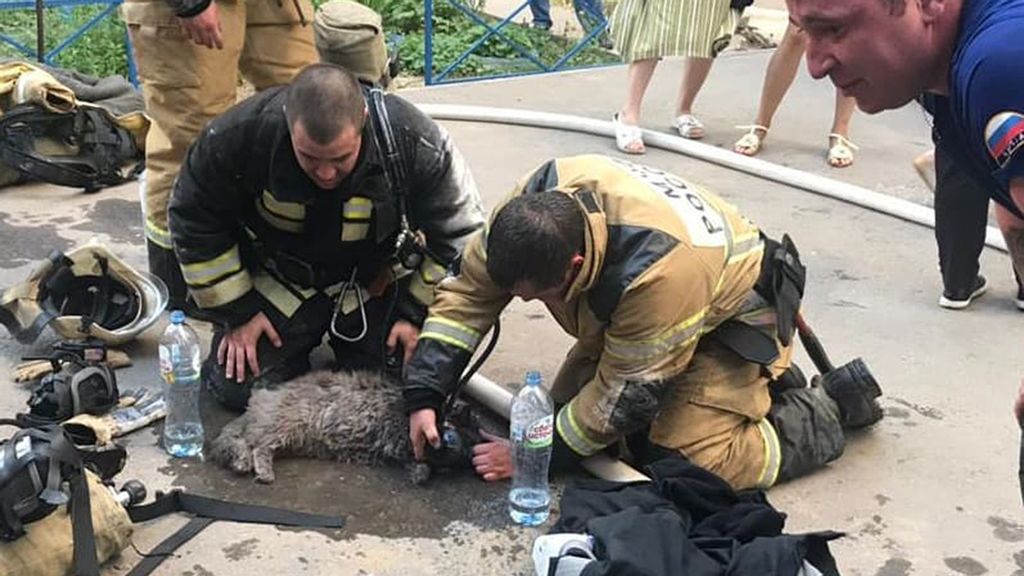 Firefighters give oxygen to cat rescued from fire. (@mchs.34/Zenger)

Muryonka the cat still has nine lives: Russian firefighters successfully resuscitated a feline by that name who was saved from a burning building.

The rescue mission took place after a blaze was reported in a 16-story residential building in Volgograd, a city in southwest Russia, on July 5.

The fire posed a threat for the surrounding area and more that 20 people were evacuated from their homes and several people suffered injuries. Firefighters fought for four hours to contain the blaze.

While firefighters rescued a 9-year-old boy on an upper floor, they also found Muryonka, who was unconscious.

After the boy was brought to safety, firefighters focused on the limp animal, as concerned citizens also gathered around.

Believing the cat was suffering from smoke inhalation, firefighter opened a valve on an oxygen canister to give it oxygen.

In time, they also poured cold water on the animal to wake it up, which proved to be successful.

After she was awake, Muryonka spent some more time taking in oxygen. It was not immediately known if the cat was reunited with its owner.

The local fire station shared pictures and a video of the rescue mission on its social-media page. Local media said the fire was extinguished and its cause is under investigation.

Battling blazes in taller towers, such as the one in Volgograd, is especially challenging for fire crews.

“High rises vary in age, size, height, construction, occupancy type and design features, including the types of fire-protection systems that are installed in them,” according to a paper on the topic from the Federal Emergency Management Agency.

“Fires in high-rise buildings generally require more complicated operational approaches than most structure fires. Tasks that are normally considered routine for most fire departments, such as locating and attacking the fire, evacuating occupants, and performing ventilation can become very difficult in high rises.”

Volgograd, the city where the blaze took place, has had long history and has had several names. Founded in 1589, it was first known as Tsaritsyn, and served as a watch fortress designed to protect Russia’s borders. Due to the efforts of Catherine the Great, in the 1760s foreigners began settling in the city.

During the 20th-century reign of Joseph Stalin, its name was changed to Stalingrad, and it became an industrial hub. Decimated by WWII, the city was rebuilt and subsequently renamed Volgograd in 1961. It now houses several colleges and universities.