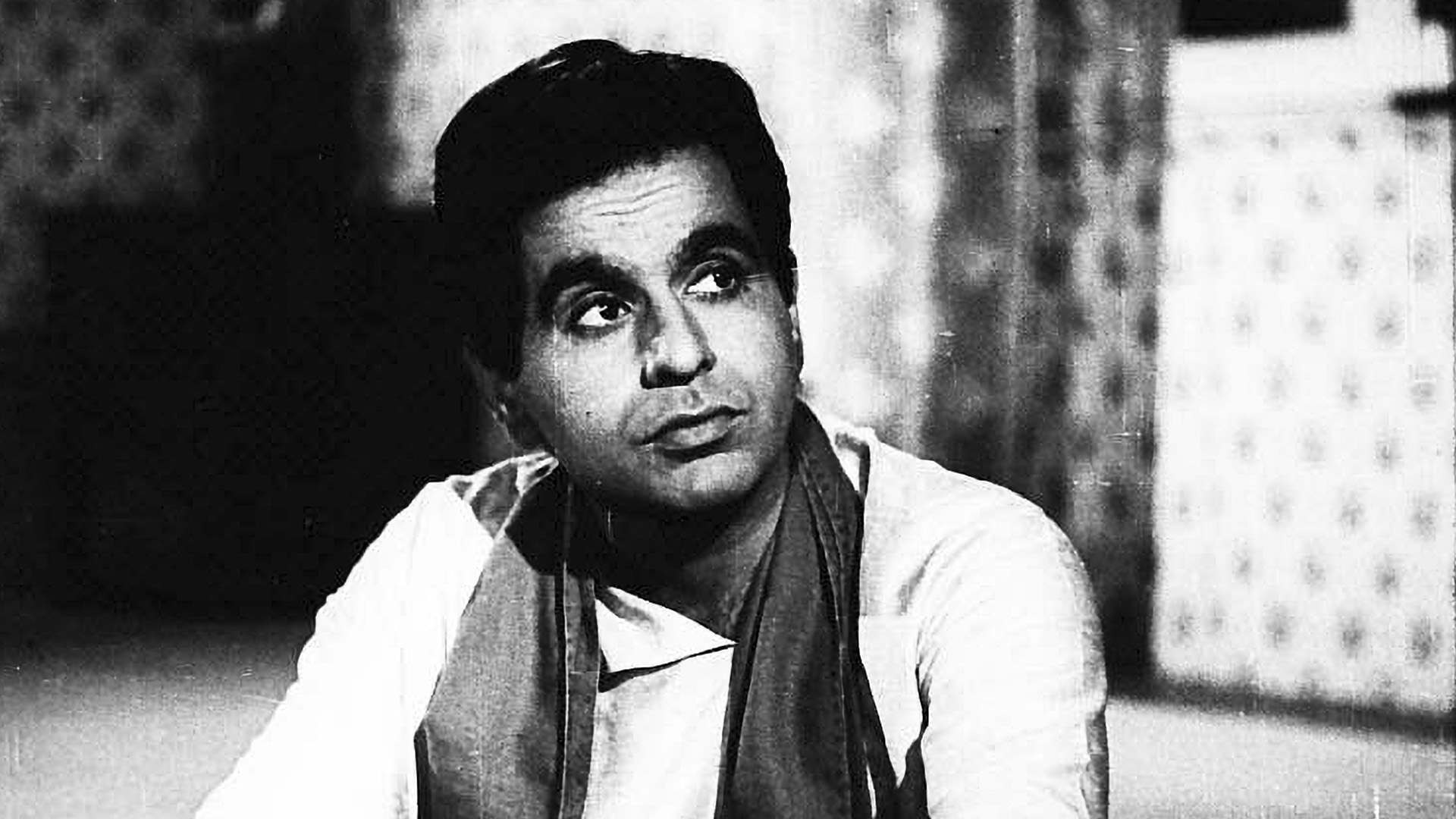 In an acting career that spanned over more than five decades, Kumar starred in more than 65 films and charmed millions of hearts. Especially during the golden era of Hindi cinema.

Popularly known as the “First Khan of Bollywood,” he was born as Muhammad Yusuf Khan in Peshawar, Pakistan, and began his acting career with the screen name, “Dilip Kumar.”

The actor extraordinaire made history by winning the maximum number of Filmfare awards. He was the inaugural recipient of the award and won the best actor Filmfare Award eight times. In his five-decade-long career, he has made enormous contributions to Hindi cinema in several ways, including the introduction of the method acting technique.

His first few films, including his Bollywood debut “Jwar Bhata,” which was released in 1944, could not strike a chord with the audiences. But his scintillating performance in “Jugnu” in the year of Indian Independence, 1947, won hearts, making the film his first major hit.

Born on December 11, 1922, Kumar was one among 12 siblings. The yesteryear actor completed his schooling from the Barnes School, Deolali, Nashik — a city in India’s Maharashtra state, where he grew up in a mixed neighborhood. His childhood friend Raj Kapoor, too, later became his colleague in the film industry.

After running a sandwich stall at Pune’s Army Club in 1943, Kumar wanted to establish a business in Mumbai to contribute to the household income and help his father. His father was a fruit merchant and a landlord who owned orchards in Peshawar and Deolali near Nashik. But fate had other plans: at the Churchgate Station in Mumbai, Kumar met a certain Dr. Masani, who introduced him to actor Devika Rani, then the owner of the renowned film studio in Malad, Bombay Talkies, which has now been shut down.

In his early career, Kumar used to help in the scripting and story-writing department because of his proficiency in the Urdu language. It was upon Rani’s request that Muhammed Yusuf Khan changed his professional name to “Dilip Kumar.” He then embarked on his acting career with Bombay Talkies in the movie “Jwar Bhata.”

In his autobiography “The Substance and the Shadow,” he stated that he had no idea about what acting was.

“I had no clue what acting in front of a camera was. It was something to be studied, learned, and practiced,” he recalled.

During his stint at Bombay Talkies, he met actor Ashok Kumar, who was a star back then. From him, he learned that acting was not about being theatrically bombastic, which was the popular trend in those times.

Post “Jugnu,” he starred in a couple of more hits — “Shaheed” and “Mela” — before finally landing his breakthrough role in Mehboob Khan’s “Andaz.”

When it came to selecting scripts, the actor was meticulous and this explains why Kumar was more than just an actor, writer, filmmaker, poet, or philosopher. His erudition helped him to stand out and evolve a new method of acting. The dignified silences, the thoughtful pauses, and his poetic dialogue delivery were hallmarks of his understated style.

The 1949 romantic drama “Andaz” saw Kumar, starring alongside two other golden stars of that era — Kapoor, and Nargis.

He starred in some major hits in the 1940s but it in the 1950s that he gave a list of hits and tasted real success. “Babul,” “Devdas,” “Hulchul,” “Yahudi,” “Daag,” “Sairat,” “Naya Daur,” and “Deedar” were the classic tragedy films that gave Kumar the title of “The Tragedy King.”

Though he was a teetotaller himself, in “Devdas” he captured the essence of the self-destructive man driven by unrequited love to become a drunkard. Kumar portrayed the grief of his character Devdas, through his hazy eyes and eloquent silences.

Eventually, it was the social drama “Daag” that won the legendary star his first ever Filmfare Award in the main category of the lead actor, also making him the inaugural recipient of the award at the time of its inception in 1954.

Since then, he had won the prestigious award several times and to date continues to hold the record for the maximum Filmfare wins with his eight Black Lady trophies. He shared the position with superstar Shah Rukh Khan who also has eight Filmfare Awards to his credit.

Though tragedy movies brought him great success on the professional front, the method actor got so involved in the characters he portrayed that it affected his mental health giving him bouts of depression.

Kumar switched to a few light-hearted roles after a psychiatrist suggested he do so. He was later seen in Mehboob Khan’s “Aan,” which was also his first film shot in technicolor.

After playing several lighter roles, Kumar finally landed the lead role of Prince Salim in the big-budget magnum opus “Mughal-e-Azam” in 1960, which after 44 years after its original release, went on to be re-released in the full-color format in 2004.

The veteran actor in 1961 also became a film producer, bankrolling and starring in the film “Ganga Jamuna” alongside actor Vyjayanthimala, though he did not produce any other film thereafter. The movie, which itself had elements borrowed from “Mother India,” later became the precursor for several other films, where one brother becomes an outlaw and the other is a policeman.

Kumar excelled in his performance as a rustic villager who was forced to become a dacoit due to circumstances. Made in rural dialect, the film retained those flavors in its music and lyrics.

He delivered a few more terrific portrayals in the 1960s, which include his dual role in “Ram Aur Shyam,” Waheeda Rehman starrer “Aadmi,” and superhit flick “Sunghursh,” in which he again starred opposite Vyjayanthimala.

The legendary actor got married to the then Bollywood diva Saira Banu in 1966.  She was 22 years younger than him. Prior to that, Kumar had been in a relationship with Madhubala and was also linked with Bollywood beauties like Kamini Kaushal and Vyjayanthimala.

Lovingly known as “Dilip Saab,” he was one of the most sought-after celebrities by women. It is said his popularity amongst women was so immense that they used to stand in front of his car, wishing to be run over. On the day of his engagement, a girl from the industry, who was his supposed girlfriend, reportedly took sleeping pills. Kumar had to make her understand that he was in love with Banu. It was only after she was pacified that he returned to his engagement ceremony.

After delivering several back-to-back successes, Kumar went through a career slump in the 1970s, with only a couple of movies like “Bairaag” and “Gopi” performing well at the box office. In “Gopi” he starred alongside his real-life wife, Banu.

Taking a five-year-long hiatus from 1976 to 1981, the “Mughal-E-Azam” actor returned to silver screen in 1981 with the multi-starrer flick “Kranti.” He played a central role among the ensemble cast, which included names like Shashi Kapoor, Shatrughan Sinha, Manoj Kumar and Hema Malini.

After playing the titular role of a revolutionary fighting for the independence of India, he then starred in the 1982 “Vidhata” directed by Subhash Ghai with stars like Shammi Kapoor, Sanjay Dutt, and Sanjeev Kumar among the cast.

Featuring with Amitabh Bachchan in the 1982 super-hit “Shakti” directed by Ramesh Sippy, he won his eighth and last Filmfare Award for the best actor. His next film, the 1984 social crime drama “Mashal” directed by Yash Chopra tanked at the box office, though his performance was critically acclaimed.

Later he also appeared alongside Rishi Kapoor in the 1984 “Duniya” and with Jeetendra in “Dharm Adhikari,” which was released in 1986.

He again collaborated with Ghai in 1986 for the ensemble action movie “Karma.” He was paired for the first time with the veteran actor Nutan, though they had earlier collaborated three decades ago in an incomplete film named “Shikwa.” He was again paired opposite Nutan for the 1989 “Kanoon Apna Apna.”

Kumar starred in the 1991 film “Saudagar” along with veteran actor Raaj Kumar, which later turned out to be his last phenomenal success at the box office and also his last collaboration with director Ghai.

In recognition of his contribution to the film industry for over five decades, he was conferred the Filmfare Lifetime Achievement Award in 1994. In the same year, he was honored with the prestigious Dadasaheb Phalke Award and was later conferred the Padma Vibhushan in 2015.

To mark an official comeback for the actor, film producer Sudhakar Bokade announced the movie “Kalinga” in 1992, but the film got delayed for several years and was eventually shelved. The actor appeared his last in the film titled “Qila” which was released in 1998.

After his acting career came to an end, Kumar was nominated to the upper house of parliament through the Indian National Congress. He served as a Rajya Sabha MP from Maharashtra from the years 2000 to 2006.

Besides acting and politics, the star had also undertaken humanitarian work. While serving as a Rajya Sabha Member of Parliament, he used his Member of Parliament Local Area Development Scheme (MPLADS) fund for improving the gardens of Bandra Fort and Bandstand Promenade.

Whether it was his alleged love affairs with Madhubala and Kaushal, his first marriage, or other controversies like the Nishan-E- Imtiaz award (Pakistan’s highest civilian award) in 1993, which even raised questions about his patriotism, he handled all of that with grace and maturity.

One of the early stars of Bollywood, he rose to a level of prominence never achieved in Indian cinema before. A role model for many, a star, a legend, and the king of the golden era of cinema, Dilip Kumar has left behind a legacy for many acting enthusiasts to enjoy and learn from.

The news of his demise has left a void in the hearts of many, including several Bollywood celebs of yesteryears and the present generation.