An ancient dessert is a refreshing option on summer days in warm cities and beaches. 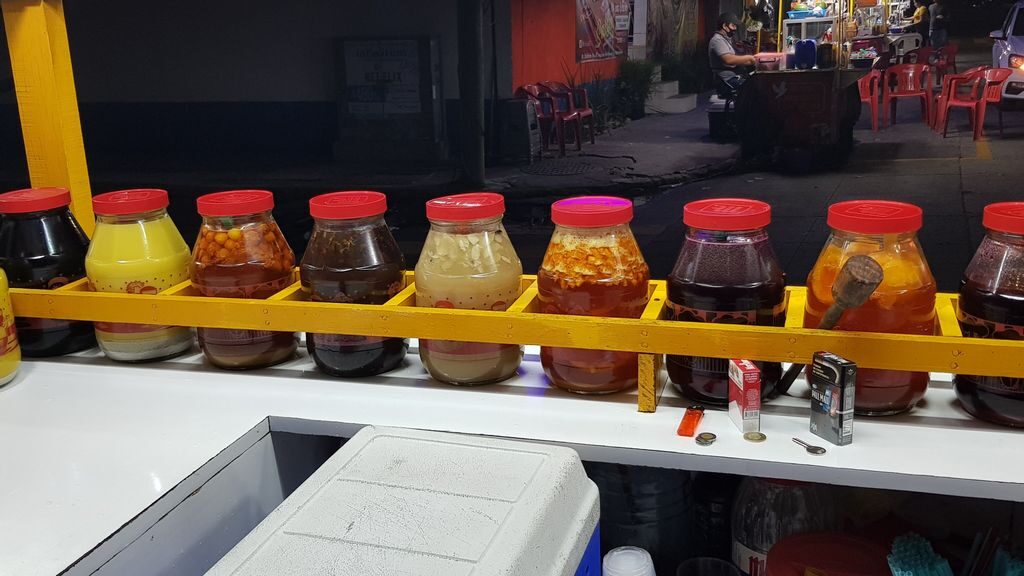 Shaved ice stalls are attractive for their bright colors. Mexicans find them on the streets or in parks, avenues and tourist sites. (Charlie Ramírez/Café Words)

Walking in Mexico’s streets in the middle of summer means doing everything possible to avoid heatstroke, which can occur when the body’s temperature exceeds 104 degrees (40 C). Food stalls offer relief from the overwhelming sun, especially in southern Mexico and along the coasts.

To beat the heat, Mexicans usually buy shaved ice cups. The colorful sales carts are adapted to transport both ice and jars with different syrups.

“I have been selling shaved ice cups for 30 years on the city’s boardwalk,” said Evelio Martínez González, who lives in the Mexican state of Veracruz. “My trade is an honest job. Working at my stall, I have given my family food and shelter and paid for my children’s studies. The tradition of buying a shaved ice cup has never gone out of style. On the contrary, heat is rising, and people buy shaved ice cups to refresh themselves.”

The history of shaved ice dates back to the world’s early civilizations. There are records from the year 27 B.C. of a similar dessert in Rome. People brought snow down from the mountains and added fruit and honey to it.

Arabs in the 8th century enjoyed something similar, mixing ice with juice and edible perfumes.

But shaved ice desserts were not exclusive to the Old World. In the Americas, Aztec emperors already enjoyed them before the arrival of the Spaniards. Servants brought ice from the Pico de Orizaba volcano to the Great Tenochtitlan, which today is Mexico City. To give it a pleasing taste, they added plant-based flavors and fruit juices.

In Asia, during the so-called Empire of Japan period (1868–1947), shaved ice was an exclusive treat for royalty, and cooks made it with ice, sugar and milk.

Today, Mexicans can buy shaved ice cups in street stalls or shops in the main parks, avenues or tourist spots. The mobile carts keep the block of ice in a refrigerated compartment to prevent melting.

Syrups are stored in large jars, attracting children’s attention with their bright colors.

Vendors call the device they use to scrape the ice block an ‘iron brush.’ After shaving the ice with this tool, vendors put it in a glass and mix in the customer’s favorite flavor syrup. Among the most requested flavors are currant, tamarind, lime or the so-called “diablito” [the little devil], a mixture of tamarind, lime and chili pepper.

“Children are generally hesitant about the flavor they will choose due to the colors they see. But they usually end up asking for the most traditional one, which is currant,” said Martínez González.

“People can choose the flavor they want. In the warm season, I sell about a hundred cups a day. When the Norte [a windstorm] hits, the number drops, since people do not eat ice shaved cups when they are cold,” he said.

In addition to ice and syrup, a shaved ice cup can have other ingredients. The traditional gloria [glory] flavor has currant, condensed milk, evaporated milk, mashed banana and cinnamon.