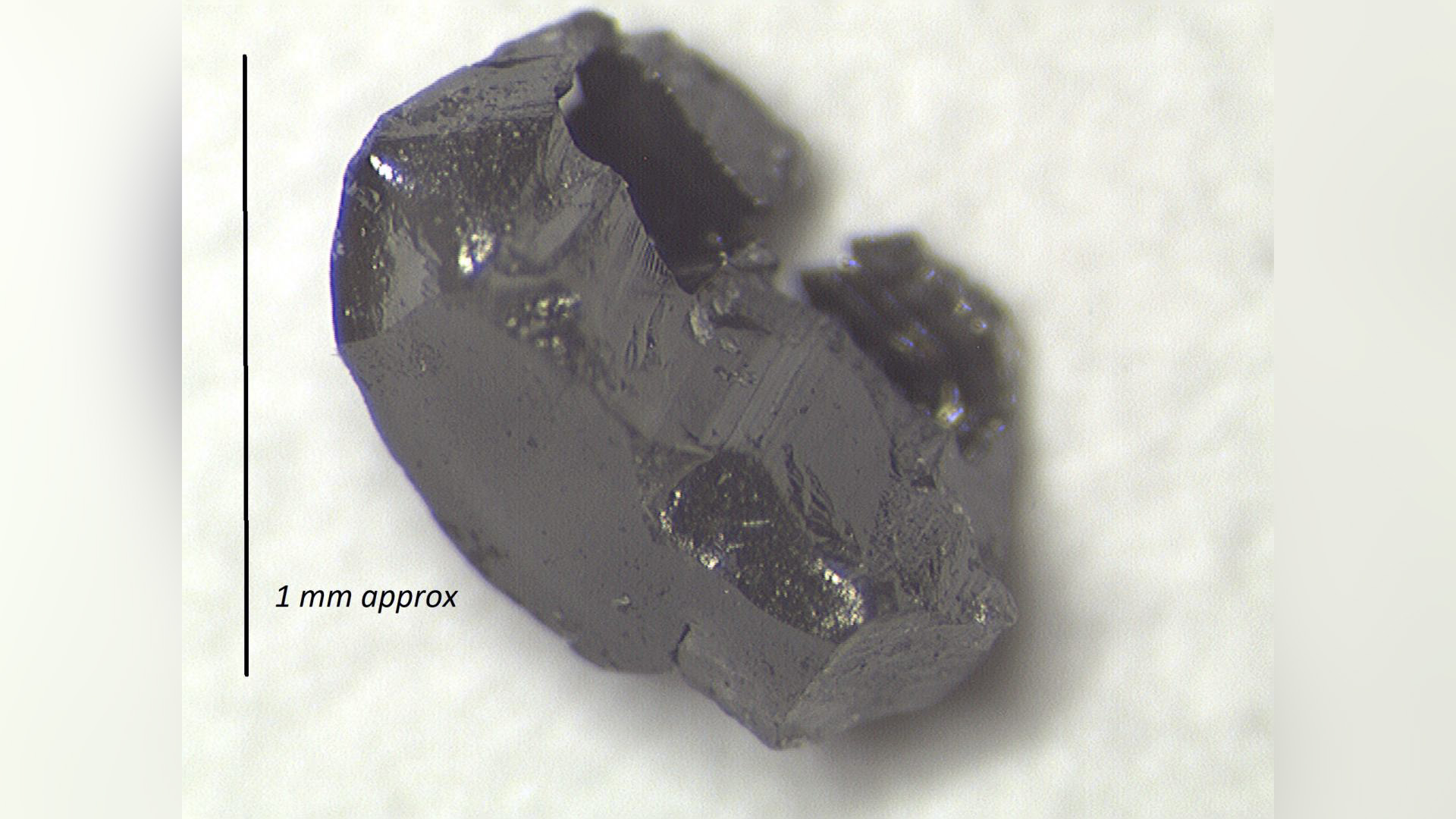 One of the 2.7 billion-year-old diamonds used in this work. (Michael Broadley)

PARIS — A unique study of ancient diamonds reveals that the basic chemical composition of the Earth’s atmosphere, which makes it suitable for life’s explosion of diversity, was laid down at least 2.7 billion years ago.

Volatile gases conserved in diamonds found in ancient rocks were present in similar proportions to those found in today’s mantle, which in turn indicates that there has been no fundamental change in the proportions of volatiles in the atmosphere over the last few billion years.

This shows that one of the basic conditions necessary to support life, the presence of life-giving elements in sufficient quantity, appeared soon after Earth formed and has remained fairly constant ever since.

Presenting the work at the Goldschmidt Geochemistry Conference, lead researcher Michael Broadly from the University of Lorraine, France said the proportion and make-up of volatiles in the atmosphere reflect that found in the mantle, and we have no evidence of a significant change since these diamonds were formed 2.7 billion years ago.

The Goldschmidt Conference is the World’s main geochemistry conference. It is hosted alternately by the European Association of Geochemistry (Europe) and the Geochemical Society (USA). The 2021 virtual conference commenced on July 4.

Volatiles, such as hydrogen, nitrogen, neon, and carbon-bearing species, are light chemical elements and compounds, which can be readily vaporized due to heat or pressure changes. They are necessary for life, especially carbon and nitrogen.

Not all planets are rich in volatiles; Earth is volatile-rich, as is Venus, but Mars and the Moon lost most of their volatiles into space.

Generally, a planet rich in volatiles has a better chance of sustaining life, which is why much of the search for life on planets surrounding distant stars (exoplanets) has focused on looking for volatiles.

On Earth, volatile substances mostly bubble up from the inside of the planet and are brought to the surface through such things as volcanic eruptions.

Now French and Canadian researchers have used ancient diamonds as a time capsule to examine the conditions deep inside the Earth’s mantle in the distant past. Studies of the gases trapped in these diamonds show that the volatile composition of the mantle has changed little over the last 2.7 billion years.

“Studying the composition of the Earth’s modern mantle is relatively simple,” Broadley said.

“On average, the mantle layer begins around 30 kilometer (18.6 miles) below the Earth’s surface, and so we can collect samples thrown up by volcanoes and study the fluids and gases trapped inside.”

“However, the constant churning of the Earth’s crust via plate tectonics means that older samples have mostly been destroyed. Diamonds, however, are comparatively indestructible, they’re ideal time capsules,” said Broadley.

“We managed to study diamonds trapped in 2.7 billion-year-old highly preserved rock from Wawa, on Lake Superior in Canada. This means that the diamonds are at least as old as the rocks they are found in, probably older. It’s difficult to date diamonds, so this gave us a lucky opportunity to be sure of the minimum age.”

Broadley further said, these diamonds are incredibly rare and are not like the beautiful gems we think of when we think of diamonds. We heated them to over 2000 C to transform them into graphite, which then released tiny quantities of gas for measurement.

The team measured the isotopes of Helium, Neon, and Argon and found that they were present in similar proportions to those found in the upper mantle today.

This means that there has probably been little change in the proportion of volatiles generally and that the distribution of essential volatile elements between the mantle and the atmosphere is likely to have remained fairly stable throughout the majority of Earth’s life.

The mantle is the part between the Earth’s crust and the core. It comprises around 84 percent of the Earth’s volume.

“This was a surprising result. It means the volatile-rich environment we see around us today is not a recent development, so providing the right conditions for life to develop,” said Broadley.