From Patagonia To Mexico: The Family That Left Everything To Go On An Adventure

The self-styled “6 traveling ants” sold their possessions to go on a journey but are now stranded in Mexico.
By Shantal Romero July 7, 2021
Facebook
Twitter
Linkedin
Email 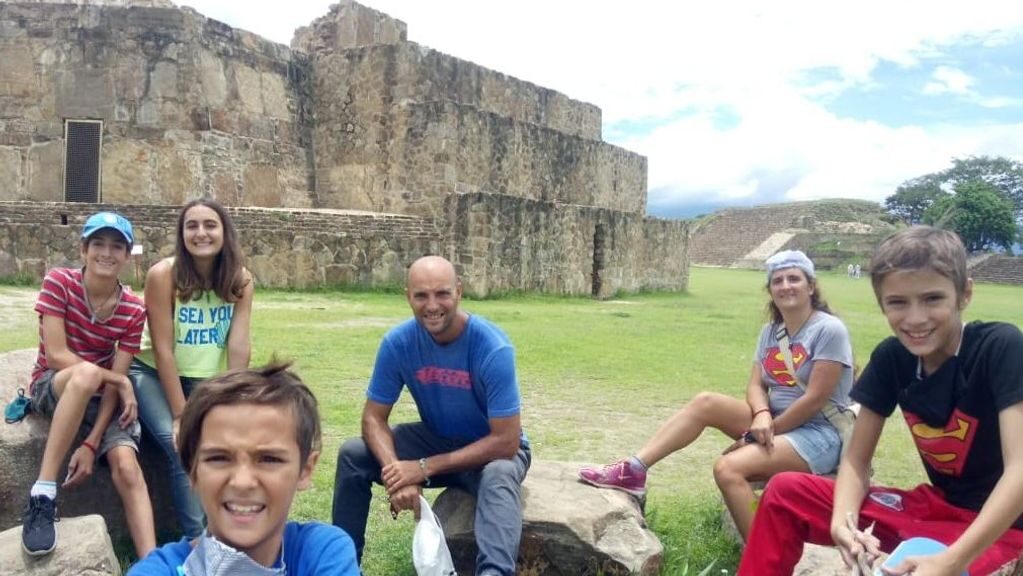 MEXICO CITY — Graciela D’Abate and Claudio Hoj, as well as their children Ludmila, Matías, Nicolás and Tomás, are members of a family originally from San Martín de los Andes, in Patagonia, Argentina. They have been traveling by truck across Latin America for the last two and a half years. By chance, they are currently stranded in Mexico.

Claudio was a cook on a restaurant’s night shift, and in the morning, he and Graciela created handmade wooden toys for their business Ludmanito Didácticos.

Two years ago, Ludmila, who is now 16, wanted to travel to Cancún for her fifteenth birthday. But, knowing that a trip for six people would be expensive, her parents decided instead to make a road trip from Argentina to Mexico.

The start of a family adventure

Ludmila, Matías, Nicolás, and Tomás accepted, and the family began six months of planning to make the best trip possible:

Claudio left his job at the restaurant, and the family waited for the children to finish their school year. They sold all their furniture, bought the recreational vehicle they would travel in, and ensured that it was working. In December 2018, they began their ‘6 traveling ants’ adventure.

The original idea was to travel for only a year or two, but the COVID-19 pandemic complicated everything, forcing them to remain in Mexico since they cannot return to Argentina by road.

“We are happily stranded in Mexico, and we will see if we can stay here for another six months since unfortunately we are unable to return to the other countries. But, unfortunately, each one of us needs to do a [COVID-19] test to enter another country, and we do not have enough money for all of them,” said Graciela D’Abate.

To cover their expenses in each country, the whole family works for their business Ludmanito Didacticos. They craft wooden puzzles, brain teasers for all ages, fridge magnets with engraved quotes, and postcards that they sell from their RV.

“We usually stop in public parks because they are safer and quieter. That way, we are better prepared to show our products to people interested in the story of our adventure,” said Claudio Hoj.

So far, in addition to having already seen Chile, Peru, Bolivia, Ecuador, Colombia, Panama, Costa Rica, Nicaragua, Honduras, El Salvador, and Guatemala, the family has traveled to 21 states in Mexico.

Why are they called the ‘6 traveling ants’?

Ludmila, 16, says they relate these insects to humans because they are tiny and humans in the world look just as small.

“Furthermore, ants work as a team, and we do the same when we do our puzzles. I cut the wood, Graciela paints them, Ludmila varnishes them, Matías sands down the edges, and Nicolás and Tomás put them together,” said Claudio Hoj.

The experiences have marked them for life.

As nomads who have met many people and have lived for long periods in different Latin American countries, they carry in their hearts inspiring memories they will never forget.

“In Peru, we had bad luck when selling our puzzles, but in Ecuador, we met a girl who gave us contacts and helped us sell a lot. Her contacts keep asking us to know when we are going to come back so that we can sell more products,” said Matías, 15.

“An experience that we are bound to remember forever happened in Colombia when the RV broke down and a man asked me if we needed help. I said no because it was already night, and we did not feel safe. However, he understood and told us, ‘I’ll be back tomorrow.’ The next day, he showed up, took me to the repair shop, invited me to dinner, and did not leave until the RV was ready,” said Claudio Hoj.

The youngest members of the family, the twins Nicolás and Tomás, 10, also have some anecdotes.

“When we were in Chile, we discovered that we had an extra passenger. A rat had entered the RV and traveled alongside us. We had to buy a trap, and it died,” said Nicolás.

“We were in Playa Azul in Mexico, and we stopped in a square near the shore. There were some soccer fields, and we went to play there, and that there we met a lot of friends,” said Tomás.

However, not everything has been rosy. The ‘6 traveling ants’ have also had bad experiences during their trip.

“Until just a month ago, we did not have any bad experiences. However, when we were in Queretaro, a traveler lent us their house for three weeks. We had left the RV parked outside, and, one night, a neighbor told us that someone had broken into our vehicle. The robbers stole everything that we had on the front of the vehicle. One of the things they stole was a solar panel that converts sun rays into energy. We brought it up on social media, and a person we had met in Tepoztlán told us that they would buy a solar panel for us so that we could continue with our trip,” said Graciela D’Abate.

For now, the family’s goal is to find a way to return to Argentina to resolve several urgent civil matters, but they must first raise enough money to do so.

After saving enough money, they wish to continue their journey through Brazil, Paraguay, and Uruguay. They also want to travel around their home country in their RV, christened ‘La Hormiguera’ (The Anthill).

When thinking of their future plans, the ‘6 traveling ants’ hope to have a similar journey in Europe, as well as one across the United States and Canada.

«Previous Post
Walking Among A Sea Of Butterflies»Next Post
Why Were Dinosaur-Era Shark Teeth Found At Jerusalem Dig?