‘Living dinosaur' white sturgeon was tagged and released back into the wild.
By Joseph Golder July 6, 2021
Facebook
Twitter
Linkedin
Email 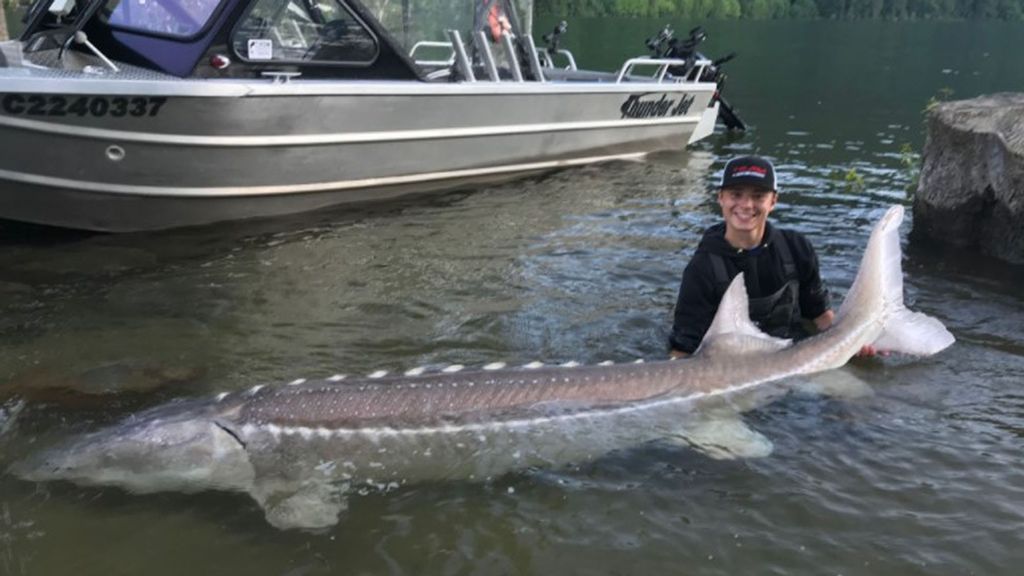 A Canadian teenager recently caught — and released — a 20-foot white sturgeon he landed while fishing with friends.

Bergen notes white sturgeon are prehistoric fish, meaning they have been in existence since the Early Cretaceous period more than 100 million years ago.

“Unlike most fish, sturgeons have no bones,” the teen said. “Their strong, unique shape is made up of cartilage and tough meat, on top of that is a thick skin which is hard to penetrate.”

He also notes that sturgeons have scutes (bony plates) on their body. “These scutes, along with a super-thick skin, serve as the sturgeon’s armor.”

Bergen attributes his knowledge about the fish he catches to a life-long interest in that activity.

“I was introduced to fishing at a very young age by my dad. I grew up fishing, and then turned my hobby into a lifestyle. My favorite place to fish is on the Fraser River, it’s my home.”

Bergen notes that on the day in question, he’d actually caught two sturgeons, one big and one small. He gives both fish quick kisses before releasing them.

“We don’t raise the fish; we catch, tag (collect data) and release them,” he said. “There is a group of people who collect data to watch the white sturgeon population grow. They learn more about the fish, what areas they are in certain times of the year, how much they grow a year, and if they are healthy or injured.”

The Fraser River is an excellent environment for such research.

“The river and its many tributaries have one of the largest and most stable population of sturgeon and this can be attributed to the year-round abundance of food and conservation efforts by offering a catch and release fishery,” notes the Great River Fishing website. “During peak periods of the main season, the sturgeon gorge themselves on the abundance of food present in the system, and it is not uncommon [for fishermen] to hook into 10 to 20 sturgeon a day.”

“This part of British Columbia offers many healthy rivers and lakes, and these estuaries allow for one of the world’s largest salmon runs to flourish,” Great River notes.

«Previous Post
VIDEO: Yappy Ever After: Pup Barks At Drainpipe To Save Trapped Kitten»Next Post
Formula Gone: Man Who Stole F1 Ace’s Ferrari Found In Jail After Two Years On The Run