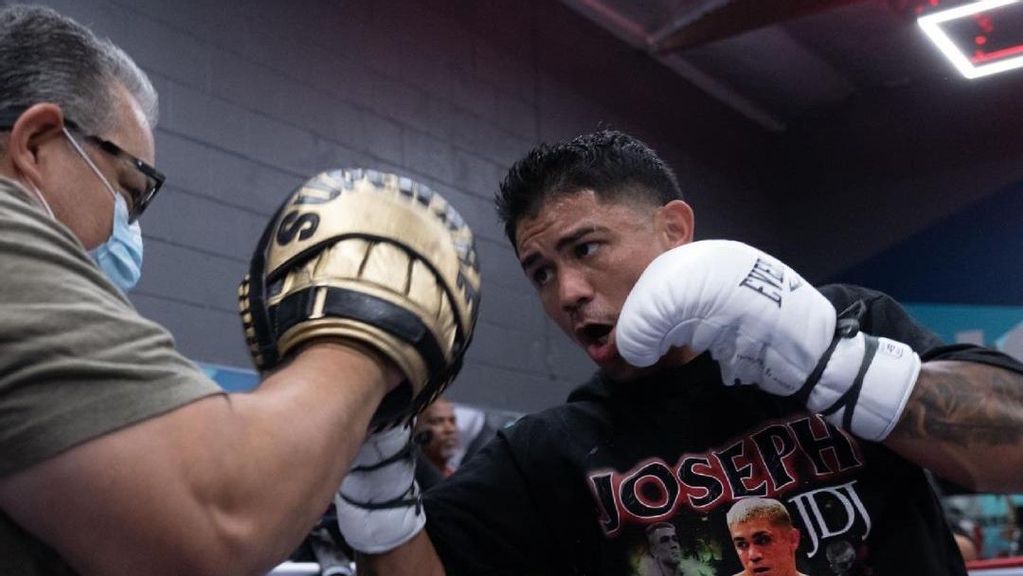 Joseph “JoJo” Diaz Jr. is moving up to the lightweight division for his July 9 match against Javier Fortuna. (Sye Williams)

Boxing comes naturally to 2012 U.S. Olympian Joseph “JoJo” Diaz Jr. However, it was the business part of boxing that gave Diaz the most trouble, as he eventually discovered that his manager didn’t have his back.

Now, free from that situation and entering a new weight class, Diaz feels poised to put on a performance of a lifetime.

Diaz, whose record stands at 31-1-1, including 15 knockouts, moves up to the lightweight division on Friday night to compete for the WBC interim title against Javier Fortuna (36-2-1). The bout will be stream live on DAZN.

Diaz opens up about his managerial setback, how fatherhood changed his outlook on life and his career, and much more.

Zenger: You’ve said that this is your best training camp ever. Why is that?

Diaz Jr: I would say, more mental focus. Just cut all the distractions out. Having my team surround me and me just being able to work out day in and day out. Not only that, I feel like I don’t have to lose as much weight as I have had to in previous camps. I started camp at a good weight, and now that I don’t have to drop the extra 5 pounds going to 130, I feel like my body is more energized. I feel like this is the best me, and the best my body has ever felt by far.

Zenger: It appeared you had several distractions in the past. Are you confident that all of that is behind you now?

Zenger: Being that Javier Fortuna has dealt with so many opponents pulling out of fights, I’m sure you are expecting him to be highly motivated on July 9.

Diaz Jr: Oh absolutely. I’m not taking Fortuna lightly. I know he is one of my toughest opponents to date. These guys really haven’t felt my power and they really haven’t felt the 100 percent “JoJo” going into a fight. For the Tevin Farmer fight, I was about 85-90 percent, and I did a really good job. People loved the way I fought that one. I feel like now my whole body is good. I don’t have any injuries, I don’t have to cut as much weight, I’ve built a lot of strength.

I feel like it’s going to be the best performance of my career. It’s going to set that standard and make a statement to all the 135 pounders. I know Javier is a dangerous opponent, but I want to take on the toughest challenges. I want to challenge myself both physically and mentally. That way, when I do accomplish these goals, it will all be worth it.

Zenger: You’re a southpaw (lefty) and Fortuna will be the fifth consecutive southpaw you’ve faced. You’re either a lunatic or very comfortable fighting guys that mirror your stance.

Diaz Jr: (Laughing). I’m really comfortable now, man. Especially knowing that I fought five lefties in a row. I kind of don’t know how to fight a damn orthodox fighter now. I gotta get used to that again. That’s a key factor for me going into the fight, Fortuna is an awkward southpaw. He likes to throw punches from different angles, but it’s going to be very beneficial for me knowing that I have gained all that experience fighting all these southpaws. I feel like the punches he’s landed on previous opponents, he’s not going to be able to do that with me because I already know his punching positions, his foot positions and where he’s going to be throwing punches, thanks to all the experience that I’ve had fighting southpaws.

Zenger: What type of fight are you expecting?

Diaz Jr: I’m expecting an all-out war, man. I think we’re going to go out there and trade blows in a technical way, not just sloppily trading blows. I’m really going to showcase my full talent, my power, my precision, my accuracy in my punches, my placement and counterpunches. I’m ready for whatever it is he brings to the table. If he thinks that he can overwhelm me with his power, so be it. Let’s test the water and I’m going to make him feel my shots. I’ve fought two of the best boxers in the game already, Tevin Farmer and Gary Russell Jr. I feel like the experience I gained with those guys will allow me to adjust to whatever Fortuna tries to bring to the table.

Zenger: You are entering a very hot lightweight division. Where would you like a win to place you within the division?

Diaz Jr: After this fight, I want everybody to place me high in the 135-pound division. I’m fighting the boogeyman that everyone has ducked. I’m going to go out there and really demolish this guy. A lot of people are afraid of him, but I know what I’m capable of doing. And I’m going to go out there and execute a really good game plan and go perform at my best and put on a spectacular performance. I’m just going to let everybody judge after the fight. I’ll let people do the talking and I’m going to let my work do the talking.

Zenger: How has becoming a father last year changed your approach to your career?

Diaz Jr: I adore everything about that kid. Now that I have something that I’m looking after, and someone that depends on me to take care of them, it’s extremely motivating. Fatherhood is the best thing that’s ever happened to my life. I put that over everything, my career included. My son is my everything and he’s the most to me. I know that in order for me to be the best father, I have to take care of everything that I can within my professional career, so that my son could have the best life possible.