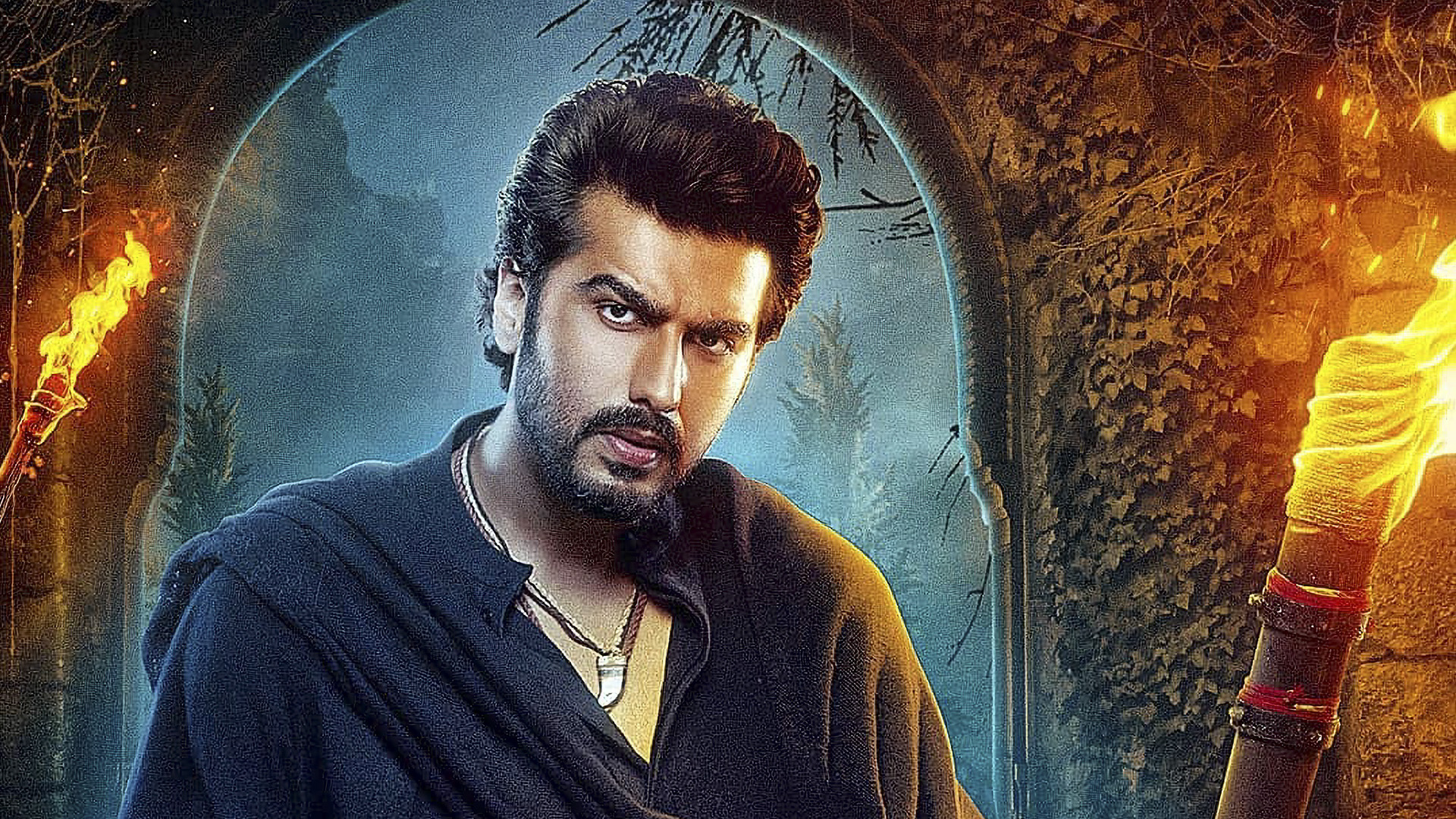 Arjun Kapoor will soon treat his fans with his new character "Chiraunji" in his upcoming film "Bhoot Police." (Arjun Kapoor/Facebook)

Kapoor took to Instagram to introduce his character from the forthcoming film that also stars Saif Ali Khan, Jacqueline Fernandez, and Yami Gautam.

In the first look poster, Arjun has an angry young man vibe. He is seen wearing an oversized black outfit with a knife-shaped pendant and studded rings. Giving an intense look, he is holding a torch in his hand.

“Unravel the mysterious door of supernatural powers with laughter!” said Kapoor in the post.

Earlier in the day, the filmmakers dropped the first look poster of Khan’s character.

Khan’s character, “Vibhooti,” is a ghostbuster in the film. Indian actress and Khan’s wife Kareena Kapoor Khan took to Instagram to share the first look poster of Khan’s character.

Sporting a leather jacket paired with a black shirt, the poster features Khan in a calm yet intriguing avatar. In the first look poster, he is seen holding a weapon that seems to help him catch ghosts.

“Don’t fear the paranormal and feel ‘Saif’ with VIBHOOTI,” Kapoor Khan said in the post. “#BhootPolice Coming soon on @disneyplushotstarvip.”

“Bhoot Police” was shot in the north Indian state of Himachal Pradesh late last year. The upcoming film is helmed by Pawan Kripalani, who has earlier directed films like “Ragini MMS” and “Phobia.”

The film will trace the story of a group of ghost hunters and their hilarious adventures.

“Bhoot Police” marks the first collaboration between Khan and Kapoor, who is currently dating actress Malaika Arora, a close friend of Khan’s wife. Ramesh Taurani and Akshai Puri are producing the upcoming film.

“Bhoot Police” is slated for a direct-to-digital release on Disney+ Hotstar. The forthcoming horror-comedy was earlier scheduled for a theatrical release on September 10. However, the makers reportedly confirmed its digital release in June.

Kapoor is a co-owner of FC Pune City, an Indian Super League franchise. He supported and backed the Earth Hour campaign in India in 2014 and again in 2015. During this time, he served as the Indian ambassador for the World Wide Fund for Nature (WWF). In addition to raising awareness for Earth Hour, he also assisted in conservation efforts in the Sundarbans region of India. He endorsed the United Nations Global Goals campaign in 2015. He represented India at the Global Citizen Festival in New York City, where he gave a speech outlining India’s successes and problems.