The foundation is to plan ahead of time and be prepared. 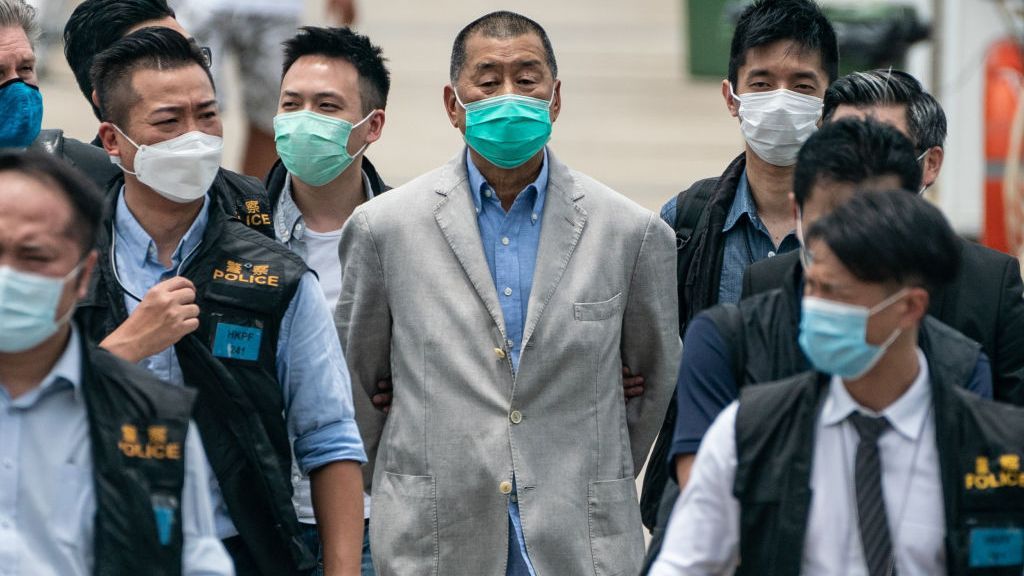 Hong Kong media tycoon and Apple Daily founder Jimmy Lai (C) is escorted by a group of police to the Royal Hong Kong Yacht Club Shelter Cove Clubhouse for evidence collection on August 11, 2020 in Hong Kong, China. Lai was arrested, along with several of his family members and associates, for alleged collusion with foreign forces under the new national security law. (Photo by Anthony Kwan/Getty Images)

A few years ago, Hong Kong was as normal as San Francisco or Vancouver. Today, civil rights of office workers are changing — creating challenges for executives who have to balance compassion with productivity.

China’s 500-police officer raid of Next Digital’s pro-democracy Hong Kong newspaper, Apple Daily, and arrest of employees is the type of event that executives dread.

The paper reported that three executives and two senior journalists were arrested. Next Digital CEO Cheung Kim-hung and editor-in-chief Ryan Law were charged with “collusion with foreign forces” under Hong Kong’s year-old national security law, according to the paper’s Twitter account, which has now been shut down. Both executives have been denied bail.  Other arrests took place, and by Sunday, June 27, a seventh journalist, editor Fung Wai-kong, was arrested as he waited on a flight to take off to London.

Human rights groups, leading democratic governments and United Nations officials  heavily criticized the actions. In response to a question, a State Department spokesperson said “we strongly condemn” the actions and “are deeply concerned by Hong Kong authorities’ selective use of the national security law to arbitrarily target independent media organizations.”

And still, the executives and journalists are detained. The high-profile nature can make people forget how frequently problems can develop for employees, whether a journalist on a flight that Belarus diverts and forces down to take the person prisoner, or those stationed in Myanmar during the recent military coup.

For corporate executives, the immediate lesson to draw is not necessarily political but practical. There are many ways in which employees can be at risk, whether authoritarian crackdowns, political turmoil, street protests, violence, kidnappings as a business, natural disasters, and more. Danger can come directly to employees or to workers throughout a supply chain.

“The world is not very peaceful and there’s a lot going on in different parts,” says Dr. Guo Yu, lead analyst for Asia-Pacific at risk analyst firm Sibylline. “[Executives] need to be fully informed of the latest situations there and how they may involve.” They also need to undertake planning in advance with resources and tactics at the ready for the events a company and its employees wish will never come.

The first step is to understand things that might happen in a region. Professional services and organizations can provide critical information and warnings. Employees on the scene can also be an important source of intelligence, though a company must pay attention.

There also needs to be planning. “There might be some scenario that if this happens, [that is the response],” Yu adds. “What is the security of our employees and what is the likelihood of this scenario happening versus another scenario? Planning is critical, especially for corporate security, and never to think once you planned it, you’re done. They have to constantly update it taking onboard the latest information, doing the latest assessment, and sending information to their employees.”

Companies must always be ready to respond quickly. For example, when Belarus forced a Ryanair flight to land so authorities could detain a dissident journalist, passenger carriers responded immediately.

“All of a sudden, many European airlines, even before swift response from the EU and UK, decided to avoid the Russian airspace,” Yu says. “That’s the level businesses need to go at and respond very quickly to the local situation.”

Readiness is not just updated scenario planning, but preparation and advanced deployment of resources, should they be needed.

For example, in various parts of the world, kidnappings are common. The kidnappers take someone and want to exchange the person for money. Typically, ransom gets the victim returned because it’s a business.

“What I learned over the years is it’s not good business for that kidnapper to hurt that individual,” says Dan Hanson, senior vice president of management liability and client experience at Marsh & McLennan Agency. “There’s going to be a whole lot more people chasing them than if they get the money.”

That’s a big reason companies working in areas prone to such activity need to be ready such things as insurance and the right contacts. Hanson has seen such policies used. “It’s our job to help you out, but also so it doesn’t become public,” he says. Publicity can attract additional similar events.

Sometimes government policy forbids the transfer of money into certain countries. “This is my assumption of what happens: someone probably does go in there with a briefcase of cash and gets something done,” Hanson says. The wise thing might be to refrain from having a presence in such areas in the first place. Having a local policy, while it means additional cost, can make an important difference.

Perhaps the biggest step is to realize that such planning and protection is not a pointless cost, but something that positively enables business. Because, when it comes to human life, trying to cut corners is a terrible idea.