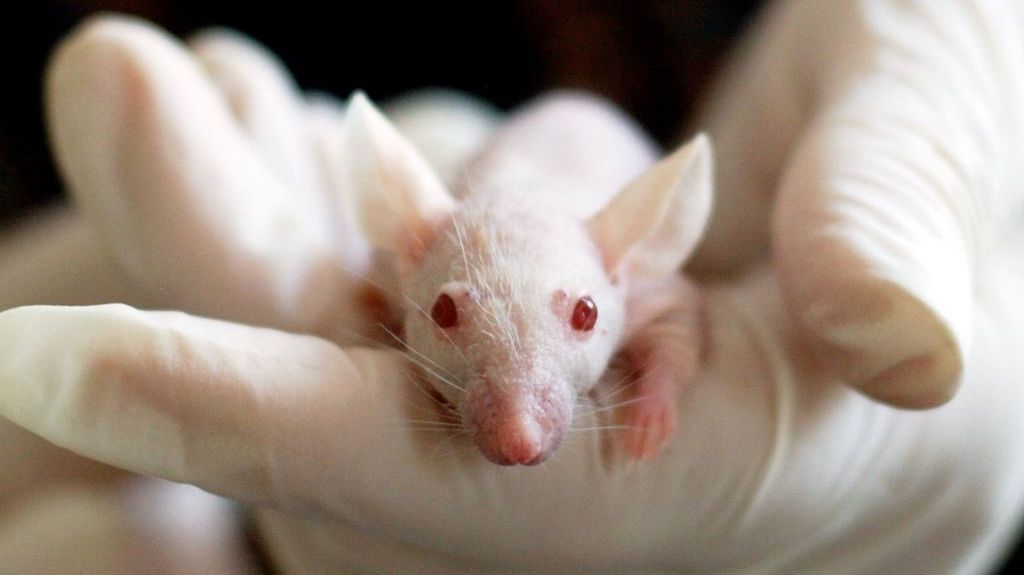 A baby laboratory mouse similar to those force-fed human feces during an NIH-funded research project into the link between the gut and anxiety and depression (Pixabay/Pexels.com)

The National Institutes of Health has hiked spending on animal experiments carried out abroad by almost a quarter in the last two years, sending cash to foreign countries for such purposes as addicting fish to drugs and nicotine, and feeding human feces to rodents, an analysis by taxpayer watchdog White Coat Waste Project has found.

The agency spent an estimated $140.3 million on foreign animal research in fiscal year 2020, up from roughly $114 million in 2018, with funding going to studies in at least 29 other countries, reports the project, which aims to end all public funding of research on animals. Its founder and president, Anthony Bellotti, is a Republican strategist who previously campaigned against Obamacare and Planned Parenthood.

The top recipients of NIH funds in 2020 were institutions in wealthy countries, with German and Canadian institutes receiving the most taxpayer dollars sent abroad for animal testing that year. Other major grant recipients included entities in Australia, the Netherlands, Switzerland, South Africa, the United Kingdom, Sweden, Taiwan and Ghana.

The experiments mentioned at the start of this story include one at the United Kingdom’s Queen Mary University of London in which researchers addicted zebrafish to nicotine and ecstasy.

The goal of that project is to identify genes which may influence addiction and help identify individuals at risk of substance abuse. The project has received around $1.1 million in NIH funding since 2018, including $428,249 in 2020.

Other animal research projects recently funded by the NIH have involved a $242,641 study that involved addicting pregnant rodents to alcohol and causing their babies “chronic unpredictable stress” to study the effects of prenatal alcohol exposure, at the University of British Columbia in Vancouver, Canada.

Also funded was a $166,212 study into the consequences of alcohol abuse by training mice to binge-drink alcohol in the dark at University of Concepcion in Chile.

Canada’s McMaster University in Hamilton, Ontario, was given $633,250 to force-feed genetically modified mice human feces then measure their anxiety, to explore the role bacteria in the intestine play in anxiety and depression.

At Nigeria’s University of Lagos pregnant rats were forced to eat high-salt diets to study salt-sensitive hypertension in a study funded in 2020 for $97,738.

The NIH has additionally sent taxpayer money to China, where the agency has provided more than a half-million dollars since 2015 to the Wuhan Institute of Virology to study coronavirus-infected bats.

Those experiments have come under recent scrutiny in the wake of the global COVID-19 pandemic, amid claims that the laboratory in Wuhan could be a place of origin for the health crisis.

“It’s indefensible that the NIH is shipping tens of millions of tax dollars overseas to animal testing labs and schools in foreign countries that don’t need our money, like the U.K., or shouldn’t get it, like China,” White Coat Waste Project’s Bellotti told Zenger. “NIH foreign aid ranges from the dumb to the dangerous.”

But the NIH — which is housed within the U.S. Department of Health and Human Services — and other scientists say such experiments are necessary to learn how to prevent, treat and cure human diseases and develop treatments and medications.

“You really don’t know what’s going to happen until you put your test compound into a living system,” Cindy Buckmaster, board chair for Americans for Medical Progress, told Zenger. “We need to know what this compound is actually going to do in a fully intact living system before we go ahead and put it in people.”

Buckmaster notes that such use of animals is not new.

“What treatments have come from animal research? The answer is: What hasn’t? Every single treatment, vaccine, surgical intervention, diagnostic test, everything that you know of that you consider to be a very important medical convenience, it was all informed by animal research because it all had to start with understanding the biological system.”

Eva Maciejewski, director of communications and media relations at the Foundation for Biomedical Research, added that animal research and testing are “necessary to develop treatments and vaccines that are safe and effective for humans to use, and to treat and vaccinate our pets.”

“Breakthroughs like the organ transplants, blood transfusions, cancer treatments, neural implant devices, flu and coronavirus vaccines demonstrate the importance of animal research,” she told Zenger. “Vaccines and treatments for COVID-19 would not have been developed and received FDA approval without laboratory animals.”

The NIH said said in a public statement: “We can study animals in ways that we cannot study people for many reasons. Animal studies conducted in the laboratory allow scientists to control factors that might affect the outcome of the experiments.”

“These rigorous controls allow for more precise understanding of biological factors at hand and provide greater certainty about experimental outcomes when developing treatments.”

Alternative testing methods that don’t involve live animals are used in many cases instead of live animals, the NIH also noted.

Many lawmakers — Republicans and Democrats alike — and some veterinary experts have criticized the use of animal experiments as costly and inhumane and are urging the federal government to use alternative methods more often.

Some have been putting pressure on the NIH, as well as other American agencies, to phase out animal research conducted domestically and to cut funds sent to other countries, where these tests are not always subject to the same standards as U.S. laboratories.

“I’ve seen firsthand how federal regulators can’t even prevent waste and abuse at animal research and testing labs right here in the U.S., so there’s no way they can do so at facilities 7,000 miles abroad where they have no authority and even less transparency,” Dr. Jim Keen, a former animal research veterinarian who worked in federally funded laboratories but now campaigns against testing and has co-operated with the White Coat Waste Project, told Zenger.

“Taxpayer funding of animal research in foreign countries raises serious concerns about animal welfare, transparency and research oversight that the NIH has not adequately addressed,” Keen, who was recently a fellow at Harvard Law School’s Animal Law and Policy Program, added.

Dr. Alka Chandna, vice president of laboratory investigations cases at People for the Ethical Treatment of Animals, said that NIH grants can be awarded to both facilities abroad and U.S. experimenters, who may then have the study conducted in another country “no matter how cruel.”

“Experiments on animals are always cruel and should be ended, wherever they occur. But animals can be tormented in other countries in ways that that wouldn’t be done in the U.S. — despite our country’s paltry animal protection laws,” Chandna told Zenger. “NIH-funded American experimenters are collaborating with foreign laboratories that are little better than CIA black-sites for torture. The U.S. government needs to modernize its research program, acknowledge the failure of experiments on animals to lead to cures for humans, and stop the ethics dumping to countries where animals have zero protection.”

Pressure from lawmakers and experts, coupled with polling from Pew Research suggesting that a majority of Americans (52 percent) oppose the use of animals in scientific research, has led many departments to scale back these experiments at U.S. facilities.

Last month, the Department of Veterans Affairs confirmed that it has cut dog experiments by 75 percent in the last five years, its lowest point in more than a decade, and cat research by 70 percent. It will fully phase it out by 2025.

A House Appropriations subcommittee took the development a step further on June 25 by voting to defund all cat and dog experiments at the VA.

Previously, the Department of Agriculture ended all of its feline experiments in 2019 and moved to adopt out the remaining laboratory cats following widespread criticism.

Members of Congress have also taken aim at funding for foreign animal testing, with the Senate voting in May to eliminate taxpayer funding for animal research at labs throughout China, including the one in Wuhan that’s been the focus of international attention as the possible origin site of COVID 19.

“Big government spending is out of control when millions of taxpayer dollars are being sent to dangerous bio-agent labs in China and to other foreign countries to conduct risky experiments, many times harmful trials involving animals,” Rep. Fred Keller (R-Pa.), a member of the House Committee on Oversight and Reform who is co-sponsoring a bill in the chamber to cut funding for the Wuhan laboratory, told Zenger in a statement.