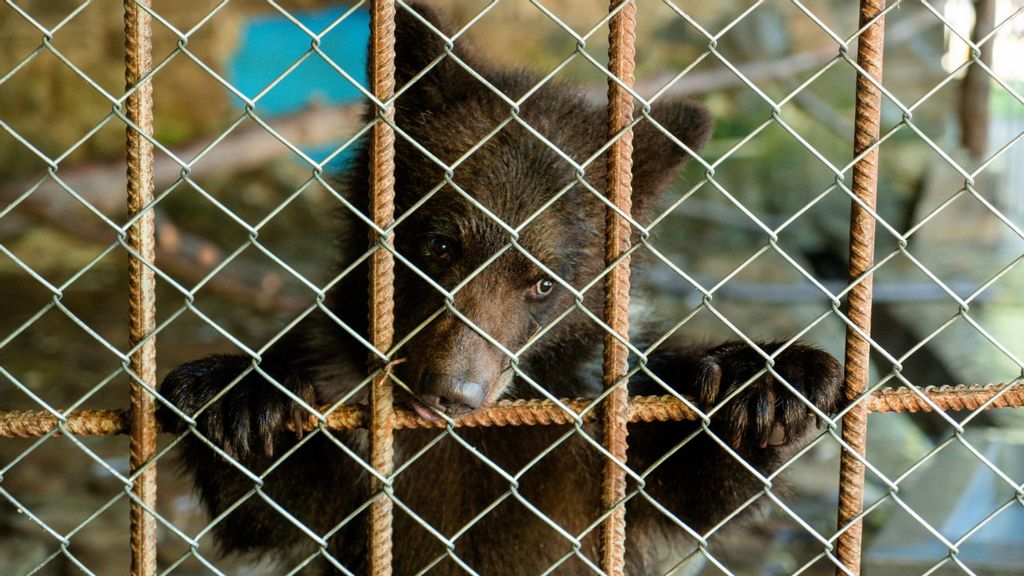 A brown bear family kept in captivity for years in a defunct hotel in Ukraine has been rescued and moved to a sanctuary by activists from  FOUR PAWS International, an animal-welfare organization.

Sirko and Ruta, both 13, and their 5-month-old cub, Andor, were freed from a pen near a shuttered hotel and restaurant in Skole and transferred nearly 80 miles to the Bear Sanctuary Domazhyr near Lviv on June 22.

The adult bears were initially purchased by their former owners and locked in a private mini zoo near the hotel to serve as entertainment for guests and to attract more visitors.

Their cub, born in January, was raised by the owners. It is legal for people to keeping such bears in the country, despite appeals from animal-rights groups for authorities to ban private breeding and keeping bears in cruel conditions.

According to FOUR PAWS, the three bears have spent most of their lives in a concrete enclosure, underfed and unable to participate in their natural behavior.

Veterinarian Marc Golkel, from the Leibniz Institute for Zoo and Wildlife Research in Berlin, Germany, examined the bears on-site.

“Sirko and Ruta have dental problems which will be treated once they have adjusted to their new surroundings. Sirko will then also be neutered,” Golkel told Zenger.

As for Andor: “He seems to be in pretty good health. We plan to microchip, vaccinate and deworm him after his arrival at the bear sanctuary so he can grow up to become a healthy bear.”

Now at the FOUR PAWS Bear Sanctuary, Domazhyr, Sirko and Ruta will be released into a spacious forest enclosure after an adaptation period.

Since Andor was taken away from his mother at a very young age and the two of them failed to form a bond, it would not be safe to reunite them, the welfare organization said.

As a result, Andor will move into a separate enclosure with companions of a similar age for socialization.

Ukrainian laws allow keeping bears in public zoos and sanctuaries, as well as in private captivity if the owners can prove the bears have not been caught in the wild but were purchased or rescued.

However, FOUR PAWS Ukraine director Taras Boiko disagrees with the currents laws and believes that bears need to be given the ability move around, explore and swim in natural surroundings.

“Around 100 bears still live in private captivity in small cages next to restaurants or in private zoos in Ukraine,” Boiko said. “We urge the responsible Ukrainian authorities to ban the private breeding of wild animals and issue licenses only for official sites like sanctuaries with qualified staff and the required resources.

“That would outlaw the keeping and uncontrolled breeding of wild animals by private persons and considerably reduce the number of captive bears suffering in cruel keeping conditions.”