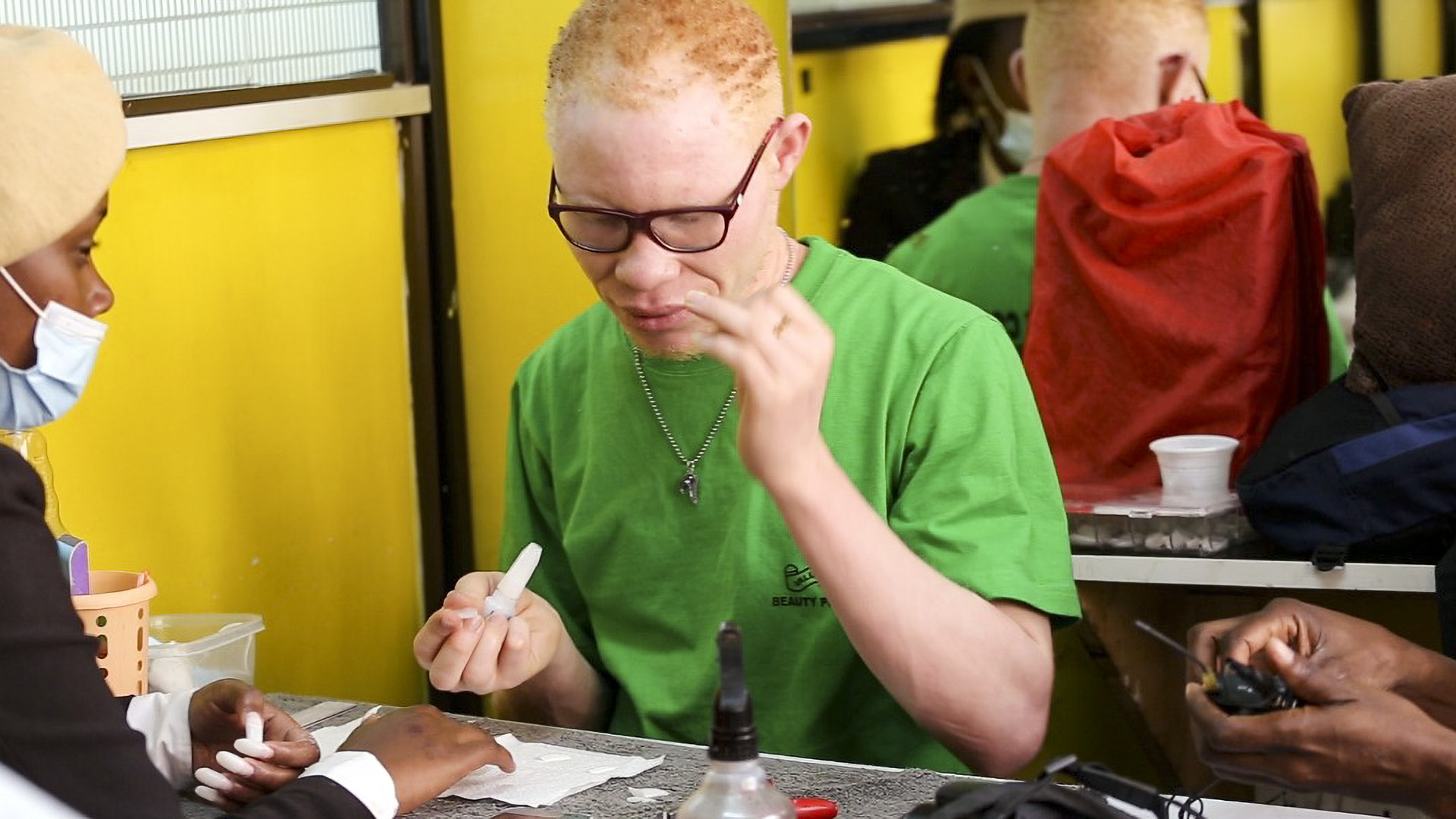 NAIROBI, Kenya — Among the many students at Beauty Point College in Kenya’s capital Nairobi, there is a special cohort: 18 students with albinism, a rare genetic condition limiting the body’s ability to process melanin.

They are part of a larger group, sponsored by beauty products giant L’Oréal in conjunction with the Albinism Association of Kenya to empower them economically. The program started in 2016.

Elvis Makori Ombati, 26, is one of those students who feel that joining this beauty college changed his life. 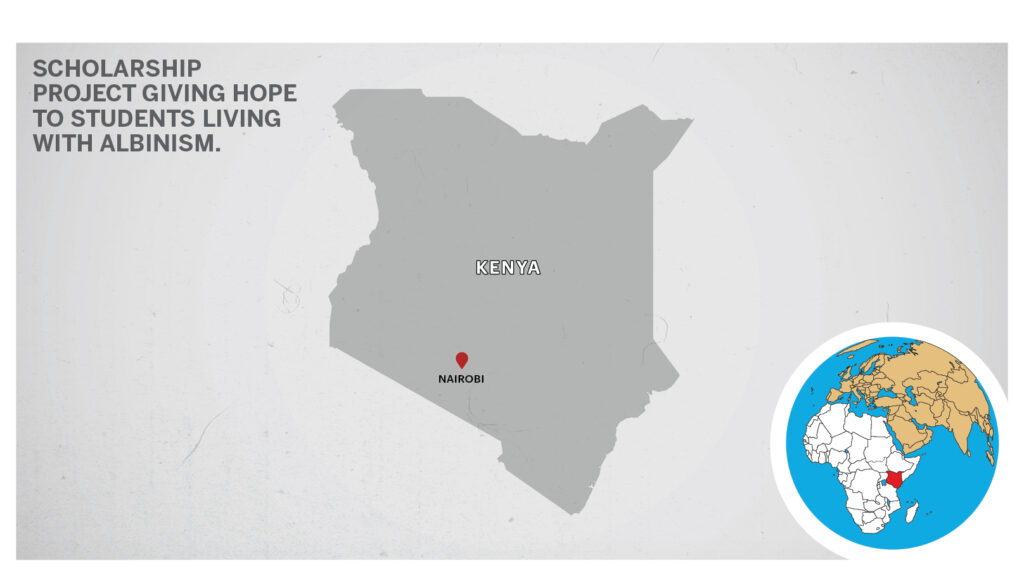 “I no longer feel discriminated against because of my skin color,” said Ombati to Zenger News as he filed the nails of a client.

“Look around the city, when you go to the beauty salons you will find long queues of clients waiting. That tells you the demand is growing, and I want a share of it.”

Ombati, born and raised in Kisii County, around 180 miles southwest of Nairobi, hopes to open a salon and tap into the growing beauty market after graduating from college.

Across the classroom at another table, Rachael Wambui Wangare is practicing how to cut a client’s hair. Although a male-dominated industry, she is determined to transcend boundaries and beat the myths surrounding albinism.

Wangare, a mother of one, used to be a housewife, but now she hopes to assist her family financially after securing a job or opening a business.

“When I joined the college, I didn’t know anything about beauty, but today I am here and doing well beyond anyone’s imagination,” she told Zenger News.

The Human Resource Business Partner for L’Oreal East Africa, Oliver Tambo, said they plan to sponsor at least 20 students annually for three years. A new set of students is expected in August or September 2021.

“The idea is to amplify the conversation around people with albinism, drive inclusion and build economic empowerment,” he told Zenger News.

At the end of the training, the company teaches the beneficiaries entrepreneurial and marketing skills.

“The aim is to engage them through employment, either at L’Oreal or our partners,” Tambo told Zenger News.

According to the 2019 national census, Kenya has about 9,700 people living with albinism, many in rural areas.

“Our plan together with our partners and the Albinism Association of Kenya is to reach many in the villages,” Carol Betty, the project manager at Beauty Point College, told Zenger News.

Although the group of 18 special cohorts was double the current number, some students have not resumed classes after the March 2020 lockdown forced the closure of institutions to curb the spread of Covid-19.

After graduating, the students are offered attachment opportunities to hone their skills in preparation for the job market or self-employment.

“This program aims to encourage other people living with albinism so that they no longer feel lesser or incompetent and that they can come out and unleash their potential through training,” Betty told Zenger News.

People living with albinism in Kenya face many challenges such as stigma, lack of sufficient government funding, and legislation to protect them, said Isaac Mwaura, the chairman of the Albinism Society of Kenya.

“We have made progress, but we have a long way to go,” Mwaura, a Nominated Senator in Kenya’s parliament, told Zenger News.

He said his biological father disowned him at birth, terming him a “pig.”

The initiative, he said, has improved the self-confidence of the target group, which would otherwise be begging for help from society.

“In the past, we also held a Mr and Miss Albinism beauty pageant as a way of building their esteem,” Mwaura said of a 2018 event held in Nairobi.

He said research showed that discrimination of people with albinism stems from the family, with many fathers rejecting their children, leaving mothers with the burden of parenting.

Even in important rites of passage such as marriage, the group faces rejection.

“All this is because of baseless traditional beliefs that albinism is related to curses or bad omens,” Mwaura told Zenger News.

“It is unimaginable that some people in this continent still believe that body parts of albinos can be used to gain riches and treat diseases,” Mwaura told Zenger News.

With a new role as a board member of the Global Albinism Alliance, Mwaura hopes to push for the rights and acceptance of albinos.

“I have proposed an ambassador of people with albinism at the African Union be nominated to represent our issues at the continental level.”

He said his proposal would give momentum to a Regional Action Plan on Albinism mooted by the African Union in 2019, which aims to develop policies for protecting the rights of albinos.

The association has successfully pushed for budgetary allocations in Kenya, enabling people with skin conditions to get special sunscreen lotions for free every month.

“This program has also been replicated in Malawi,” Mwaura told Zenger News.

In the coming months, the Albinism Society of Kenya plans to rope in other partner organizations in Africa to organize a continental beauty pageant for 2021/2022.

“I am also appealing to the government to allocate extra budget to this vulnerable group, especially to cushion them against the Covid-19 pandemic,” said Mwaura.

The Albinism Association of Kenya is also leading a public campaign to change the public perception of its members.

With the current empowerment efforts, Mwaura hopes “Kenya will be a continental model” in advancing the dialogue and practical solutions for people with albinism.

The United Nations sets June 13 every year as the International Albinism Awareness Day, highlighting their achievements and challenges.

This year’s theme was “Strength Beyond All Odds.”