A Half-Century After The War, US Trade With Vietnam Surges

The communist nation is now the sixth largest source of imports to the U.S., behind only China, Canada, Mexico, Japan and Germany.
By Alan J. Krawitz July 2, 2021
Facebook
Twitter
Linkedin
Email 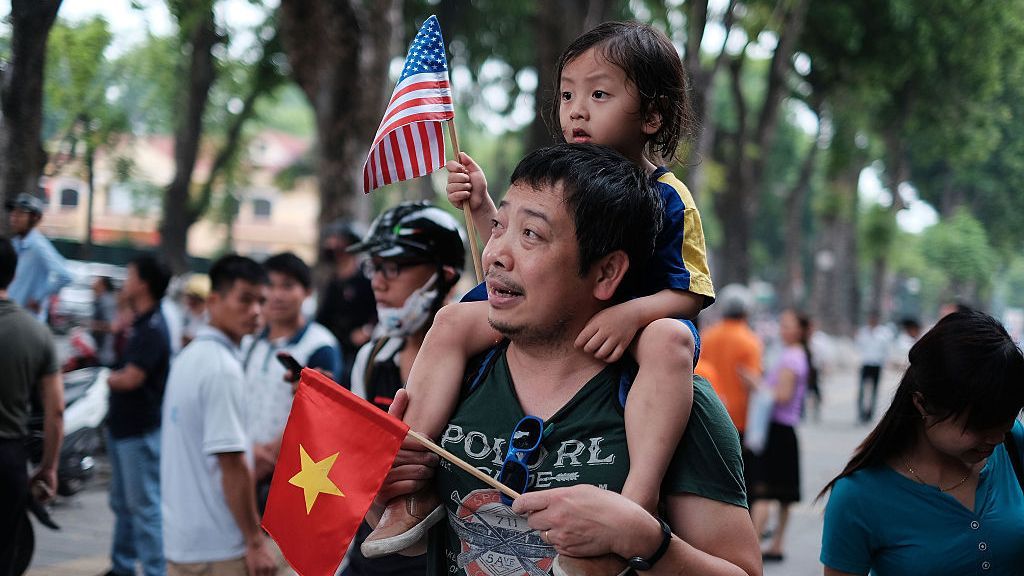 A man carries his daughter near Vietnam's presidential palace in Hanoi as then-President Barack. Obama had a three-day visit to the country in May 2016. (Linh Pham/Getty Images)

Americans are used to seeing a “Made in China” label on goods from sneakers to electronics, with trade between the superpowers growing yearly toward volumes that are now worth around $700 billion annually. But many may have also noticed more and more consumer goods from a source once unlikely: The Socialist Republic of Vietnam.

Vietnam is now America’s sixth largest source for imports — outranked only by China, Mexico, Canada, Japan and Germany, and ahead of other historical trading behemoths like South Korea, Taiwan, India, the UK and France — according to the U.S. Census Bureau.

Trade between the U.S. and Vietnam — population about 100 million — has been growing for years. Vietnam’s Ministry of Industry and Trade predicts total trade with the U.S. will surpass the $100 billion mark this year, up from $90.8 billion last year.

That has turned the onetime foes into important economic partners — and friends.

“Any Vietnamese hostility against the U.S. government or Americans arising from the Vietnam War have long receded,” said Carl Thayer, an emeritus professor at the Australian Defense Force Academy in Canberra and a noted expert on Vietnam, explaining that Vietnam has looked outward as its ties with its northern neighbor have strained.

“Public views of China are toxic, in contrast to strongly positive views of the United States in annual polls,” he said, with the positive views extending to U.S. leaders. “Donald Trump was immensely popular due to his anti-China rhetoric and punitive tariffs.”

Meanwhile, as China has developed and moved up the technological ladder, Vietnamese exporters have increasingly filled the void for American consumers. Many items once typically imported from China now come from the junior revolutionary state.

American imports from Vietnam include footwear, apparel, electrical machinery, furniture and agricultural products, according to the U.S. State Department. But the relationship goes both ways: U.S. exports to Vietnam total $13.4 billion a year, according to Office of the U.S. Trade Representative figures, with the main items heading back across the Pacific to Vietnam including machinery, computers, electronics, aircraft and vehicles.

“Vietnam represents the fastest growing market in Southeast Asia for American exports,” said Thayer, who noted the growing importance of the ties. “The U.S.-Vietnam bilateral relationship will be an enduring part of the post-COVID-19 economic architecture.”

Relations have come a long way since the bitter conflict waged on the Indochinese peninsula from the 1960s to 1970s — known in the U.S. as the Vietnam War, and in Vietnam as the American War — with the shifting geopolitical reality in Asia amid China’s rise having given both countries reasons to ensure bygones remain bygones.

For Vietnam, a big reason is to have a counterweight in the region as its traditional rival gains strength and makes aggressive claims to the South China Sea, international waters east of Vietnam through which more than $5 trillion worth of trade passes each year.

“Vietnam is keen to keep the U.S. engaged militarily in the region, believing that this will continue to contribute to regional peace and stability, not least in the context of China’s rise and growing power,” said Collin Koh, an expert in Southeast Asian naval affairs at the Nanyang Technological University in Singapore.

“In this respect, Vietnam’s view of the offshore stabilizing role played by the U.S. is possibly not different from that of many other regional countries, such as Singapore.”

Repairs to the relationship have also been helped by American veterans of the war, who have sought to avoid political differences in their dealings with Vietnam’s communist regime in order to assist in ongoing efforts to recover the remains of fallen or missing American soldiers.

“Vietnam veterans as a group have done pretty well with the government of Vietnam, as far as going back to visit,” said John Rowan, president of the Vietnam Veterans of America, who was stationed as a soldier at the Danang Air Base in 1967.

Rowan said chapters of his organization have been involved in humanitarian efforts such as helping Vietnamese children for years, while carefully avoiding any diplomatic disputes.

“We’ve always had a good relationship with the Vietnamese government because we don’t get very political,” he said. “We just stick to our agenda of identifying POWs/MIAs and conducting humanitarian missions.”

Improving relations between Vietnam and the U.S. in the wake of the 1970s war can be broken down into four distinct periods, from 1973 to the present, according to Thayer.

The first stage, from 1973-1975, was marked by the peace agreement signed in Paris in 1973 to end hostilities and provide a full accounting of all prisoners of war (POWs) and soldiers missing-in-action (MIAs). President Richard M. Nixon promised about $2 billion in reconstruction aid. However, that fell apart following a 1975 North Vietnamese offensive that led to the collapse of U.S.-backed South Vietnam and ended the war.

The next period, from 1975 to 1995, was marked by limited contact between the newly unified Vietnamese state and Washington, during which “bilateral relations focused almost entirely on a full accounting of POWs and MIAs,” on both sides, Thayer said.

In 1978, President Jimmy Carter came close to normalizing relations but was stopped by Congress. Vietnam shortly after signed a 25-year alliance with the Soviet Union. After Vietnamese forces overthrew the Khmer Rouge and occupied Cambodia that year, the U.S. subjected Vietnam to economic sanctions until it withdrew from its neighbor in 1989.

A U.S. trade embargo on Vietnam was finally lifted in 1994, and relations between the two countries became more harmonious, with Defense Secretary William Cohen in 2000 becoming the first U.S. official to visit the country since the end of the war. A bilateral trade agreement was signed in 2001, with President Bill Clinton visiting Vietnam.

President Barack Obama visited Vietnam and lifted an embargo on trading arms with the former foe in 2016, and Prime Minister Nguyen Tan Dung became the first Southeast Asian leader to be received by President Donald J. Trump at the White House in May 2017.

When Obama visited in May 2016, he acknowledged the rapidly changed relationship.

“As Vietnam has transformed, so has the relationship between our two nations,” Obama said, noting that the reconciliation had required compromise. “We learned a lesson taught by the venerable Thich Nhat Hanh, who said, ‘In true dialogue, both sides are willing to change.’”

But he also spoke of a long history of trade between the two nations.

“Today, we also remember the longer history between Vietnamese and Americans that is too often overlooked,” Obama said. “More than 200 years ago, when our Founding Father, Thomas Jefferson, sought rice for his farm, he looked to the rice of Vietnam, which he said had ‘the reputation of being whitest to the eye, best flavored to the taste, and most productive.’”

For the past decade, though, relations have been marked most by security cooperation. Most analysts have viewed those warming relations through the lens of the shared rival.

While China would not be thrilled with Vietnam’s closer trade links with the U.S., Thayer noted, Beijing would ultimately be “more concerned about defense, security and political relations between Hanoi and Washington than about economic relations.”

China’s government accordingly continually reminds Vietnam of their shared commitment to socialism and opposition to foreign interference in their internal affairs, he said.

“China is wary of any growth in U.S.-Vietnam defense-security cooperation, but this concern is mitigated by Vietnam’s long-standing defense policy which states that Vietnam consistently advocates neither joining any military alliances, siding with one country against another, giving any other country’ permission to set up military bases,” Thayer said.

Moreover, in terms of trade, many raw materials that go into Vietnam’s exports ultimately come from China: “It provides the resources that fuel Vietnamese manufacturing and exports. It is in China’s material interest to see Vietnam prosper economically.”

Relations between the U.S. and Vietnam also have their own problems.

Last year the U.S. designated Vietnam a “currency manipulator,” accusing it of changing the value of its currency to help gain unfair trade advantages — but no action was taken.

There is also Vietnam’s human rights record and suppression of pro-democracy activists and its continued dependence on Russian arms and military technology, which has led to U.S. threats of renewed sanctions. There are also problems including threats of U.S. tariffs on Vietnamese seafood, steel and aluminum, amid claims they are sourced from China.

Yet, in fundamental terms, the relationship has come a long way since 1975.