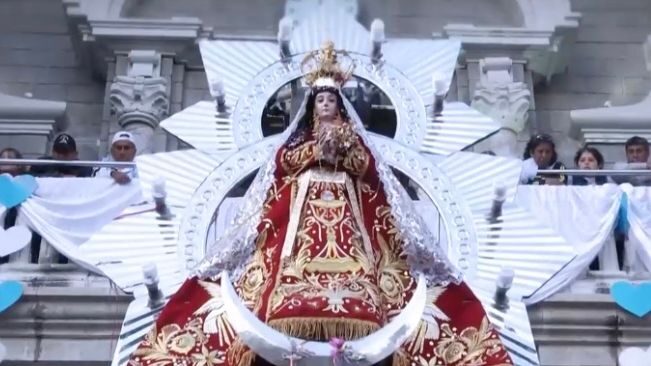 The Virgin of La Puerta is highly revered throughout northwestern Peru and travels through various towns for seven days in May. (Government of Peru)

The Virgin of La Puerta’s festival is a religious celebration of great relevance in Latin America. The heart of the celebration is the town of Otuzco, in northwestern Peru.

Pope Pius XII gave the Virgin of La Puerta the “Queen of Universal Peace” title in 1942.

Otuzco’s locals organize a festival twice a year — in December and May — in her honor.

The December festival spans four days, beginning on December 12, when believers go to church and pray.

During the festival, parishioners celebrate the Virgin of La Puerta and thank her for the previous year’s blessings with music, food and colorful decorations.

The story behind the tribute dates back to colonial times. Spanish Catholics arrived in the area in 1554. Six years later, they founded Otuzco and the church of the Immaculate Conception of the Virgin of Copacabana in this town.

Pirates attacked several coastal cities in Peru during the 17th century. People in Otuzco feared they would enter Trujillo and reach their town. So they placed an image of the Virgin at the entrance of Otuzco for her to protect it. Legend has it that the pirates were close but did not ravage Otuzco, which is why the locals consider the Virgin’s intervention miraculous.

The locals say that since the Virgin leaves town, accompanied by a figure standing by the church’s door, it was customary to call her the Virgin of La Puerta (“puerta” means door in Spanish).

On the festival’s Facebook profile, the parishioners often call the Virgin of La Puerta by an affectionate nickname: “Little Mother.”

For the Virgin’s festival in December, people make a pilgrimage from Trujillo to her church in Otuzco. Devotees walk nearly 45 miles as a way of honoring the Virgin with their bodies and souls.

In an unsafe Latin America, parishioners look for ways to make the trip safely.

“On December 12, I will make a trip from Trujillo to Otuzco to fulfill a promise that I made to our mother, and I would like to see if there are people like me who will walk to Otuzco, to be safer. I will walk back and forth,” a devotee posting with the official profile of the festival said on Facebook.

Some walk the last few miles on their knees while praying for a miracle. This penance is a way of paying for their sins. When they arrive at the sanctuary of Otuzco’s patron saint, devotees try to touch the Virgin’s mantle seeking to be blessed by its contact.

The festival’s organizers hold different activities for all those who wish to celebrate the Virgin.

On December 14, devotees raise an altar and decorate it with colorful ornaments, candles and flowers. Some carry the Virgin’s image down a ramp among the faithful. At night, there is a party with different musical groups and fireworks.

The next day, the feast continues with parades and more fireworks. The local parish priest celebrates masses throughout the day.

On December 16, parishioners return the image to the church’s altar.

In May, the image tours for seven days through the most important Catholic temples in Peru, including Trujillo’s cathedral, as well as hospitals, prisons, universities and parishes. At the end of the seven days, she returns to her town and waits until December to celebrate anew.

«Previous Post
Second Doses Of Sputnik V Vaccine, Delayed In Latin America»Next Post
Far From Home: The Life Of Students During The Pandemic