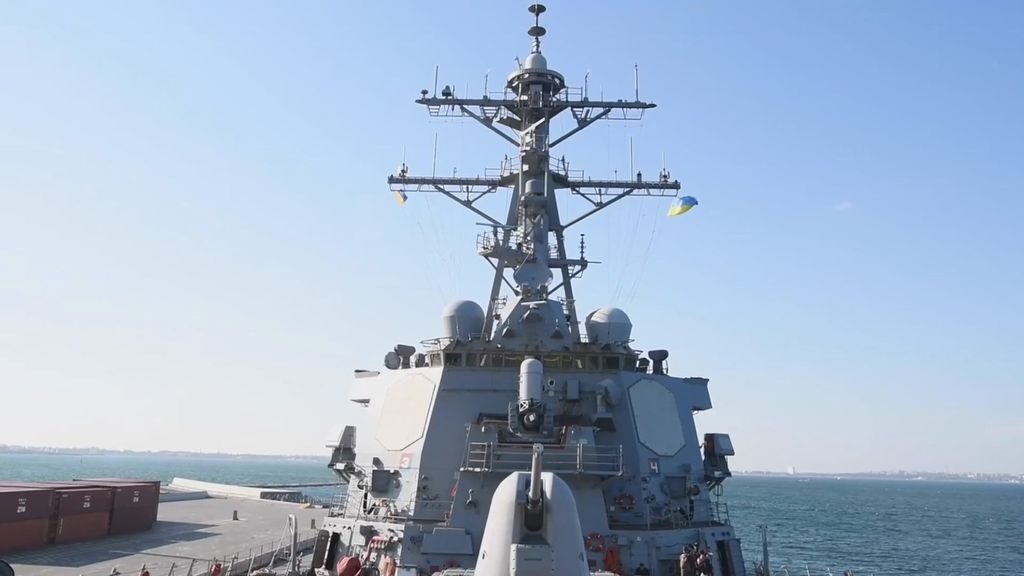 A U.S. Navy guided-missile destroyer arrived in Odessa, Ukraine, to take part in a military exercise amid conflict with neighboring Russia.

Footage shows the USS Ross, an Arleigh Burke-class guided-missile destroyer, as it arrives off the coast of the Black Sea port city of Odessa on June 27.

The U.S. Navy ship arrived in the region to participate in Exercise Sea Breeze, a military exercise with 30 other NATO allies and partners including the United Kingdom.

The maritime exercise has been co-hosted by the United States Sixth Fleet and the Ukrainian Navy 21 times since 1997.

This year’s edition is dedicated to promoting Western cooperation, strengthening maritime security and peace in the region, and bringing Ukraine up to NATO standards.

The drill comes amid the ongoing Russo-Ukrainian War, which began in 2014 and has seen Ukraine lose territory to pro-Russia rebels.

Odessa is located only around 110 miles from the Crimean Peninsula, which was annexed by Ukraine’s larger neighbor in the first year of the conflict. Since then, NATO has increased its presence in the Black Sea, refusing to recognize the Russian occupation.

The atmosphere around the exercise has been tense, with Russian forces firing warning shots at the British warship HMS Defender as it sailed from Odessa to Georgia just days earlier.

U.S. Navy leaders participating in the exercise expressed confidence during a press conference on Tuesday that Russia would respect the procedures and standards for countries operating in international waters.

“That’s an important part of what we’re doing here with Sea Breeze, is we are demonstrating to the world that the Black Sea is an international sea,” said U.S Navy Captain Kyle Gantt at the press conference. “It is open and available for the free transport of commerce, of shipping, for all nations, and it is not owned by any one nation.”

In addition to the training activities taking place during the exercise, divers from the U.S., Ukraine, Canada, Poland and Georgia will be clearing wreckage from a Soviet-era yacht that sank in 2016 and is blocking part of the naval pier at Odessa.

The yacht was previously part of the Soviet Union’s ministry of interior, but fell into neglect as it sat unattended before eventually sinking. The removal will continue beyond the end of the Sea Breeze Exercise, and authorities expect to have it cleared by August 1.

The USS Ross was launched in 1996 and its home port is Naval Station Rota in the southwestern Spanish municipality of the same name.

This year’s exercise has the largest number yet of participating nations with 32 countries. In total, 32 ships, 40 aircraft and helicopters and over 5,000 military personnel are taking part in the exercise, which will end on July 10.