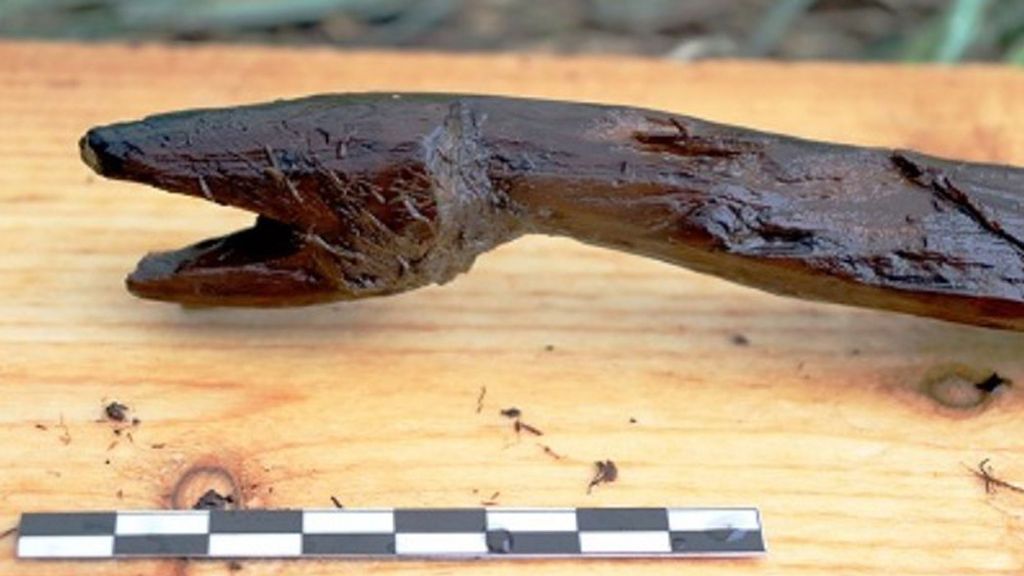 In cooperation with the Finnish Heritage Agency, researchers from the University of Turku and the University of Helsinki unearthed the wooden staff at the Jarvensuo 1 archeological site on the shores of Rautajarvi Lake in southwestern Finland.

The site was accidentally discovered by ditch diggers in the 1950s, and the first find was a wooden paddle dated back to the Neolithic period. In the 1980s, scientists discovered several more well-preserved artifacts — including pottery, fishing implements and a wooden ladle with a handle carved into the shape of a bear’s head.

Excavations at the site have been ongoing since then, but most of the work remains unfinished.

New research recently began at the site after 35 years, which revealed the serpent staff. The object is almost two feet long and was carved from a single piece of wood. According to experts, the staff was either lost or purposely discarded amid the lakeshore vegetation.

Archeologists said the discovery of the staff is unlike other wooden items from Neolithic Northern Europe, despite the ancient Pit-Comb Ware Culture depicting snakes in cave carvings. Motifs of humans, elk and waterfowl are more typical in comparison.

Though the significance of the staff is uncertain, researchers say it may have been used by a shaman for rituals during the Stone Age. Snakes have symbolic meaning to the area’s cosmology, and at the time many believed shamans could transform into snakes.

“There seems to be a certain connection between snakes and people,” said Antti Lahelma, an archeology docent at the University of Helsinki whose research covers prehistoric rock art.

“This brings to mind northern shamanism of the historical period, where snakes had a special role as spirit-helper animals of the shaman,” he said.

Scientists found other wooden artifacts besides the serpent staff, such as cooking utensils, fishing equipment and structural remains. The research also revealed evidence of sedimentation and human activity.

“Well-preserved finds from the wetlands help our understanding of ancient peoples and the landscape where they performed both mundane and sacred activities,” said Satu Koivisto, a researcher at the Jarvensuo site.

He said drainage works and changing environmental conditions heightened by climate change are placing the ancient site at risk.

“The signs of destruction caused by extensive drainage are already clearly evident at the site, and its organic treasures are no longer safe,” Koivisto said.

«Previous Post
Nein Camp: Hitler’s Favorite Beauty Spot Closed After Visitors Trash It With Garbage »Next Post
Furor-i: Judge Rejects Ferrari’s Bid To Scrap Replica Daytona As It’s So Bad No One Could Be Fooled