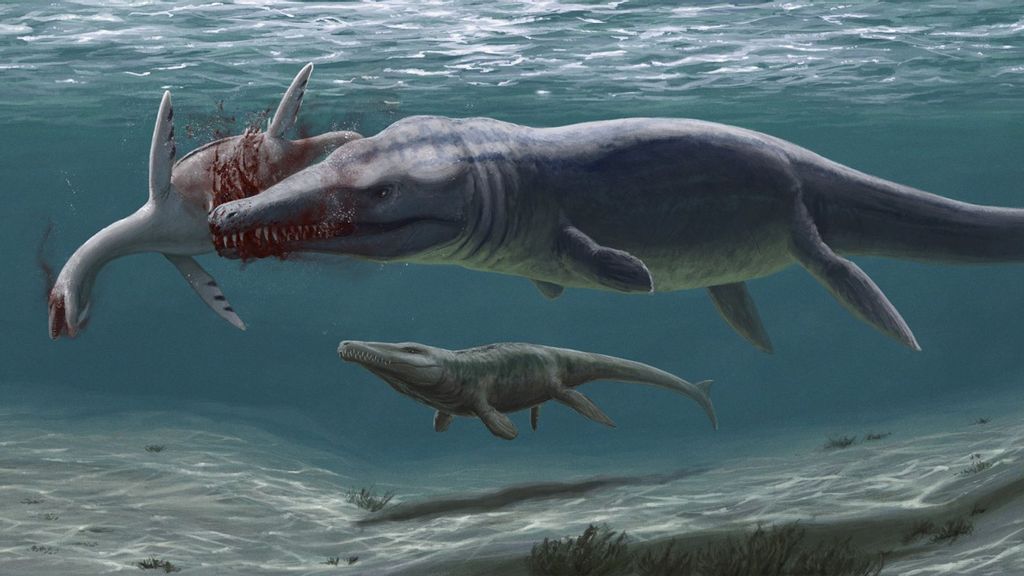 An illustrative image by the Vienna Natural History Museum showing a large relative of the crocodiles (Plesiosuchina) that attacks a smaller plesiosaur, with a Torvoneustes in the background. (Edyta Felcyn, Daniel Madzia/Zenger News)

Experts from multiple European institutions have proven that fossilized teeth dating back 138 million years are from a previously unknown species of extinct sea crocodiles.

The teeth were found in a quarry near the Czech town of Stramberk in 1912. Since then, they have been kept at the Natural History Museum in Vienna — but without any detailed information about what species they came from or when it lived.

But a study now concludes that the creatures they sought to identify had never been encountered before in recorded history.

Researchers spotted the specimens in June 2020 and gained permission to borrow them for a close examination, including chemical analysis and examination under a high-powered microscope.

By mid-August the team representing the Institute of Paleobiology at the Polish Academy of Sciences and the School of GeoSciences at the University of Edinburgh in Scotland finished their work, with help from the Viennese museum’s experts. Their findings were published on May 20.

The teeth come from members of the extinct marine crocodile family Metriorhynchidae, which dates back around 138 million years to the Early Cretaceous period.

Alexander Lukeneder, a paleontologist at the Natural History Museum Vienna, worked with other experts throughout Europe to investigate the fossils.

Metriorhynchid crocodiles belong to the archosaur group, which also includes dinosaurs, pterosaurs, birds and sea crocodiles, which were the best adapted to marine waters.

The animals inhabited shallow marine ecosystems in North and South America and the chain of Meditteranean islands that would later become the European continent. Scientists estimate they would have been around 23 feet long.

The species are believed to be the youngest representatives, geologically speaking, of metriorhynchid crocodiles. They disappeared during the Cretaceous period, long before the extinction of the dinosaurs.

Analysis of enamel on the teeth showed that the two crowns each belonged to a different animal genus, called Plesiosuchus and Torvoneustes.

While Plesiosuchus hunted pliosaurs and other marine reptiles, Torvoneustes fed on fish and ammonites, the ancestors of the modern nautilus. According to research by Mark T. Young, a contributor to the new study, Plesiosuchus had a robust skull and a strong bite, making it an apex predator. Torvoneustes were over 15 feet in length. Plesiosuchus measured longer than 22 feet.

The team that made the discovery came from multiple European universities and museums, including the Natural History Museum in Bielefeld, the Polish Academy of Sciences, the Institute for Geological Engineering in the Czech Republic and the School of GeoSciences at the University of Edinburgh.

The study was published in the open-access scientific journal Acta Palaeontologica Polonica, published by the Institute of Paleobiology of the Polish Academy of Sciences.

The findings show the power of historic collections for modern discoveries, the authors write. Scientists, they concluded, can reveal “new secrets” from collections, even after decades of modern methodology and insight from specialists.

«Previous Post
Shore You Meant To Do That? Riding Fan’s Horse Takes Her Into The Sea For A Swim »Next Post
A Doctor’s Prescription For Premium Peanut Butter