Biden wanted 70% of adults to have one dose by Independence Day but nationwide take-up is 66.2%
By Carlin Becker July 1, 2021
Facebook
Twitter
Linkedin
Email 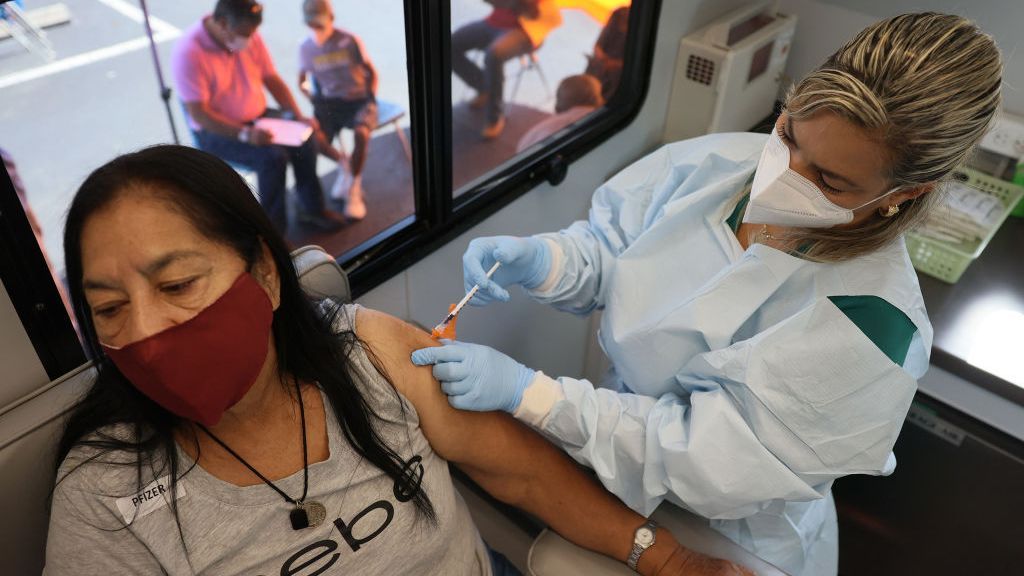 A woman receives a Pfizer vaccine at a clinic in Miami, Florida, on May 17. (Joe Raedle/Getty Images)

The White House is expected to fall short of its goal for 70 percent of U.S. adults to have received at least one coronavirus vaccine jab by July 4, but should not consider it a major failure, experts told Zenger on Thursday.

President Joseph R. Biden Jr. acknowledged last week that his administration will likely fall short of the threshold it set for vaccinations by the July 4 deadline.

But with the Centers for Disease Control and Prevention reporting that 57.2 percent of Americans over 18 are fully vaccinated and 66.2 percent have received at least one dose, some experts told Zenger the effort to administer vaccines has still been a success.

The gap between Biden’s target and the number of adults who have had one dose is 8.5 million, but there are extreme geographical variations in the levels of vaccination.

The states that lag the most are Mississippi (where 36 percent has had one dose and 30 percent are fully vaccinated), Louisiana (38 percent with one and 35 percent fully), Idaho (39 and 36 percent), Wyoming (39 and 34 percent) and Alabama (40 and 33 percent), according to USAFacts, a “not-for-profit, nonpartisan civic initiative” that compiles public U.S. government data.

That led to a warning from Dr. Anthony Fauci, director of the National Institute of Allergy and Infectious Diseases, that the U.S. risked a resurgence of the virus in areas with low take-up as the more infectious Delta variant spread rapidly.

“There is a danger, a real danger, that if there is a persistence of a recalcitrance to getting vaccinated that you could see localized surges,” he said at a White House press briefing late last month.

“When you have such a low level of vaccination superimposed upon variant that has a high degree of efficiency of spread, what you are going to see among under-vaccinated regions, be that states, cities or counties, you’re going to see these individual types of blips,” Fauci later added in a televised interview. “It’s almost like it’s going to be two Americas.”

But conservative-leaning think tanks said that the success of vaccinating older people meant that the most at-risk populations had been protected and the White House should consider that measure the most important benchmark of success.

“The reason they’re not reaching [70 percent] is because there are not a lot of people left to vaccinate, and that gets to the issue that a percentage of the general population is really not the appropriate metric here,” said Ed Haislmaier, a senior research fellow and healthcare policy expert at the Heritage Foundation.

Haislmaier said it’s clear “vaccines have been widely available” in the U.S. so the inability to reach the 70-percent threshold was not a severe policy failure.

“There is sufficient supply in the system,” he said. “If all the people who haven’t been vaccinated suddenly wanted to get vaccinated, there’s the supply there to do it.”

“The more appropriate metrics are to look at the population subsets that are most at-risk and say, ‘How well have we done there?’ And when you do that — that’s particularly the elderly — the numbers are quite high,” Haislmaier added. “In terms of reaching the population most at risk … we pretty much have done that.”

Among those who have yet to receive a jab are those who have been infected and recovered — who, in some areas, were not prioritized for a shot because they had natural antibodies — as well as those who remain hesitant about vaccine safety.

“They’ve kind of made up their minds and are willing to take their chances.”

The refusal of so many Americans to get vaccinated, coupled with the fact that many had already contracted COVID-19 and recovered, made Biden’s hopes for 70% of adults by July 4 somewhat of an “unrealistic goal,” Singer said.

The CDC strongly advises people who have had COVID-19 to receive the vaccine.

While evidence has shown that recovered coronavirus patients do develop natural antibodies, research has not determined how long they last or how effective they are at combating the virus, and particularly newer more severe strains, such as the Delta variant.

There have been cases of reinfection, and it is not known if the recovered are “definitively immune to SARS-CoV-2 reinfection because biologic markers of immunity have not been correlated with protection from infection,” the CDC says.

However, the department has noted that most recovered adults had some immunity for at least 90 days after diagnosis. In a study funded by the National Institutes of Health, researchers found that 95 percent of the 200 recovered participants still had durable immune “memories” of the virus as long as eight months after infection.

Scientists and officials have also sounded the alarm over the emerging Delta variant.

Having spread to almost every state, CDC Director Rochelle Walensky indicated last month that the Delta variant was expected to soon be the dominant strain in the U.S. In a recent White House briefing, National Institute of Allergy and Infectious Diseases director Anthony Fauci also warned that the Delta variant was already considered to be “the greatest threat in the U.S. to our attempt to eliminate COVID-19.”

Currently considered only a “variant of concern,” it has shown evidence of increased transmissibility, more severe disease when contracted and appears to have the ability to reduce of impact of antibodies created by previous infection or vaccination.

However, mutations of the virus have so far had a “negligible effect,” Haislmaier argued, pointing to a study showing that receiving both doses of the Pfizer vaccine is 88 percent effective against the Delta strain and an announcement from Moderna that its two-dose vaccine also has a neutralizing effect against the variant.

“The current vaccines seem to be roughly as effective against that strain as they were against the original strain, particularly the Moderna and Pfizer vaccines,” he said, adding its higher transmissibility was still a big issue for the unvaccinated.

Singer said that Delta’s higher transmissibility may now be “an incentive for the people who are still holding out on getting vaccinated.”

“We’re approaching herd immunity,” Singer said. “That doesn’t mean eradication of the virus. It means there are enough blockages for the pathways for the virus to take so that you’re not going to see major outbreaks that are disruptive to everyday life.”

“In the parts of the country where people have not gotten vaccinated, you’re going to see more cases,” he explained. “But if you’ve gotten vaccinated … I don’t think you need to worry about this variant more than any of the other variants.”

There is also the question of the rest of the world, Singer noted.

He argued that rather than continuing to push the vaccine amid a plateauing vaccination rate at home, the Biden administration may want to focus more on its efforts to distribute doses to other countries in need, including nearby countries in Latin America.

In early June, the White House unveiled its plan to share 80 million U.S. vaccine doses worldwide by the end of the month — with the first 25 million going to countries in South and Central America, Asia and Africa, before ramping the program up further.

“At this point, we’re hitting a point of diminishing returns by pushing vaccination on the American public,” Singer said. “They got it, and those who are refusing to get vaccinated are unlikely to change their mind. So let’s get this vaccine out to the people in the rest of the world who really want it and don’t have access to it.”