Animal rescuers found she'd been taken from her mother and locked in a bird cage because she's so small.
By Tijana Milikj June 30, 2021
Facebook
Twitter
Linkedin
Email 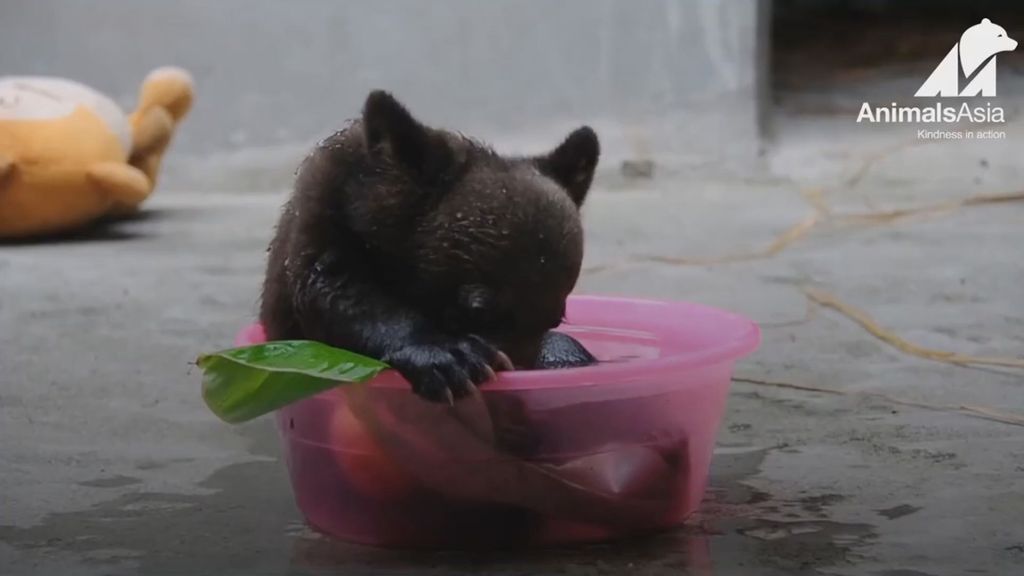 Smudge, the cute moon bear, was the last animal to be born at a bile farm in China.

Nanning Bile Farm bred bears for many years and extracted their bile for traditional Asian medicines.

The bears were kept in poor conditions, with many kept in cramped cages from birth, according to the animal-rights group Animals Asia, and farmed for their bile — the digestive fluid produced by the liver.

At its height, the farm held 132 moon bears, also known as Asian Black Bears who would routinely undergo the process of bile extraction.

Smudge was the last bear born at the farm while it was still in operation. Separated from her mother, she was put in a birdcage because the spaces in a regular-sized bear cage were too big to hold her tiny frame.

When the farm closed, Animals Asia took over the premises and started caring for the animals there. At that time, Smudge was only four months old.

Upon arrival at the farm, they located Smudge in a dark cell at the back of the courtyard, crying for her mother.

“We could hear crying coming from the yard we were standing outside. I insisted that the worker open the door to the yard,” said Heidi Quine, veterinary team director at Animals Asia’s Vietnam sanctuary, then senior bear manager at Nanning.

“We found Smudge alone, whimpering and shaking. Against better judgment, I rushed in, scooped her up, and held her against my chest. She was so helpless and so desperate for her mother she immediately calmed down,” she said.

The team noticed the cub had untreated wounds on her nose which came from rubbing against the bars of the cage.

Smudge was taken to a courtyard where she had a paddling pool, climbing frame and toys to stimulate her growth.

She was showered with love and attention from every member of the sanctuary team, who often gave her tasty snacks.

Smudge received a designated bear team manager named Rocky, who played the role of her mother and taught her to climb on a structure specifically made for her.

She also had a den-mate named Wai Kee. They spent their time playing, splashing around in the pool, and enjoying cool hose showers together.

Smudge and Wai Kee even had a greeting move — they would gently pat each other on the head as they passed by.

In April 2021, it was decided that Smudge and other bears from the old bile farm would be moved to a new bear sanctuary in Chengdu, China.

Smudge and her best friend Wai Kee are now at the new Chinese shelter after a 750-mile journey from Nanning to Chengdu. They are still in quarantine, waiting to settle into their new home.

“Smudge is doing really well. She’s been relaxed and is enjoying all the enrichment items and tasty treats we’re giving her. Just tonight, I was feeding her peanut butter from a spoon which she loved,” said Molly Feldman, senior bear team manager.

Over 20,000 bears — mainly moon bears but also sun bears and brown bears — are held in captivity on farms in Asia to have bile extracted from their gallbladders. The fluid contains high levels of ursodeoxycholic acid, also known as ursodiol, which is helpful in dissolving gallstones and treating liver disease.

There are over 30 readily available, herbal alternatives to bear bile, and numerous synthetic alternatives, the Asian NGO says.

Animals Asia also works to end the trade of dogs and cats for food in Asia.