Popcorn With Zenger: Liam Neeson Drives Down A Satisfying Slippery Slope In ‘The Ice Road’ 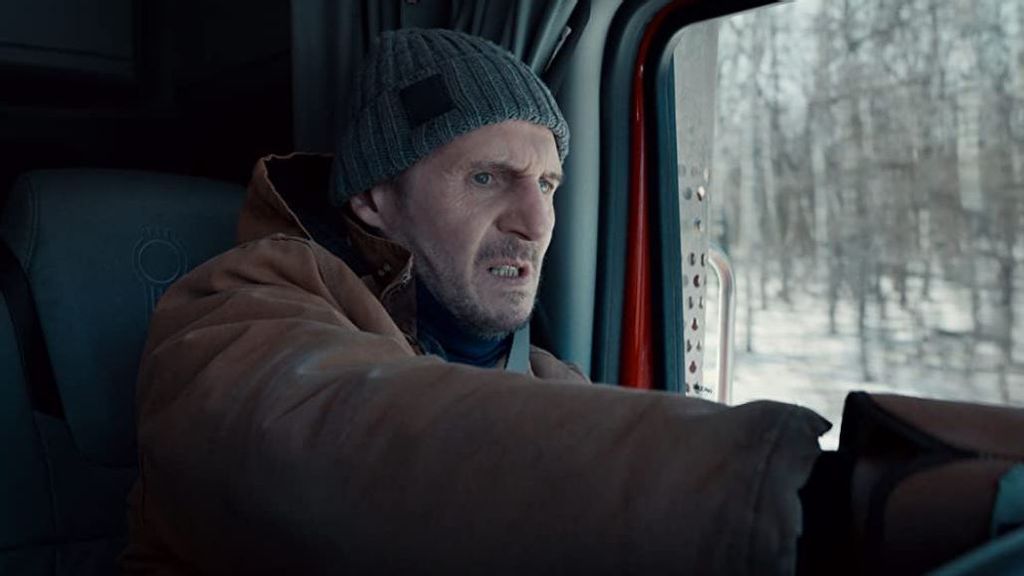 Liam Neeson plays a truck driver in a desperate race against time in “The Ice Road.” (Courtesy of Netflix)

Finding quality films on Netflix is much like trying to rescue a group of miners from cave collapse — it takes days to find and there’s no guarantee of success. In this case, there are survivors in the rubble.

Old age may have made the 69-year-old Liam Neeson a less-believable action star in 2021, but that has not slowed his output — he’s typically in nearly three or four new films every year.

Earlier this year, Neeson appeared in “The Marksman,” a film about an old gunslinger outrunning drug cartels that was released before most movie theaters in the country had fully reopened. This time around, he is giving up life behind a gun for life behind the wheel of a semi-truck. Bypassing the big screen altogether and making the move to Netflix is his second film of 2021, this one titled “The Ice Road.”

The Story: The story begins at an underground mine in Manitoba, Canada. A methane explosion has trapped 26 miners who are running out of air to breathe. Mike McCann (Liam Neeson) and his brother Gurty (Marcus Thomas) receive an alert for ice road truckers needed in Winnipeg.

Jim Goldenrod (Laurence Fishburne), another ice road trucker, agrees to lead a dangerous rescue mission in order to help deliver three wellheads to the mine. The only way for them to make it to the miners is to drive across miles of frozen water that could break under the weight of the truck at any moment.

About halfway into their journey, the drivers begin to notice that their trucks have been sabotaged, and as it turns out, the mining company has been misleading both the truckers and the miners about the circumstances of the collapse. As a result, both groups are in a race against time to save each other before their deaths are mislabeled accidents for financial gain.

Bright Spots: Neeson has become the new King of B movies and “The Ice Road” is one of his better films in the last few years. The premise is just interesting enough to draw audiences into a film that looks like “Mad Max” on ice, and not in the Disney way. The film keeps its audience strapped in with a suspenseful story as it mixes up multiple themes to keep their interest, much like crash television in the ’90s.

The film is well shot and chooses the beautiful location of rural Winnipeg as its canvas. Cinematographer Tom Stern is a massive positive for the film, as he gets the most from his exterior and interior locations. Stern’s work in “The Ice Road” is another stellar addition to his resume.

The movie also has some solid action set pieces with a couple of stunts fit for a big-budget film. With a good cast of characters “The Ice Road” presents a lot of good entertainment — but it does have its faults.

Weak Spots: While “The Ice Road” has many positives, it is anything but a smooth ride to the finish. Director Jonathan Hensleigh certainly has a formidable resume as a writer, with credits such as “Jumanji,” “Con Air” and “Die Hard with a Vengeance.” But he hasn’t directed many full-length flicks in the past decade or so, which helps explain why the film feels unpolished.

In addition, the movie’s narrative is very confusing, with themes of thriller, natural disaster and melodrama mixed into the pot. “The Ice Road” suffers from too many subplots, ranging from Mike’s PTSD-affected brother who is used as an emotional crutch, to family members trapped at the mine, and despite 100 minutes of setup, fails to deliver a satisfying conclusion. The bloated plot doesn’t help to improve the chemistry issues that are a direct result of the plot never giving time for anything to develop.

The Takeaway: If you are looking for the best film this weekend involving fast drivers, “Fast & Furious 9” doesn’t really cut the mustard. You’ll be much happier with the alternative that “The Ice Road” offers for your time and money.

See or Skip: “The Ice Road” is one of the better Netflix films to come out in 2021. While it is not a perfect narrative film, it meets the standards of a satisfying thriller for those looking for streaming content.