In Guatemala, Attacks On Activists And Criminalization Of Dissent Drive Migration To US

After a recent visit by Vice President Kamala Harris, rights groups say they fear the US is overlooking a key driver of migration. 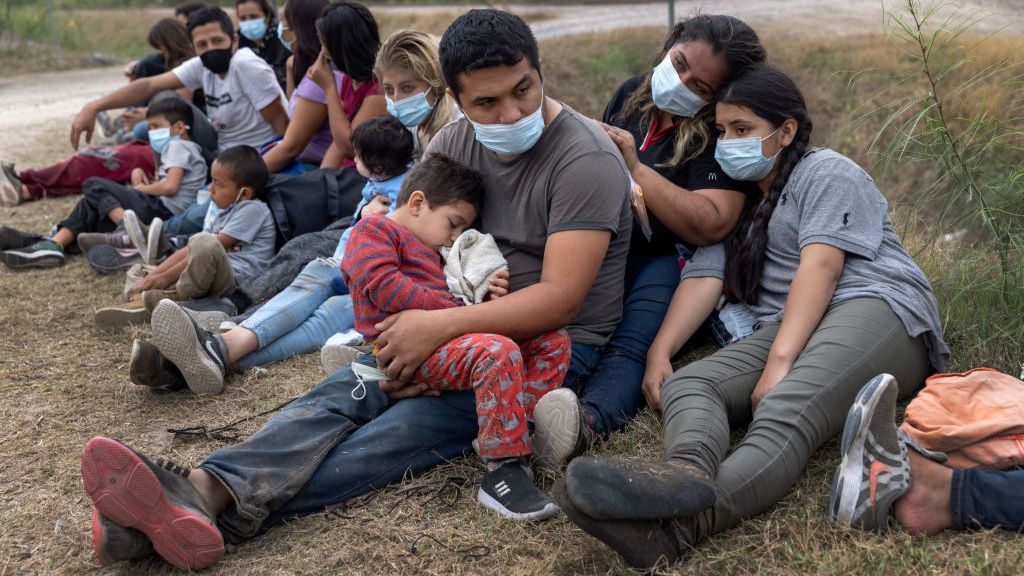 A Guatemalan family waits with fellow immigrants to board a U.S. Customs and Border Protection bus to a processing center after crossing the border from Mexico in La Joya, Texas, on April 13. A surge of immigrants, including record numbers of children, are making the arduous journey from Central America to the U.S., challenging immigration authorities. (John Moore/Getty Images)

Attacks on human rights activists in Guatemala are at a 20-year high, with a bloody tide of 15 murders and over 1,000 assaults in 2020 alone, according to watchdog group Unit for the Protection of Human Rights Defenders in Guatemala (Udefegua).

The group also reported over 300 cases of “criminalization” — spurious legal charges brought against activists by government authorities. Various Guatemalan human rights groups consider this repression a key driver of migration that the U.S. has yet to denounce firmly enough.

Most of the migrants arriving at the U.S. southern border are from Central America’s northern triangle countries of Guatemala, Honduras and El Salvador, with Guatemalans predominating. They are fleeing poverty, hunger and violence facilitated by widespread corruption.

Now, Guatemalan rights groups say many of the people and organizations trying to improve these conditions are under grave threat.

U.S. Vice President Kamala D. Harris visited Guatemala in early June to spearhead efforts to tackle the root causes of migration from Central America. The U.S. announced it will create a new anti-corruption task force to train Guatemalan investigators and will continue work on a planned regional aid package of $4 billion.

Harris said she had “very frank” talks with Guatemalan President Alejandro Giammattei, who himself has been accused of abetting corruption. In an open letter to Harris, Guatemala’s Human Rights Ombudsman’s Office said Giammattei has presided over “a climate of repression” against activists, journalists, and independent judges and prosecutors that has worsened corruption.

“Guatemala is suffering an accelerated regression in human rights,” the letter stated, and that if this is not addressed, “it is impossible to hope for real progress in the fight against corruption and remove the root causes of irregular migration.”

Jordán Rodas, the country’s human rights ombudsman who signed the letter, said Harris’ visit was important, “but even more important is what happens after.”

He said there was a direct relationship between migration and repression and that to stem migration north, “[U.S. officials] need to put more emphasis on human rights.”

Rodas added that during his five-year term as human rights ombudsman, he has received numerous death threats.

“I’ve gotten used to living with it … but you can’t let it paralyze you,” he said.

He also said he has been repeatedly harassed by authorities and that the Public Ministry has attempted to open 16 cases against him on a range of spurious charges, 15 of which have already been rejected by the courts. And due to budget cuts approved by Guatemala’s Congress, his office has been forced to cut staff from 11 advisers to four over the last two years.

Udefegua echoed Rodas’ warning in its own open letter to Harris: “If the people who promote equality, democracy and peace are punished for their work with violence, harassment, incarceration and even murder, irregular migration will not stop.”

Claudia Samayoa, Udefegua’s president, was part of a group of civil society leaders who met with Harris in June. Samayoa told Zenger News the visit was “very positive” and that, even though it has not yet materialized, she hopes for “a discourse [from the U.S.] centered on human rights to combat this regression.”

Jorge Santos, Udefegua’s executive director, said that without a renewed focus on human rights, “without a doubt, the migration won’t stop.”

“Trying to build solutions as things are now is like building on sand,” he said.

Like Rodas, Samayoa and Santos both face death threats regularly. In 2018, a hooded assailant struck Santos in the head with a wooden bat before fleeing.

“We have to make clear that we’re facing a very aggressive process of state capture by criminal structures,” he said.

Nery Rodenas, director of the Human Rights Office of the Archbishop of Guatemala (ODHAG), an organization affiliated with the Catholic Church, told Zenger that this process of “state capture” by corruption networks has reached the country’s top courts.

“The Constitutional Court has been completely co-opted,” he said.

In April, Congress rejected the candidacy of Gloria Porras, a jurist with strong anti-corruption credentials who was publicly supported by the U.S., and approved judges widely thought to have ties to Gustavo Alejos Cámbara, a political financier recently blacklisted by the U.S. Treasury Department for allegedly using bribes to control high court nominations.

The Constitutional Court has delivered a series of recent decisions that gutted anti-corruption cases and upheld a new law that allows the government to investigate and dissolve any NGO it deems a threat to public order.

Samayoa said of the NGO law, “It won’t take long to see that this is the first step down the path to Nicaragua,” where President Daniel Ortega has criminalized or incarcerated virtually all meaningful political dissent.

Rodenas, of the Archbishop’s office, agreed: “The situation is very serious, because democratic spaces are being closed … We aren’t living in a democracy.” Rodenas said he has also been a victim of death threats as well as legal harassment by the Public Ministry.

But Rodenas said others have faced far worse — especially in rural areas where Guatemala’s Indigenous majority predominates and criminalization of rights defenders is especially intense.

In many rural areas, the state’s failure to guarantee basic rights and services drives migration, according to Wendy Geraldina López, director of the Indigenous Peoples’ Law Office.

“There’s no education, there’s no health care, you don’t have basic services, what do you do to try to seek a better life? You try to go to the U.S.,” López said.

This will not change, she said, as long as the people trying to push for basic rights are being criminalized or attacked. She said that in a single small community, she represents eight Maya farmers who had serious legal charges leveled against them because they petitioned for better working conditions on an African palm plantation.

López called Harris’ visit “very good, very productive” and said she appreciates the U.S. commitment to counter corruption. “But there was no talk of human rights defenders … If you want to talk about [stemming] migration, you have to talk about that.”

She is also disappointed that the U.S. appears not to be pressuring Guatemala on political prisoners criminalized for their activism.

López said she works on dozens of cases like that of Maya schoolteacher Bernardo Caal, an Amnesty International “prisoner of conscience” who was jailed after organizing votes in Maya communities that rejected dam construction projects.

In March, assailants ransacked the central office of López’s Indigenous Peoples’ Law Office. López said computers, USB drives, notebooks, and security cameras were taken, while other valuable electronics that did not store information were left untouched.

She said her law office was targeted for its work.

“They were obviously looking for information, and trying to intimidate us,” she said.

The Public Ministry is investigating the incident as a normal break-in. López doubts the guilty parties will be found.

“I know the risks of this work. I accept them. And I know that we’re in danger,” she said.

The Public Ministry and the Office of the Presidency did not return requests for comment.