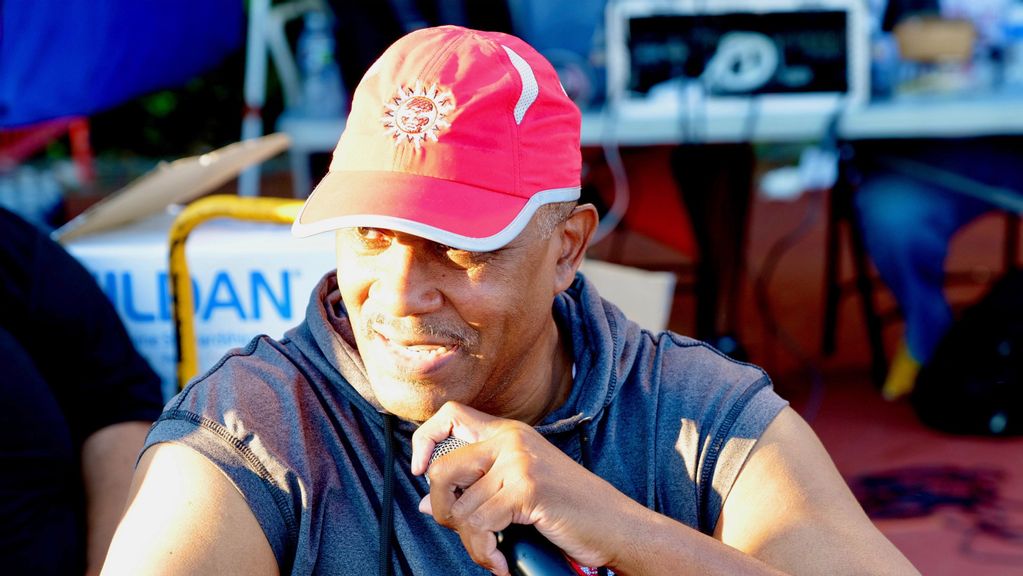 Miles Rawls, the commissioner of the Goodman League, which is hailed as one of best summer outdoor basketball leagues in the country. (Wingsworld Films)

WASHINGTON — Once located just east of the Anacostia River in Washington, D.C., was Barry Farm, 400-plus units of public housing, and one of the most violent and impoverished neighborhoods in the nation’s capital. Today, those units are gone, paving the way for a controversial redevelopment plan to create a mixed-use, mixed-income community that has pitted former residents against the District government.

Yet in the midst of the rubble and new construction, the George Goodman League — one of the country’s best summer outdoor basketball leagues — remains a neighborhood constant. From mid-June to early September, six days a week, thousands of fans crowd “inside da gates” to witness a mix of NBA players, college standouts and local street ball legends battling for hoops supremacy and street cred.

Though city officials have assured the league’s commissioner, Miles Rawls, that hoops will “be part of the new Barry Farm,” he’s not so sure the Goodman games will survive the gentrification over the long term.

Rawls is the heart and soul of the Goodman League. Born and raised in Barry Farm, the 58-year-old former U.S. Army sergeant has been commissioner since 1996.

“When I got out of the military in the summer of ’95, nobody was running the summer league,” Rawls said. “Soin 1996, I picked up the torch. Basically, I got involved to keep something going that was there when we were youngsters running around Barry Farm with nothing to do. Twenty-five years later, here we are.”

“Inside da Gates” is a basketball Mecca

The Goodman League started as a bet among neighbors — Irving Brady, Morty Hammonds, Carlton Reed and George Goodman — on who could assemble and coach the best neighborhood softball team. The foursome later turned their attention to basketball, forming the Barry Farm Community Summer Basketball League in 1977. The league was renamed in 2000 as the Goodman League, in honor of George Goodman, a Barry Farm Recreation Center counselor who was murdered in 1984.

Back then, Rawls was just a raucous fan.

“When the league started, I was just out there hooting and hollering. I had no plans to do any commentary,” he said. “I was just talking loud when the games were going on. Then one of the co-founders, Irving Brady, brought this little record player with a microphone, and that’s when my commentating career started.”

“Back then, Miles was the emcee,” said Brady, now a Goodman League board member. “But my philosophy is ‘each one, teach one,’ so when he got out of the service, I passed the baton to him. And, he’s used his knowledge to make [the league] what it is today, where we also feed the hungry and clothe the needy.”

Over the years, with funding from Nike, Red Bull and a few local black-owned businesses, the “coliseum” has hosted a number of professional players, including former Washington Wizards point guard John Wall, NBA journeyman and area native Michael Beasley, and Brooklyn Nets forward and hometown favorite Kevin Durant, who dropped 62 points in a 2008 game.

Goodman League games have also included local ballers, such as Randy “White Chocolate” Gill, who made $1,000 per game on the East Coast street ball circuit in the early 2000s, and high school All-American Aquille “The Crimestopper” Carr, who was offered a $750,000 contract by Italian League club Lottomatica Roma before even graduating.

The game day atmosphere is electric, according to Rawls.

“We got the DJ pumping music prior to the games, we got the food vendors and that gives it a cookout, family reunion-type of vibe,” Rawls said. “Inside the gates you meet a new friend every day.”

“The Goodman League has brought people to Barry Farm from everywhere across the country,” said longtime resident Paulette Matthews. “I enjoyed going to every day, and looked forward to it. Even those of us no longer in the neighborhood come back for the games.”

Adding to the family-friendly atmosphere at the Goodman games is the lack of illegal activity in an area known for its high crime rate. Operating on a philosophy of “peace, love, and basketball,” Rawls enforces an informal truce that keeps the mayhem at bay.

“All the criminals are inside the gates so, over the years, the Goodman League has been a safe haven for not just Barry Farm, but also for the people that come from all eight of D.C.’s wards, Maryland and Virginia to see the games. Still, I can look around the arena and see folks that I know would be breaking the law if they weren’t at these games,” said Rawls.

“It’s a fact [that the crime goes down during the games], but Miles will tell folks ‘I’m not responsible for you after 10 o’clock; the crooks are back on duty,’” joked Brady.

Barry Farm is one of four District neighborhoods undergoing redevelopment as part of the New Communities Initiative, a D.C. government program to revitalize rundown public housing and redevelop neighborhoods into mixed-income communities. The “new” Barry Farm is also expected to include new roads, a central park, new community facilities and up to 40,000 square feet of retail space.

The plan, however, has its critics.

“The New Communities Initiative is characterized by the same harmful outcomes [as similar federal revitalization plans]: displacement, decimation of community social networks, failure to rebuild the public housing, and not telling people when they’re able to return to their communities,” said Parisa Norouzi, executive director of advocacy group EmpowerDC. “That’s at the root of what’s happening in Barry Farm.”

In 2017, EmpowerDC and the Barry Farm Tenants and Allies Association (BFTTA) filed a class-action lawsuit against the D.C. Housing Authority, and its two development partners, A&R Development Corp. and Preservation of Affordable Housing Inc., demanding revisions to the development plans. Last year, an appeals court sided with the residents, finding that the District’s zoning commission did not properly measure the impact of displacement on community residents, and that the plan did not deliver on an adequate number of affordable units.

“The city tore down our houses because of their terrible conditions, but why should we have to fight to get back there when they finish building new ones?” said Matthews, the association’s vice president.

Matthews, who now lives in another part of the city, considers Rawls a friend but is critical of his reluctance to use the Goodman League as a platform to shine a light on the redevelopment issues.

Rawls explains why: “My voice is not the voice for people coming back to Barry Farm, contrary to popular belief. People from city government don’t really come to the games like that, so there’s no one to talk to about [the redevelopment plans]. I could talk about it all day on the mike, but nobody hears it but the fans, and most these days are not from Barry Farm. I help everybody when I can and where I can, but I don’t do the politics.”

Though Rawls favors redevelopment, he acknowledges the likelihood of permanent displacement for some longtime Barry Farm residents.

“The gentrification needed to happen because Barry Farm is one of the most neglected areas of the city,” he said. “The sad part is that some people might not come back. The city tells me that the Goodman League will be part of the new Barry Farm, but I’ll play that part by ear.”

Opening day for the Goodman League on June 15 was reminiscent of the thousands of past games played near the intersection of Suitland Parkway and Interstate 295: the aroma of barbeque wafting through the air, a capacity crowd,  popular local entertainment, and the best basketball in the area. But, there was also uncertainty in the air.

“I think we’ll play next year,” Rawls said. “[But] when the new people move in, I don’t see them wanting the noise that comes with it. I’m a year-by-year guy, been doing this for 25 years. I’m not cutting the games, I’m not cutting the music down; then it wouldn’t be what it’s been.”

Former president Barack Obama recently visited the Anacostia area and met with youngsters from the Goodman Junior League, a league of the best area middle- and high-school players, for a segment of ABC’s “Soul of a Nation” series.

“I was like a lot of teenagers. I made mistakes,” Obama said in that broadcast. “The reason I tell young people that is because I want them to have a sense that even if you make some mistakes, you still have so much time to reorient yourself and to go down a path that can lead to success.”

Rawls said: “It was great to have a former president. I mean he could be my president forever, to include the Goodman League, that was crazy. It was a good look for the city, for east of the river, and for Barry Farm.