Only 11.3 percent of the schools resumed in-person classes in Mexico City, but now they are closing again.
By Luz Carmen Meraz June 29, 2021
Facebook
Twitter
Linkedin
Email 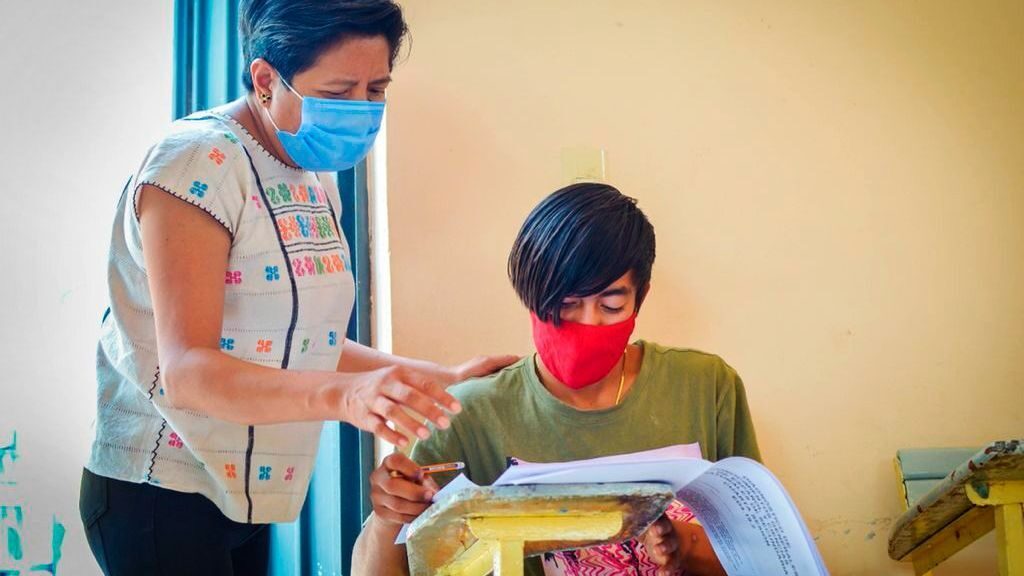 The Mexican government encouraged students to return to in-person classes, but most children did not show up. Those who went to school had to follow strict sanitary measures, including wearing face masks. Even so, infections increased in Mexico City, and schools closed again. (SEP, Government of Mexico)

For more than 15 months, no one heard children laughing in Mexico’s schools. Some states south of the border returned to in-person classes for a short span. In Mexico City, the experiment lasted only two weeks, from June 7 to 18, and children went back to online education after the capital’s epidemiological traffic light shifted from green to yellow.

“It was very rushed for the schools to open. The election we had recently had an influence. Overnight, it [the government] said everything was fine, that there was no risk. I thought it was a mistake and a joke,” said Elizabeth Vicens, who is a mother of two children.

Some parents did send their children to school

Marco García decided to take his daughter to classes. “The first day, I felt a bit lonely because there weren’t many children, but I was happy,” said 8-year-old Emma, García’s daughter.

Following the national health protocol’s mandates, when Emma and her dad arrived at school, they stopped at the screening table. A teacher was in charge of accompanying the girl while she used hand sanitizer and had her temperature taken. Only Emma and the teacher were in the classroom. The rest of her third-grade group — 19 more children — had decided to finish the school year online. Today, everyone is taking remote classes again.

“There was no point in going back; classes will end real soon,” said Ximena Meza, the mother of two girls, 10 and 8 years old. The school year officially ends on Friday, July 9. The June 6 election may have pushed the government to announce the return.

Back to school with almost empty classrooms

When the authorities announced the return to in-person classes, only 11.3 percent of the schools in Mexico City resumed activities. This number represents 1,130 of the capital’s 9,726 public and private schools.

President Andrés Manuel López Obrador had called on families to consider a voluntary return to classrooms since teachers and school personnel have already been vaccinated.

“It is something very important that goes beyond learning: it has to do with the socialization of girls and boys with their teachers; it has to do with affection. School is the second home,” said the president in his regular morning press conference.

Only 1,631,235 students returned to 24,406 schools at the primary and secondary levels in the whole country, when there are 36 million students in Mexico.

“The teachers are already vaccinated, but the children are not. Many think that children ‘get infected with COVID-19 at lower rates,’ but we don’t know. Stronger symptoms and more severe cases in children are being reported,” Meza said.

Arizbeth Cruz also decided to send her children back to school. They live in the state of Mexico, so the suspension of in-person classes in Mexico City did not affect them.

“I spoke with my children and my husband, and we made the decision together. We are already working in person, and they [the children] wanted to return. It seemed important to me because it is part of the process of adapting to the environment. [We also considered] the need to get used to living with a virus and the pandemic.”

“Children only go to school three days a week and for a short schedule, from 8 to 12. Not all the teachers go; just a small population returned. My daughter says there were about 30 students in the whole school and only five in her classroom,” said Cruz.

“I felt weird not seeing all my classmates, but I’m thrilled to be back. I was not afraid of the virus; on the contrary, I really wanted to go back. At home, I was bored. It was very stressful that we were locked up all day instead of going out like we used to do,” said Daniela Baltasar, Cruz’s daughter.

Cruz was worried about her children. “During the pandemic, I noticed that my children were very stressed and very anxious to go out. They are not afraid of the virus. I am a nurse, and we have always talked about the symptoms, the disease and the vaccines. I think that has helped them have high self-esteem and confidence that they know how to prevent it.”

The importance of emotional health

Sandra Schaffer, the director of both the Psicoaprende Center and the Neuroscience for the Individual’s Integral Development Foundation, believes that beyond hygiene measures, one must analyze children’s emotional, social and academic challenges after a year without in-person classes.

“In all this time, children have had different experiences. Some have been more in contact with the family and might have had less academic pressure. But some others have parents who pressured them to meet certain expectations. Unfortunately, many have undergone difficult situations, and some have experienced violence. The biggest challenge now is motivating them and validating their feelings.”

Schaffer believes it was important for the children to return to school.

“We are going to find red flags that have to do with the emotional and social [aspects of life]. Children are concerned about reuniting with their peers. Most have not had much real-life interaction throughout the year. Some have asked me if they can lend their work tools or not, if they can get infected while sharing their lunch, or if they will work as a team. They have many worries, and the most important thing is always to have an assertive communication with them.”

The government created the “Three Vs Plan” (vaccination of school personnel, green traffic light — “verde” in Spanish — and voluntary return) as a path to go back to in-person classes. But days after it was implemented, children did not show up, as many parents felt the risk was too great.

In the states that returned to in-person classes, very few students showed up.

In the state of Mexico, for example, only 250,000 students returned to the classrooms, but the state has more than 4.5 million students.

When COVID-19 cases rebounded in Mexico City, the schools closed again, as established by the national health protocol.

Although school authorities could detect students infected with COVID-19 and send them home, many parents decided it was better to wait. However, for months, the United Nations International Children’s Emergency Fund (Unicef) has recommended that Mexico open schools to prevent the continued rise of school dropouts, which skyrocketed with the lockdown.

Around 5 million students did not register for the 2021–2022 school year. “The schools should have been the last to close and the first to open, but in Mexico, they opted for the opposite,” said Christian Skoog, a representative of the organization in the country, during the Childhood and Adolescence in Mexico forum, organized by the Colegio de Mexico in April 2021.

“I think I made a good decision to send my children to school because as a society, we need to take that step. We have to get used to going out, of course, with all the preventive measures — cleaning, disinfection, face masks, hand sanitizer and face shields — but it is necessary [to start socializing]. I believe the population has to adapt a bit,” said Cruz.

However, the new cases of COVID-19, many of them among young people, forced the government to close all schools again.