VIDEO: Yabba Dabba Rude: Early Man May Have Shacked Up With Neanderthals And Other Stone-Age Humans

A new DNA study of the famous Denisova cave shows they might all have lived together about 45,000 years ago.
By Georgina Jadikovskaall June 28, 2021
Facebook
Twitter
Linkedin
Email 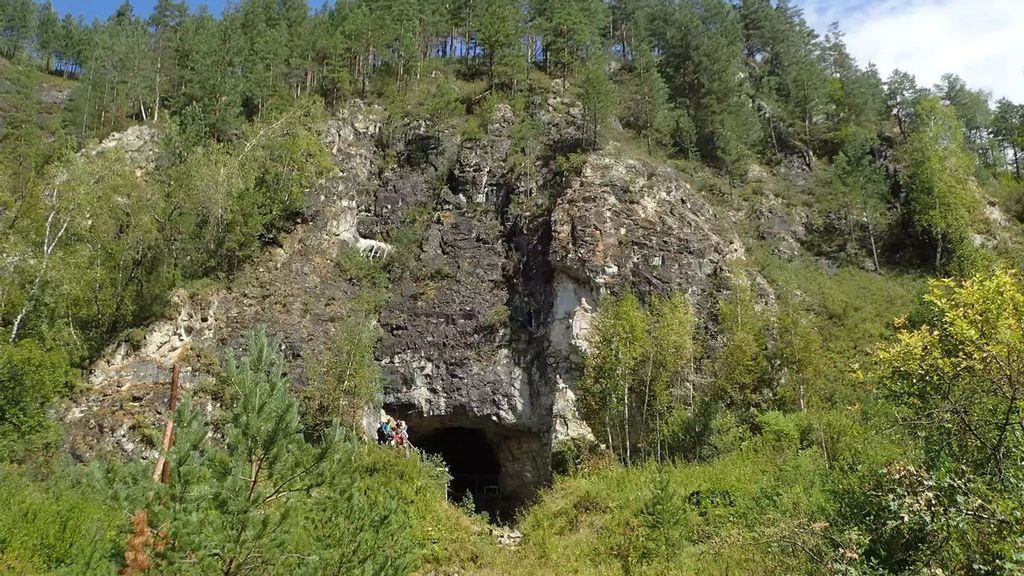 The entrance to Denisova Cave, the famous site in southern Siberia where remains of both Neandertals and their Asian relatives, the Denisovans, have been found. (Richard G. Roberts/Zenger News)

Researchers from Germany who analyzed DNA taken from the well-known Denisova Cave in Siberia have discovered humans may have lived together with their close relatives — the Denisovans and Neanderthals — about 45,000 years ago.

A recent study by the Max Planck Institute for Evolutionary Anthropology in Leipzig, Germany, included DNA analysis of 728 Pleistocene samples — the geological epoch that lasted from about 2,580,000 to 11,700 years ago — seems to confirm that idea.

The Denisova Cave, located in the Altai Mountains in southern Siberia, gained world fame after the discovery of the Denisovans — an extinct race of archaic humans — that scientists believe occupied large parts of central and eastern Asia.

Neanderthal remains have also been found at the site, as well as a bone from a child who had a Neanderthal mother and Denisovan father, proving that both groups lived together in the region.

Nevertheless, only eight bone fragments and teeth of Neanderthals and Denisovans have been recovered so far from the Denisova Cave, which according to scientists cover a time period of over 300,000 years.

Since there are too few fossils to reconstruct the historical events from the cave, scientists have encountered difficulties linking the different types of stone tools and other artifacts to specific hominin groups, such as Denisovans, Neanderthals and modern humans that lived in the Denisova Cave.

Therefore, an international team of archeologists, geneticists, geochronologists and scientists from other branches has been assembled by Michael Shunkov of the Siberian Branch of the Russian Academy of Sciences. They will study the unique site and fill in missing historical gaps.

Richard ‘Bert’ Roberts from the University of Wollongong in Austria, part of the research team, said the analysis of DNA from soils, in addition to earlier studies of DNA from bones determined by the deposits in the Denisova Cave, would help uncover evidence of people and fauna. But bringing all the pieces together is laborious work.

“Just collecting these samples from all three chambers in the cave, and documenting their precise locations took us more than a week,” said Zenobia Jacobs, whose team of geochronologists collected more than 700 sediment samples in a dense grid from the exposed sediment profiles in the cave.

“These efforts paid off, and we detected the DNA of Denisovans, Neanderthals, or ancient modern humans in 175 of the samples,” she said.

During the DNA profile matching, the scientists involved in the study found the earliest hominin DNA belonged to the Denisovans, indicating they produced the oldest stone tools almost 250,000 – 170,000 years ago when the Neanderthals arrived.

The Denisovans and Neanderthals shared the cave until 130,000 – 100,000 years ago when no Denisovan DNA was detected in the sediments.

The last to arrive were modern humans, who showed up about 45,000 years ago.

Elena Zavala explained that modern human mitochondrial DNA first appeared in layers of the Initial Upper Paleolithic, alongside tools and other objects which are more diverse than the older ones.

“This provides not only the first evidence of ancient modern humans at the site, but also suggests they may have brought new technology into the region with them.”

The soil layer that corresponds with that period contained DNA from all three human groups, but researchers are not yet able to provide details of interbreeding.

“The time periods [of each layer] are quite large, so we can’t concretely say if they overlapped or not,” Zavala said.

The scientists also studied animal DNA and identified two time periods where changes occurred in both animal and hominin populations. About 170,000 years ago, the climate went from warmer to colder, and Neanderthals moved in, so did different species of hyenas and bears.

“I believe our Russian colleagues who excavate this amazing site have set the standards for many future archeological excavations with their careful collection of many samples from each archeological layer for DNA analysis,” said Svante Paabo, director at the Max Planck Institute for Evolutionary Anthropology.

“Being able to generate such dense genetic data from an archeological site is like a dream come true, and these are just the beginnings. There is so much information hidden in sediments — it will keep us and many other geneticists busy for a lifetime,” said Matthias Meyer, senior author of the study.