VIDEO: Mine All Mine: New Lunar Rover Will Dig Ice From Moon’s Pole For Astronaut Drinking Water 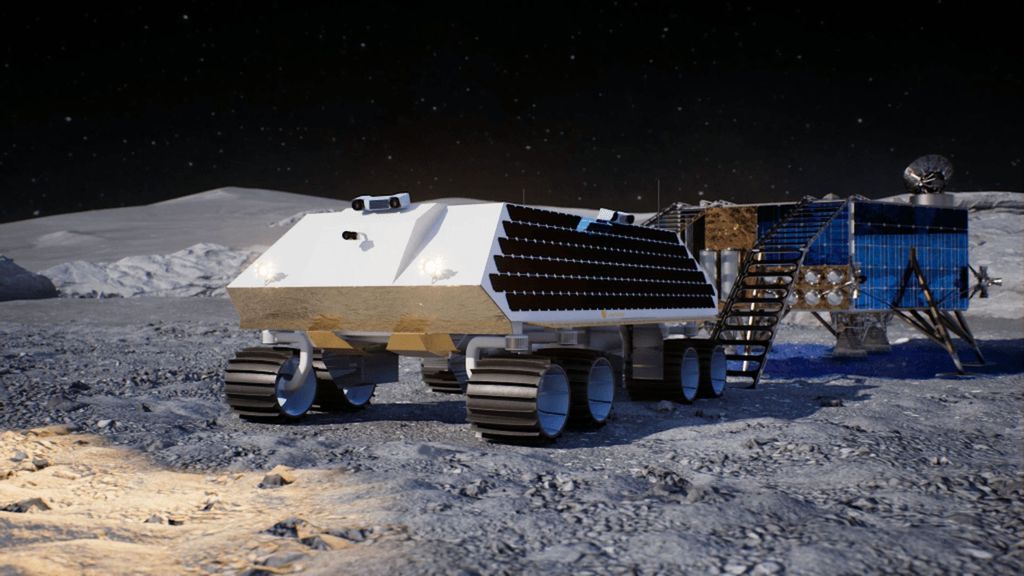 The HIPPO Rover driving down a ramp from the landing craft and driving off toward the mining site was designed by Lunar Outpost. (Lunar Outpost/Zenger News)

A lunar rover has been designed to mine ice from the moon’s South Pole, which NASA believes could be used to solve one of the greatest challenges facing astronauts who plan to spend long stints living on the moon — lack of water.

The Break the Ice Lunar Challenge was devised by NASA to get companies to pitch ideas on how they would extract the frozen water reserves on the lunar South Pole.

With space agencies planning to send astronauts on long-term missions to inhabit planets, it is crucial they are able to produce water and rocket fuel onsite without the need for supply running from Earth.

The moon’s South Pole is home to a permanently-shaded crater under which there is an estimated 154 million lbs (70 million kilograms) of water ice. It would be the first attempt in human history to extract ice from this region.

“Rocket mining is addressing some key tech gaps for NASA for reliable sustainable and ongoing extraction of lunar ice and volatiles from the South Pole of the moon,” said Matthew Kuhns, Masten’s Vice-President for Research and Development.

NASA’s Break the Ice Lunar Challenge called on companies to develop a mining robot that would be able to extract at least 22,046 lbs (10,000 kilograms) of ice over the course of a year-long mission.

NASA believes the ice could then be melted and used to produce drinkable water and jet fuel on the surface of the moon, allowing astronauts to sustain themselves without the need for expensive supply running from Earth.

The HIPPO Rover, seen in the clip driving down a ramp from the landing craft and driving off towards the mining site, was designed by Lunar Outpost.

Lunar Outpost said that the HIPPO Rover “will be able to extract and transport 661 lbs (300 kilograms) of ice at a time.”

The rover will leave the landing site and make its way to the mining site at a top speed of 2.1 mph (3.45 kph) — a blistering pace compared to most lunar rovers — where it will position itself above the ice deposits.

Once in position, the ROCKET M will use its 100-lb rocket engine, developed by Masten, to blast away at the lunar rocks creating craters measuring over 6.5 feet (2 meters) in depth.

As the rocket fires, the icy shards being thrown up from the ground will be drawn up through a pressurized dome and funneled through a vacuum-like system, developed by Honeybee Robotics.

The ice particles are separated from unwanted materials and kept in a storage unit on board the HIPPO.

According to Lunar Outpost, the system is scalable and cost-effective as it doesn’t require heavy machinery or ongoing maintenance.

Furthermore, the stored water can be electrolyzed as needed into oxygen and hydrogen utilizing solar energy to continue powering the rocket engine for more than five years of water excavation.

The HIPPO Rover was designed to optimize mining efficiency, power, and handle the extreme thermal environment of the permanently shadowed regions of the moon.

“Speed matters when the resources need to be repeatedly delivered over three kilometers from the extraction site,” said Pete Wilson, Systems Engineer at Lunar Outpost.

The ice gathered by the ROCKET M can be converted into breathable oxygen, rocket fuel, and water by astronauts who are carrying out long-term lunar missions, potentially unlocking the key to humans spending extended periods of time on other moons or planets.

The Break the Ice Challenge is currently in Phase 1 and the winner will be announced on August 13.