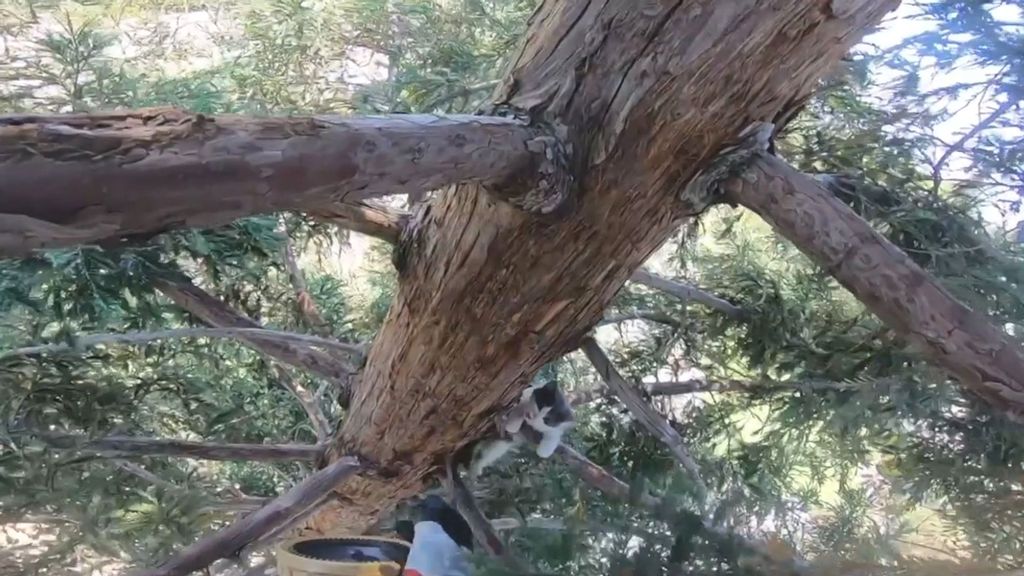 A kitten stuck on the tree in Tower District in Fresno, California on June 18, 2021. (@FresnoFireDepartment/Zenger News)

Firefighters in California were filmed rescuing a frightened kitten that managed to climb up a tree and was trapped almost 60 feet from the ground.

The rescuers responded the call, despite the fact that the team also had to handle multiple other emergencies on an extremely busy day.

The Fresno Fire Department’s Ladder 9 emergency unit responded to a call about a kitten trapped in a tree in Tower District in Fresno, California, on June 18. The footage is now going viral by showing the incredible height that they needed to climb to complete the rescue.

The footage shows a fireman climbing the 105-foot aerial ladder to reach the scared animal.

When firefighters arrived, they found the small cat meowing in a tree. They climbed a total of 60 feet to reach the cat.

The stranded gray and white kitten can be heard plaintively meowing as it perches on a thin branch and the ladder slowly approaches.

The cat then seems to be starting to lose its grip, hanging on to the tree by its two front paws as it is finally grabbed by the fireman and placed into a bag, still meowing.

With the cat safely in the bag, the firefighter then starts to lower the ladder back down, and hands the kitten to a man on the ground.

The video ends with the fireman saying to the rescued kitten, “I bet you’re not gonna be climbing any more trees buddy.”

The emergency crew rescued the animal in heat of 109 degrees Fahrenheit during a shift that saw multiple emergencies, including two large-scale fires, according to the Fresno Fire Department.

Domestic cats are prone to wandering and can get easily confused when outdoors, even when navigating through familiar settings, according to Cats Protection, a U.K.-based organization focused on promoting cat safety and proper pet education.

As a solution, Cats Protection recommends microchipping pet cats, or fitting them with an identifiable collar with a quick-release or snap opening.

“This gives your cat time to lay their scent around, which will help them navigate back to your home,” according to Cats Protection. “The first time you let your cat out, do so before a meal so they will be more likely to return for food when you call.”