Orphaned youngster recovers from horrific injuries with new family at a tusker reserve. 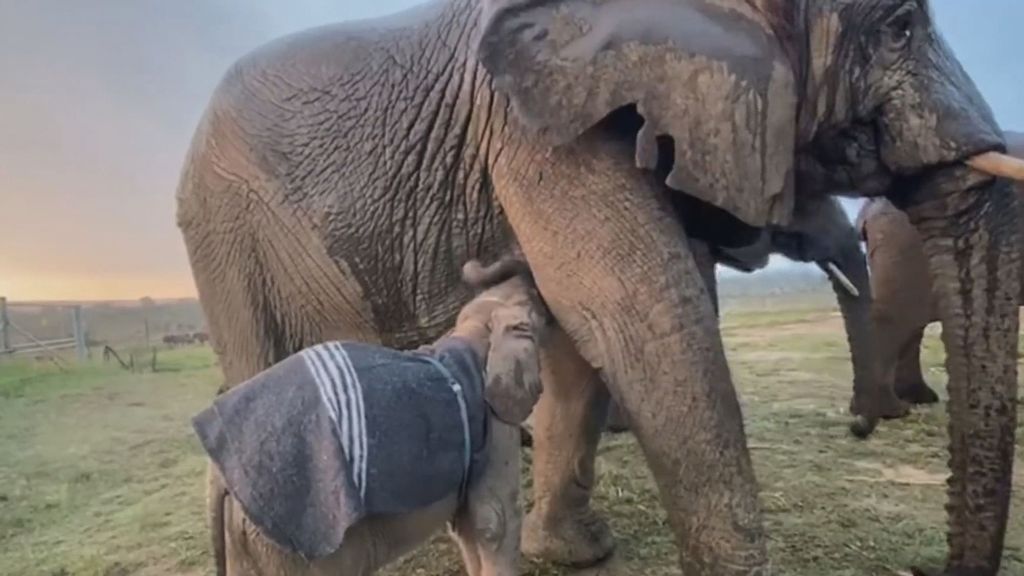 An albino elephant calf frolics in the mud and gets milk from its adoptive mother at a South African elephant orphanage.

Rescued calf Khanyisa is cared for by experts and its adoptive herd at the Kapama Private Game Reserve in Limpopo.

“Our purpose is to care for and rehabilitate orphaned and displaced elephant calves and ultimately integrate them into a new herd of elephants,” said Tamlin Wightman, media manager at HERD (Hoedspruit Elephant Rehabilitation and Development) and Jabulani Safari.

HERD is on the grounds of Jabulani in the Kapama Private Game Reserve, which is home to over 40 mammal species, 350 bird species and the Big Five (lion, leopard, rhino, elephant and African buffalo, according to the website.

With its growing numbers of calves in recent years, resulting from the poaching of elephant mothers, as well as man vs. elephant land conflicts, Adine Roode, HERD founder, built the elephant orphanage to provide an adoptive family structure for calves in need.

“The orphanage was purposefully built close to the Jabulani herd of elephants, a special herd consisting of predominantly rescued orphaned elephants,” said Wightman.

“Due to their shared backgrounds, these elephants are unique in their ability to create bonds that exceed the bounds of blood. And, as a result, are very much open to accepting new orphans into their family.”

“Khanyisa, an orphaned albino calf, came into HERD’s care in January 2020. She had been found at 4 months old, alone and entrapped in a poacher’s snare, with no herd in sight.

“She had suffered horrific wounds as a result, including severe lacerations to her neck, ear, cheeks and the top of her head. Under the care of our veterinarian team and dedicated elephant carers, Khanyisa was able to recover from her wounds and also receives milk from a bottle, fed to her by our carers.”

Khanyisa has been slowly integrating into the Jabulani herd of elephants and now spends all day foraging in the wilderness with them, walking through the private Big 5 reserve with carers offering protection and support.

Although she nurses from her adoptive mother, her main source of milk is from bottles.

“She has formed amazing bonds with the elephants of the herd, particularly with her new adoptive mother Lundi, her allomothers Bubi and Tokwe, and Kumbura and Timisa, two other orphaned elephants who have been fully integrated into the herd,” said Wightman.

“At the end of each day, Khanyisa comes back to the orphanage to spend the night in the company of her companion sheep, Lammie and Nungu, and receive her milk bottles from her carers throughout the night.”

She will be fully weaned at around 4 or 5 years old, Wightman said.