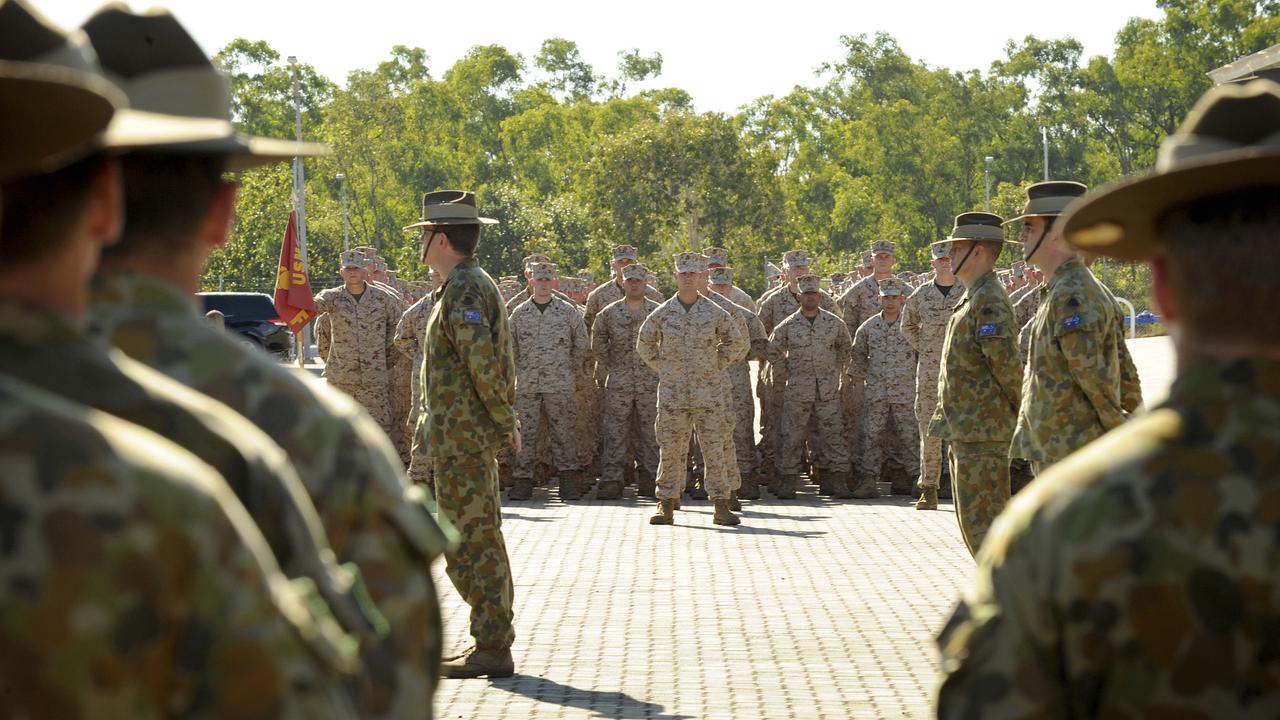 The more than 2000 US Marines stationed in northern Australia are said to be ready for action. (AAP Image)

The declaration comes as Defense Minister Peter Dutton hints that while maintaining peace is a “first priority”, the visiting Darwin-based force could soon swell amid growing Indo-Pacific tension.

Dutton says there’s no sense pretending Australia could out-stock or defeat a large foreign enemy and the time may be right to look, along with the Americans, at “locating additional assets in our country”.

Around 2200 US servicemen and women have so far been posted to the Northern Territory this dry season already.

As part of the ongoing posture initiative to promote regional stability, they’re the 10th such annual Marine Rotational Force deployment.

And while traditionally tasked with fostering teamwork with the Australian Defense Force and helping bolster ties with Australia’s neighbors, Banning is clear that the contingent has a third duty.

If required, they’ll respond to crisis.

“As military members, it’s our job to be prepared for the greatest range of what-if possible,” Banning said.

“This is to demonstrate the strength of the US-Australian alliance and the US commitment to the region.”

That could include humanitarian assistance, disaster relief, evacuation missions, reinforcing US embassies or military operations.

Darwin’s location just south of more than a dozen Asian countries and some of the world’s busiest shipping lanes makes it a strategic stepping-off point.

The United States’ presence gives its decision-makers a choice should trouble erupt.

“When you talk about being able to have a military capability in a position to respond to crisis or contingency, where you start from dictates the range of possible options,” Banning says.

The decade-old deployment under the 70-year-old ANZUS Treaty isn’t the first time Marines have been based in Australia.

“From a Marine Corps specific perspective, we’ve had a very deep relationship with Australia since World War 2” Banning says.

Tens of thousands of Marines called Australia home-away-from-home during the Pacific campaign against the Japanese.

The First Marine Division’s song is Waltzing Matilda and its banner features the four stars of the Southern Cross.

“The hospitality Australia extended to the Marines, where Melbourne families adopted us and then wrote letters back to young Marines’ parents, it’s really moving,” Banning says.

“For Marines, in particular, the relationship with Australia is deeply personal.”

After quarantining at a secure facility, the Americans live and work with the Australian Defense Force at bases in and around Darwin. It can’t help but forge a bond.

“We eat in the same mess halls and attend the same gyms,” Banning says.

“It really is one of the deeper benefits of the rotation, that those friendships continue to grow.”

The engagement also includes volunteering at schools and in Indigenous communities and participating in ANZAC Day.

“And we saw during Cyclone Marcus in 2018 both ADF personnel and Marines out cleaning up the place we call home.

“These are people who give back.”

Marine corporal Alexander Lorenzini, 23, says the Top End’s balmy dry season is almost as good as the chance to collaborate with the ADF.

“After quarantining, I realized every day was a perfect day for the beach or a round of golf,” he says laughing.

“We’ve had so much fun getting out and about and meeting people in Darwin, and we’ve even seen the Jumping Crocs on the Adelaide River.”

But Corp Lorenzini is also quick to point out the deployment isn’t just fun in the sun. He says and his fellow Marines are focused on improving what he calls interoperability between the USMC and ADF.

While here, in late June, the Marines will also train with a visiting contingent of Japanese soldiers.

That’ll also include the US-Australian war game Talisman Sabre, from late June to mid-August, and the Marine-specific live-fire, high-end warfighting Exercise Koolendong, with the Australian Army in August.