VIDEO: Scientists Prove Elephants Can Purse Lips To Squeak As Well As Trumpet With Their Trunk

Scientists in Austria have found that Asian elephants can produce sound with their lips, not just their trunks. 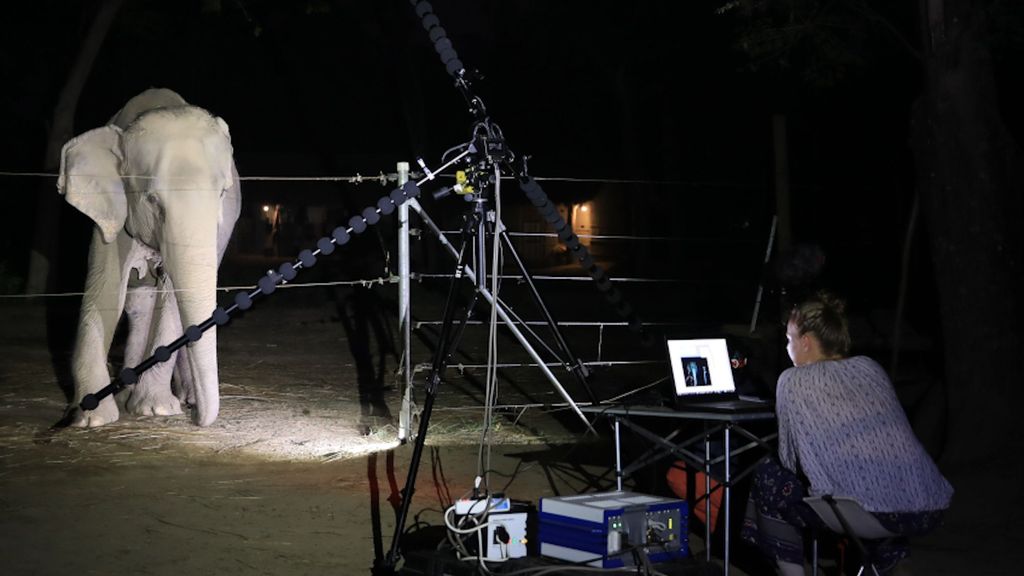 Elephants from the study were filmed with acoustic cameras to reveal they can squeak with their lips. (Gunnar Heilmann/Zenger News)

Austrian scientists found that Asian elephants can not only trumpet but are also able to communicate by squeaking through their mouths.

Behavioral biologists Veronika Beeck and Angela Stoger-Horwath from the Department of Behavioral and Cognitive Biology at the University of Vienna in Austria published an article in BMC Biology on June 17 that demonstrates new sound capabilities and social learning in elephants.

Beeck and Stoger-Horwath, who studied squeak sounds of Asian elephants in Nepal, used an acoustic camera with a 48-microphone array that, similar to a thermal camera, can visualize sounds in colors and precisely locate the source.

“Our images clearly demonstrate that the squeaks are emitted by the mouth and not the trunk,” Beeck said.

According to scientists, elephants’ higher-pitched sounds are not well researched but are extremely important. The low-frequency rumble signals are far more well known, despite being undetectable to human ears.

The two researchers believe Asian elephants produce squeaks by pressing air through their tensed lips, which induces the lips’ vibration.

Beeck explained that this technique is reminiscent of the way trumpet players tightly purse their lips to produce higher-pitched sounds.

“Apart from human brass players, this technique of lip buzzing to produce sound has, to our knowledge, not been described in any other animal species and is therefore considered unique in the animal kingdom,” she said.

Also comparable to trumpets, the elephants’ iconic ring is produced by a blast of air that vibrates throughout the walls of the trunk, similar to how sound is produced in most brass instruments.

Beeck’s research follows a previous study by her mentor Angela Stoger-Horwath which showed that elephants are capable of learning novel sounds after an Asian elephant learned several Korean words by imitating its trainer in a Korean Zoo.

Although only 19 of the 56 studied elephants squeaked, the current research suggests that squeaks might be learned as well.

“Given the complexity of the proposed mechanism, the surprising absence of squeaking in most of the unrelated subjects and the indication for volitional control, we hypothesize that squeak production involves social learning,” the study said.

But elephants’ social abilities go far beyond sound imitation. Studies have shown that elephants learn from the behavior of their elders and may have problem-solving capabilities.

In another study from 2014, Indian scientist T.N.C. Vidya observed social organization and behavior in free-ranging Asian elephants in southern India. One of the studied elephants, Genette, was bothered by a calf trying to suck at her mammary glands. Genette avoided and kicked the calf away before offering the tip of her trunk to the calf as an alternative. This trunk-sucking behavior is unique and could point to problem-solving techniques.