VIDEO: What A Mug Shot: Drug King Seized With Painting Showing Him With Escobar And Capone

The boss and suspects are believed to belong to a criminal organization dedicated to cocaine trafficking on the Costa del Sol. 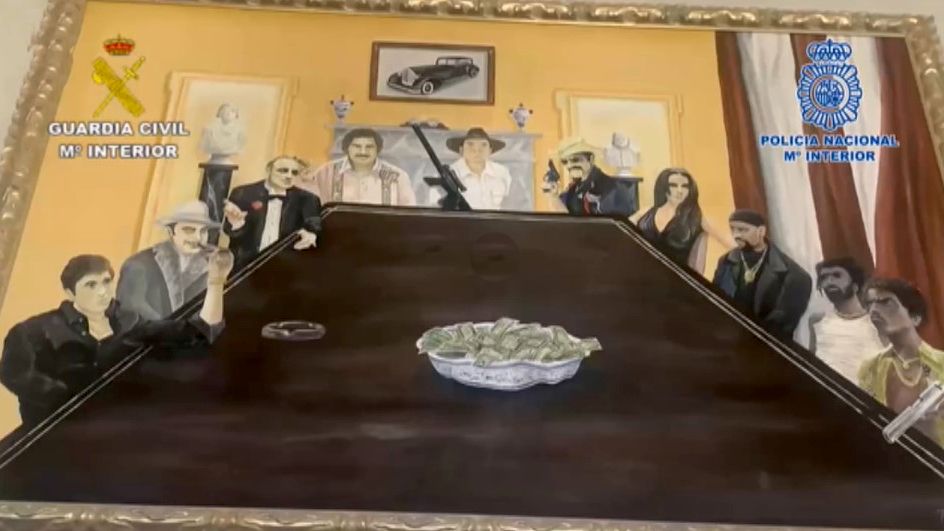 Cops have arrested a drug lord at his Costa del Sol mansion, where they found a huge painting of him seated next to Pablo Escobar, Al “Scarface” Capone and other big-time criminals.

As the alarms in the house went off, the suspect locked himself in his panic room. Meanwhile, the police officers spotted a huge framed painting hanging on a wall, depicting the suspect seated at a table with a variety of real and fictional mobsters. The table is empty, save for an ashtray and a bowl overflowing with cash. Not surprisingly, the artist did not sign his or her work.

Capone is an infamous Chicago mobster who made his fortune selling illegal liquor during America’s Prohibition era roughly a century ago, while Escobar was a Colombian drug lord whose brutal reign stretched from the 1970s to the early 1990s.

The footage also shows how the man — whose name has not been disclosed by authorities — enjoyed a life of lavish luxury. His house was filled with several safes containing jewelry and large quantities of cash, while the outdoors featured a large swimming pool.

The arrest was one of 14 simultaneous arrests made in Spain’s Malaga and Seville provinces and in the city of Ceuta by the Spanish Civil Guard and the Spanish National Police.

Their investigation had the support of Interpol and involved more than 350 personnel.

The suspects are believed to belong to one of the most active criminal organization dedicated to cocaine trafficking on the Costa del Sol.

The arrests were the culmination of an investigation that began in April of last year, when cops intercepted a van carrying 80 kilograms (about 180 pounds) of cocaine.

The officers followed the vehicle to an apartment, where they seized a further 3,042 pounds (1,380 kilograms) of the substance and made five arrests.

Weeks later, the police intercepted a vehicle carrying an arsenal of firearms — including two assault rifles — belonging to the same group.

The final blow to the group came in mid-June this year, when 4 arrests were made, most of them in the city of Marbella. Cops also seized a dozen vehicles along with weapons, money and drugs.

The 13 other men arrested are believed to be the mansion owner’s subordinates, and 11 of those have been taken into preventive custody.

The group reportedly laundered its money by buying thoroughbred horses.

Markelle Fultz Reveals What Really Happened With His Shot, Shoulder