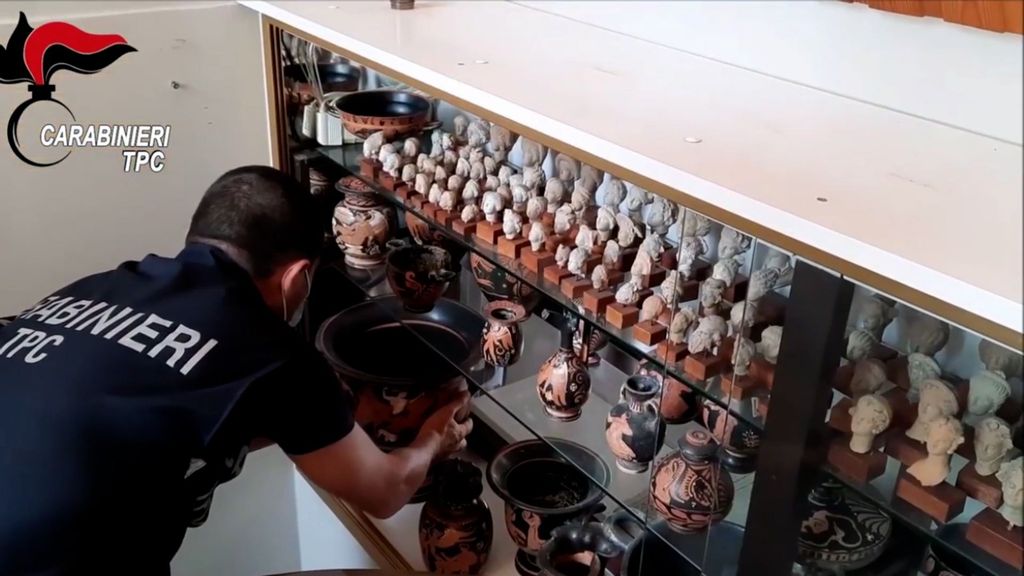 During the course of the search, archaeological treasures were recovered, consisting of hundreds of Apulian figurative ceramic finds and other Daunian stelae, all illegally exported from Italy. (Zenger News)

Hundreds of priceless artifacts, some of them dating to the sixth century B.C., that were plundered in Italy and ended up in the collection of a wealthy Belgian man have been returned.

The collection was returned to Italy by the Carabinieri of the Nucleus for the Protection of Cultural Heritage in Bari. (The carabinieri is a military police force.)

The Patrimonial Guardianship Division of the Carabinieri Police Forces Responsible for the Protection of the Cultural Heritage announced it had recovered about 800 objects “of exceptional rarity and inestimable value” on June 21.

According to police, the illegally excavated archaeological objects include stelae, amphorae and other works. They came from clandestine excavations in Apulia, one of the richest archaeological regions in Italy.

The investigation began in 2017 after a state archaeology laboratory in Apulia noticed that the decorative elements in a Daunian funerary star in European art catalogs belonging to a “rich Belgian collector” resemble those found in a museum in southern Italy.

That flat plate from Daunia, a historical region of Apulia, from the Belgian’s collection was missing a piece in the center.

An official from the restoration laboratory noticed in December 2018 that the piece from the museum’s collection was perfectly superimposed and completed the design of a shield and a warrior on horseback that were missing from the gravestone.

According to the carabinieri, the collection identified 782 objects that could be considered Italian national heritage and were illegally exported. A request to bring them back to Italy for examination by archaeological experts was eventually accepted by the Belgian courts, despite several attempts by the unnamed Belgian collector to challenge the repatriation.

In addition to the gravestone, the Belgian’s collection included vases painted with red figures, amphorae, black glazed pottery and numerous terracotta figurines, which are the remains of cultures from the sixth and third centuries B.C.

“During the course of the search, a veritable ‘archaeological treasure’ was recovered, consisting of hundreds of Apulian figurative ceramic finds and other Daunian stelae, all illegally exported from Italy, which were then seized in Belgium,” read the police statement.

Hundreds of pieces of archaeological finds stolen by the Belgian collector and recovered by Italian police have been estimated at 11 million euros ($13 million).

The returned objects were recently exhibited at Castello Svevo in Bari. Historical treasures will now be subject to other archaeological studies, while the carabinieri continues to investigate their origin.