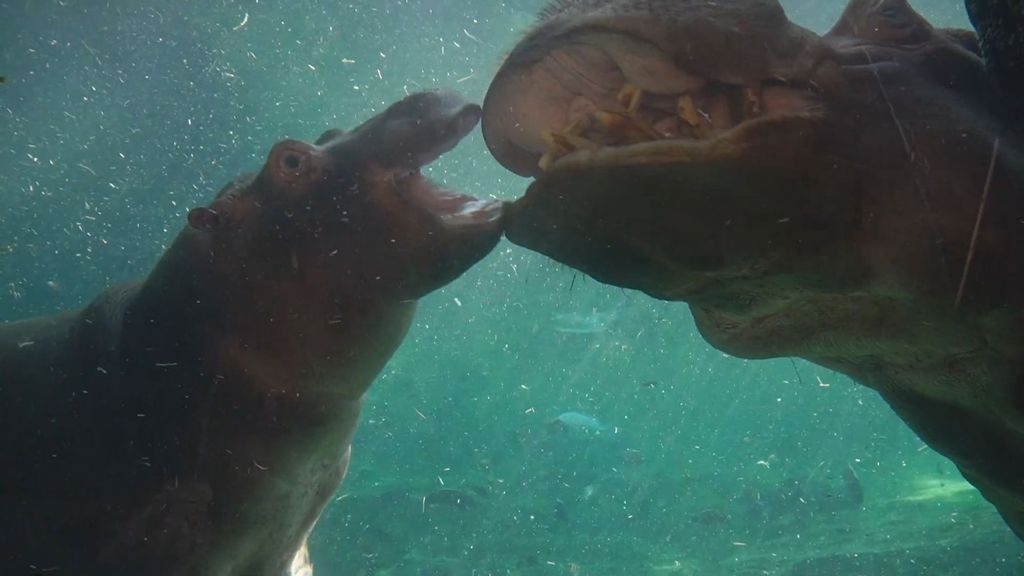 Hippo calf Gori dives with a member of his family in a large aquarium at the Valencia Bioparc in Spain. (BIOPARC Valencia/Zenger News)

Hippo calf Gori explores the depths of his enclosure pool with his parents at  Valencia Bioparc in Spain.

The hippo, which recently turned 13 months old, was filmed exploring the zoo’s Kitum Cave, which re-creates the habitats of African lakes and rivers.

Gori, the calf (Hippopotamus amphibius), is the son of Raf and Rigas.

“This fascinating species is listed as vulnerable on the IUCN (International Union for Conservation of Nature) Red List and its main threat is habitat loss,” the zoo said.

“Their population has been dramatically reduced and 90 percent of the hippos that inhabited Africa in the last century have already disappeared.

“This decline threatens the aquatic ecosystems of the great African lakes and, with them, the life of numerous aquatic species and fish,” the zoo said.

Nicknamed the “river horse” by the Greeks, the semi-aquatic hippos can stay underwater for up to six minutes. Eyes and nose remain raised, allowing them to breathe and see what is happening on the surface, keeping most of their body submerged.

The common hippopotamus spends much of its life underwater and increases its activity at night when it goes ashore to graze. Due to their nature, males not only protect a piece of land, but also a few hundred meters from the shores of lakes and rivers where they live.

Males usually compete with each other for dominance of the herd, using their long lower fangs as weapons.

Considered one of the most dangerous animals in Africa despite its herbivorous diet, the Nile hippopotamus is the one that causes the most human deaths on the continent. It is one of the reasons why it is threatened, in addition to being hunted for its meat and ivory teeth.

“The Bioparc is the only place in Spain that offers an underwater view of these ‘giants’ coexisting with different species of fish in a perfect symbiotic relationship. It is a chance to observe the functioning of an ecosystem in danger,” said a Bioparc spokesperson.

Bioparc Valencia is considered a new generation zoo, which recreates wild habitats for its animals in the eco-system areas of the Savannah, Madagascar and Equatorial Africa.

The bioparc offers visitors an immersive experience, without barriers, allowing them to see different species co-existing as they would in nature.