Five of the duds were defused, but two had to be detonated.
By Georgina Jadikovskaall June 25, 2021
Facebook
Twitter
Linkedin
Email 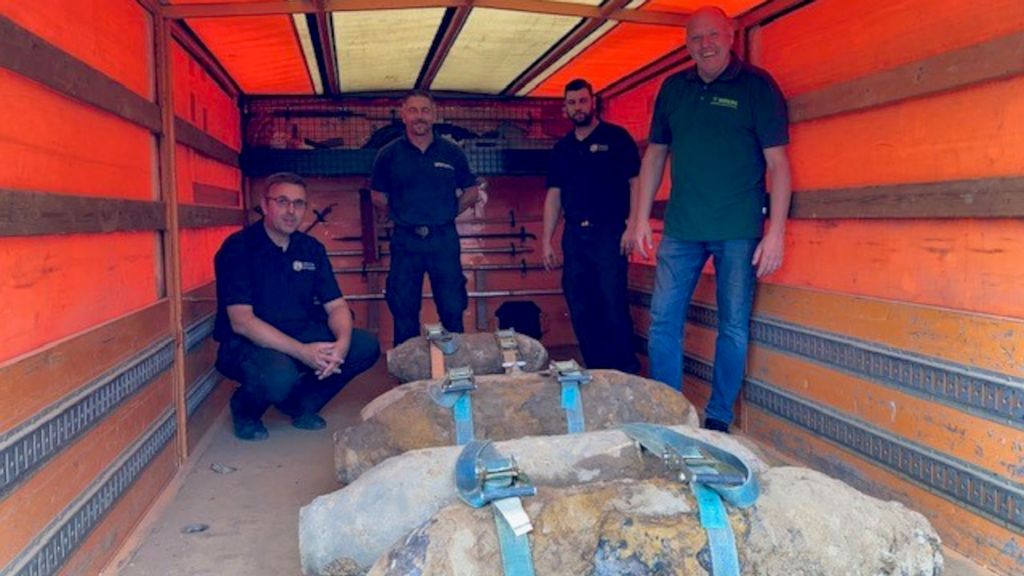 The World War II bombs that were dismantled in the city of Cologne, Germany, on June 24, 2021. (Stadt Koln/Zenger News)

The city of Cologne in Germany evacuated around 260 people to defuse seven World War II U.S.-style bomb duds that were found on an exploratory site.

Of the seven contact fuse bombs, four weighed 500 pounds and three weighed 100 pounds. They were discovered on private property in the Cologne-Rondorf area in Cologne on Thursday.

The danger zone covered over a 1500-foot radius, according to an onsite analysis by the Bomb Disposal Service and the public order office of the city of Cologne.

After discovering the bombs, the city ordered an immediate deactivation of the aerial bombs and evacuated a total of 260 people to secure the site and avoid casualties.

“When all people leave the evacuation area and the ambulance transports are completed, the public order office will give approval to defuse,” said a city spokesperson.

Though such a discovery may seem uncommon, thousands of unexploded bombs — which may be able to detonate — are discovered every year, particularly in Germany. These bombs have to be defused or detonated in a controlled explosion, in some cases requiring evacuation of thousands of people.

The first such aerial bombs to ever be delivered to their targets by air were launched by the Austrians against Venice in 1849 during the First Italian War of Independence. The Austrians, led by artillery general Franz von Uchatiussingle, sent several unmanned hot air balloons to drop bombs over their target, according to the Basque Library at the University of Nevada, Reno.

Aerial bombing was also prominent during World War I, when the Germans organized strategic bombing by their Zeppelin airships over Britain and France. German forces targeted logistic and manufacturing centers, and though the number of civilians killed by aerial machines remained small, the bombings caused widespread public terror, according to the British Library.

During World War II about 10 percent of German bombs failed to detonate, and Allied bombs had a failure rate of 15 to 20 percent. Bombs were especially likely to fail if they hit soft soil or used a pistol-type detonating mechanism rather than fuses.

Bombs can be reactivated by either direct impact, vibration or heating, according to a 2019 guide from the Construction Industry Research and Information Association.

At 1:20 p.m., Cologne reported that five of the bombs had been defused. The other two had to be detonated in a controlled environment.

Residents were allowed to return to their houses and apartments after the bombs were detonated.