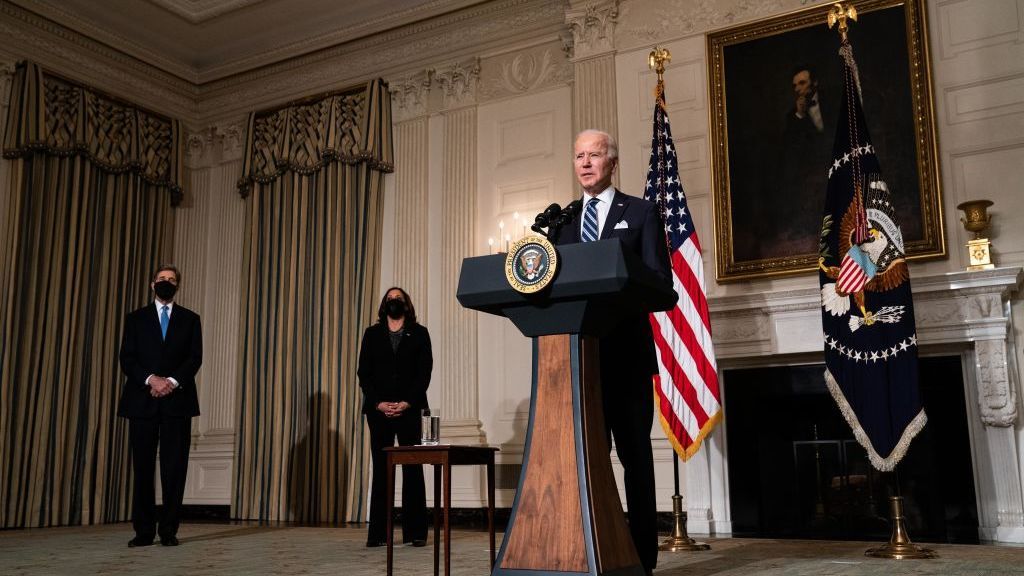 After launching his administration by enacting one of the top wish list items for U.S. environmentalists, Republican critics argued President Joe Biden’s executive order, putting a pause on petroleum exploration on public lands, was bad policy.

They also claimed it violated the law and would hurt local communities.

A federal court recently put an early roadblock in front of Biden’s efforts to limit oil drilling on public lands. The push is having unintended consequences in New Mexico, where Democrats are working to limit the damage it would have on the budget, while supporting Biden’s message.

Last week, a U.S. federal judge agreed with the attorneys general of 13 states who filed suit after the restrictions were announced in January. The finding said government regulators should have gone forward with planned auctions for the rights to drill in Louisiana and Alaska.

In pressing the suit, Louisiana State Attorney General Jeff Landry argued that Biden’s policy to pause leasing activities in the Gulf of Mexico would cost his state $57 million in uncollected fees. However, while New Mexico is more reliant on royalties from drilling on federal land, the state and its Democratic governor and attorney general didn’t join the lawsuit.

New Mexico Democrats are trying to work with Biden, while also trying to reverse, or find exemptions, in the policy on economic grounds.

New Mexico Gov. Michelle Lujan Grisham said she supports Biden’s climate goals, but that it is crucial to take “into account the individual circumstances and near-term financial reality of states like ours.”

Grisham argued her state’s progress in introducing renewable energy sources should earn it some relief in an energy transition.

“New Mexico knows what it takes to responsibly manage an ambitious, complex and long-term transition and economic and energy diversification effort in a way that protects impacted families and communities and our state bottom line, creates good jobs and strengthens our economy, and gets us to where we absolutely need to be to protect our land, air and water,” Grisham said in a statement.

“As the nation’s largest onshore producer of oil and natural gas on federal lands, no state’s economy or budget stood to lose more as a result of the leasing pause,” the association said in a statement released after the recent federal court ruling. “Oil and natural-gas development on federal lands is a critical part of New Mexico’s economic and fiscal health, providing $1.5 billion in revenue for our state budget, public schools and first responders.”

On June 15, Judge Terry Doughty in the U.S. District Court for the Western District of Louisiana granted a preliminary injunction against the Biden administration, temporarily overturning the president’s early efforts to halt drilling for oil and gas on federal lands.

“This is a victory not only for the rule of law, but also for the thousands of workers who produce affordable energy for Americans,” Landry said in a statement.

“Millions and possibly billions of dollars are at stake,” Doughthy wrote in his ruling that found both equity and public interest to be on the side of the states.

“Local government funding, jobs for Plaintiff State workers, and funds for the restoration of Louisiana’s coastline are at stake. Plaintiff States have a reliance interest in the proceeds derived from offshore and on land oil and gas lease sales,” he wrote.

Some Democrats are seeking a compromise that lets state governments maintain revenue levels for an orderly transition. Sen. Martin Heinrich (D-N.M.) has introduced congressional legislation that will reward states with federal oil leases if they meet climate-change goals.

“The global energy landscape is undergoing a massive transformation, and states like New Mexico need to be ready,” Heinrich said. “The Schools and State Budgets Certainty Act will provide a predictable glide path for state, county and tribal governments to move away from their current dependence on federal fossil fuel revenues and allow a managed transition to more reliable sources of funding.”

In addition to presenting the potential lost revenues, the 13 state plaintiffs also argued that the Outer Continental Shelf Lands Act of 1953 and the Mineral Leasing Act of 1920 explicitly prohibited any pause in leasing activity by the government.

“We need to update our fossil-fuel leasing laws across the board to establish a cleaner, more sustainable standard of use for our public resources,” said Raúl M. Grijalva (D-Arizona), who chairs the House Natural Resources Committee, which has oversight jurisdiction over energy leases conducted by the Department of Interior.

Industry opponents of the moratorium on leasing argued it hurts the economic recovery, national security and even environmental goals, as it would likely result in more oil imports from countries with less stringent regulations.

“Now is the time for the administration to put an end to this ‘import more oil’ policy that threatens American jobs and deprives state and local communities of much-needed revenue, all while likely increasing emissions and the risks of climate change,” said Kevin O’Scannlain, the vice president of upstream policy at the American Petroleum Institute in Washington, D.C.

However, critics of the ruling note the federal judge in the case was appointed by former President Donald Trump, a Republican who expanded federal energy leasing while in office. Grijalva also said oil-state attorneys general did not protest when the Trump administration paused pandemic-era scheduled leases when oil prices were low, which he said benefited the industry at that time.

“Our economic and environmental future shouldn’t be subject to rulings based on industry-funded science or opportunistic complaints that we didn’t hear until President Biden was sworn into office,” Grijalva said.

After pledging on the campaign trail to make climate change a priority in his administration, Biden issued a pause on leases in the controversial Alaska National Wildlife Refuge on his first day in office, then following that up a week later with a Jan. 27 executive order mandating a pause on oil and gas leases on all federal lands, sparking a sharp rebuke from legislators with fossil-fuel interests in their state.

Still, after the initial split with his predecessor, Biden has since approved or continued a few Trump-era energy policies, including a recent decision to back the so-called Willow project, a new find on Alaska’s North Slope which promises to produce 100,000 barrels of oil a day while generating $10 billion in state and federal revenue.

During a hearing on the suit, the government acknowledged that oil and gas lease sales planned for March 2021 in both the Gulf of Mexico and Alaska’s Cook Inlet were halted due to Biden’s order, according to Landry. It is likely at least seven other scheduled lease sales also canceled for that reason.

Consequently, Doughthy ordered the Department of the Interior to move forward with the Gulf of Mexico and Alaska lease sales.

The Department of the Interior made no public statement on whether it would appeal the ruling or otherwise make changes in its schedule to lease public lands for oil and gas drilling.