Will Biden Build Our Bridge? Nationwide Scramble For Cash From Infrastructure Deal 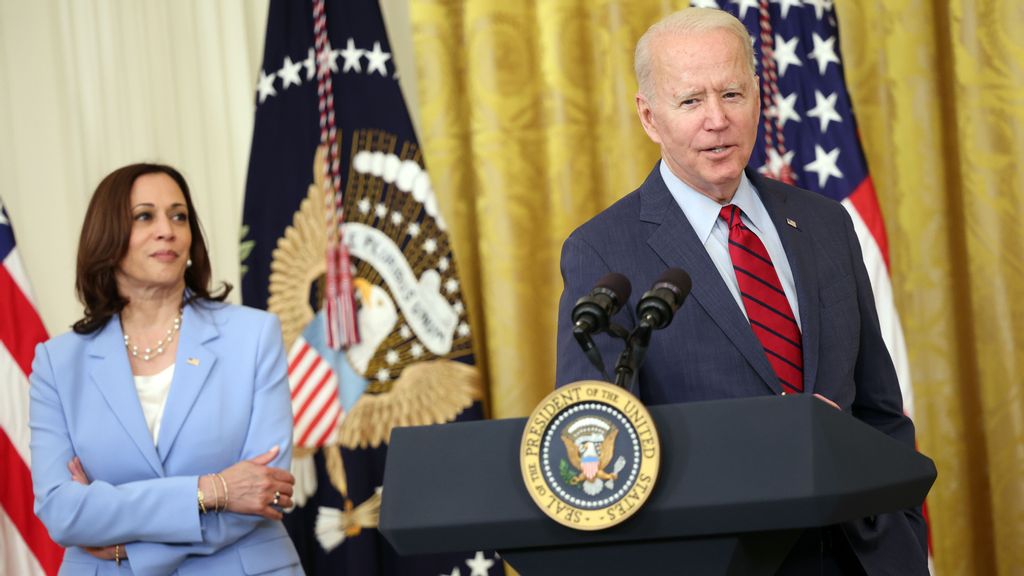 West Virginia wants a 28-mile long tourist railroad to prime fishing territory. Ohio needs to do something about a Cincinnati interstate bridge which drops concrete on commuters.

In Pennsylvania, hundreds of bridges are life expired, and six miles northeast of Detroit, two billion gallons of raw sewage are dumped into Lake St. Clair each year.

This is just a taste of the reality of the battle over President Joseph R. Biden Jr’s infrastructure deal: in state houses, town halls and county seats across the country, officials are waiting to find out if their hopes to upgrade roads, railroads, bridges, water systems, ports and broadband will be funded.

At the White House, Biden hailed a deal between Senate Democrats and Republicans worth $973 billion over five years as a breakthrough after weeks of talks.

At a national level, part of the debate over how to pay for the bill was centered around tax policy. Biden proposed financing the bill by raising the corporate tax rate from 21 to 28 percent, while Republicans were hoping to finance the bill using existing programs and leftover money from the COVID-19 relief fund. The deal will use new a mix of new spending and repurposed cash already appropriated, including surplus emergency COVID unemployment relief.

Another piece of the negotiations centered on what counts as “infrastructure.” Congressional Republicans have pushed to narrow the scope of the bill to traditional surface transportation and broadband.

But the Biden administration has broadened the definition beyond bridges and freeways to include some new things: research and development ventures, expanded long-term care services under Medicare and even an overall effort to reform systems that have historically disadvantaged minority communities.

Both sides compromised with many of Biden’s priorities set for a second, separate bill set to be passed in the Senate by only the 50 Democrats, using reconciliation, a process which avoids the 60-vote filibuster.

Before the deal was struck, David Ditch, a policy analyst at the Heritage Foundation, a conservative think-tank, told Zenger News that limiting the bill to physical assets would be the only way to get bipartisan support. Redefining “infrastructure” to broaden its definition was misleading to voters who support federal funding for surface transportation, he said.

Winkler said he was optimistic that a bipartisan surface transportation bill advances through Congress.

“There’s still a ton of uncertainty over how these issues get solved, but there is a lot of bipartisan interest in solving them,” Winkler said.

Now, the real race for states, cities, counties, towns and villages across the country begins: to get their project funded. Here Zenger looks at some — and what they need from Biden and Congress to go ahead.

In West Virginia, there is hope that the infrastructure plan can be used to upgrade its rail network, whose 2,300 miles of track are heavily-focused on freight but which also include existing scenic railroads the state believes can boost tourism in its mountains.

The state’s current rail plan lists 93 projects big and small, including a $44 million, 28-mile extension of the state-owned West Virginia Central Railroad to Bergoo, a tiny spot near the Elk River which fishing enthusiasts say is one of the best destinations in the state.

The entire loop would be 90 miles, some of which would repurpose existing out-of-service track.

It is one of the three West Virginian railroad plans estimated to cost over $10 million which the state is seeking aid for.

“I think it very well could have a major impact,” said Jimmy Wriston, deputy secretary of the West Virginia Department of Transportation, referring to federal funding. “Many people would like to see a little more extensive rail service in West Virginia.”

That includes a part of the $80 billion set aside in Biden’s proposal for upgrades for Amtrak, the national passenger railroad he has long famously used to travel from Delaware to Washington, D.C. Two long-distance Amtrak lines run through West Virginia, linking Washington D.C. to Chicago and New York City to Chicago.

Wriston said the separate commuter rail operated by Maryland Area Regional Commuter, which carries an average of 237 daily passengers from West Virginia’s eastern panhandle to D.C., and shares two stations with the Amtrak line, would also benefit from the plan.

Many of the other major projects in the state rail plan involve assessing the safety of intersections between railroad tracks and highways and making improvements to the most dangerous and traffic-heavy crossings — in some cases replacing grade crossings with bridges.

In Pennsylvania, there are no shortage of places waiting to see if their local bridge will get repaired — including the Market Street Bridge, the 89-year-old span across the Schuylkill in Philadelphia which carries four lanes of traffic but has seen no improvements since 2009.

Its official status as in “poor condition” is hardly unusual in the Keystone State: It has the second highest number of “poor” bridges in the nation, according to the state Department of Transport.

In Lycoming County, the state’s largest county by area, only 269 out of the area’s 617 bridges are deemed “good condition.” In Montour, the smallest county, just 88 bridges out of 159 make the “good condition” cut.

PennDOT has tallied $15 billion in highway and bridge needs. Yet the department’s highway and bridge budget is posted at $6.9 billion. Most recently, Pennsylvania received a C- infrastructure grade from the White House, in part because of its extensive road and bridge problems.

Biden’s American Jobs Plan promises to set aside over $600 billion to “transform our nations’ transportation infrastructure and make it more resilient” — with $115 billion specifically for road and bridge repairs.

Gov. Tom Wolf remains confident in the infrastructure plan, describing it as a “bold and comprehensive package.”

Ohio: Help, Our Viaduct Is Crumbling

In Ohio, the city of Cincinnati is also focused on bridges: specifically, the 89-year-old Western Hills Viaduct.

It connects the major corridors of Beekman Street and Harrison, Queen City, and Westwood avenues to Spring Grove Avenue, Central Parkway, McMillan Street, and Interstate-75 in downtown Cincinnati. Every day it carries more than 55,000 cars across CSX’s Queensgate, the busiest rail yard in the country.

Concrete from its top deck has fallen on to the lower deck; the viaduct scored just four out of nine on a federal scale for its condition and was declared “functionally obsolete” in 2007.

The City of Cincinnati and Hamilton County have secured $125 million of the $335 million required to build a single-deck bridge replacement — the easier option than rehabilitating the existing design thanks to the complexity of working above the rail tracks — carrying eight lanes of traffic and, unlike the existing crossing, protected lanes for pedestrians and bikes.

“The City and County will continue to aggressively pursue the additional funding needed to complete the new viaduct, including applying for upcoming federal and state grants,” City Manager Paula Boggs Muething wrote in a memo to the city council last year.

Federal funding would allow for replacement by 2028, followed by demolition of the existing bridge — a timescale similar to other large infrastructure projects being pushed for federal funding.

In Michigan, Lake St. Clair presents “the biggest wastewater [or] stormwater problem” in the entire state, according to Lance Binoniemi, the vice president of government affairs at the Michigan Infrastructure and Transporation Association.

About six miles outside of Detroit, the 430-square-mile body of water continues to be polluted with contaminated runoff and sewage from neighboring counties, despite being a source of drinking water for over 5 million people in Michigan and Canada. This sewage causes toxic algal blooms, and during rainy seasons, the lake often sees E. Coli outbreaks.

“Urban sprawl, sewer overflows and invasive species have severely affected the lake,” Binoniemi said. “Dangerous levels of bacterial contamination along the shores have resulted in beach closures and other public health concerns.”

Mike Gutow, an entrepreneur from Macomb County and founder of the Save Lake St. Clair nonprofit organization, has been fighting to raise awareness and lake project funding for a decade.

In 2011, Gutow challenged the Michigan Department of Environmental Quality, which claimed the lake’s toxic algae blooms stemmed from geese feces, and his hunch was proven right: the algae emerged from human sewage.

Gutow feels comfortable drinking tap water, showering, and going fishing, but refuses to eat what’s caught — local government has advised citizens not to eat the fish. Some of his neighbors only drink bottled water. Gutow won’t let his children swim on the shores. Parks and beaches are shut down during rainy seasons because of E. Coli bacteria, which stems from human and animal fecal matter.

In 2020, drinking water quality in St. Clair did not violate any standards from the Environmental Protection Agency, except once during a severe weather incident in January, which increased the water’s PH to a level that could cause metal corrosion.

While the lake’s water is processed and treated for safe consumption by the St. Clair Waste Water Treatment Plant, a wide variety of pollutants can still survive treatments, including insect repellent, drugs, and detergents, according to the Safe Drinking Water Foundation.

The lake also serves as a regional tourist spot for boating and swimming, yet only passes water quality tests 60 to 95 percent of the time for safe swimming, according to Swim Guide, a nonprofit water-tourism organization. These tests, which occur daily from April to September, screen for E. Coli.

When people think of infrastructure, they usually think of roads, Gutow said. This makes it harder on Save Lake St. Clair, because not everybody sees the area’s outdated pipes and murky water. Local politicians continue to decline Gutow’s requests for help.

Just this month, Gov. Gretchen Whitmer announced $500 million in grants from Michigan’s Clean Water Plan — $481,250 of which has been appropriated to St. Clair Shores and the surrounding area.

“We need over a billion dollars in our waterways, our sewers, and clean water in Michigan,” Binoniemi said. “We have not seen significant federal or state investment.”

Over the next 20 years, Michigan’s drinking water infrastructure will require $13 billion in additional funding, according to the White House. The state received a D+ on its official Infrastructure Report Card.

There are projects in all 50 states, with the furthest-flung from Washington, D.C., including a highway extension project in Hawaii which needs $72 million for completion.

Hawaii plans to extend Daniel K. Inouye Highway, also known as Saddle Road, on the Big Island by about 10.5 miles to connect the M&amacr;malahoa Highway to the Queen Ka’ahumanu Highway, linking the airports on the east and west coasts. It is expected to carry 19,400 cars and trucks a day by 2035.

At one point the state had hoped to fund it with bonds and a funding scheme based in part on a fee on car rentals, but the pandemic and the loss in tourism revenue thwarted that.

Like many infrastructure projects being touted for the cash, the Saddle Road extension is hardly a new project: since 1999, Saddle Road itself has been modernized with more than $300 million spent, some of it in federal funds, but the extension has never happened.

Now — like communities across the 50 states — the people of Big Island are waiting to see if they will see their infrastructure upgraded.

An earlier version of this article misspelled Andy Wrinkler’s name and Cincinnati.