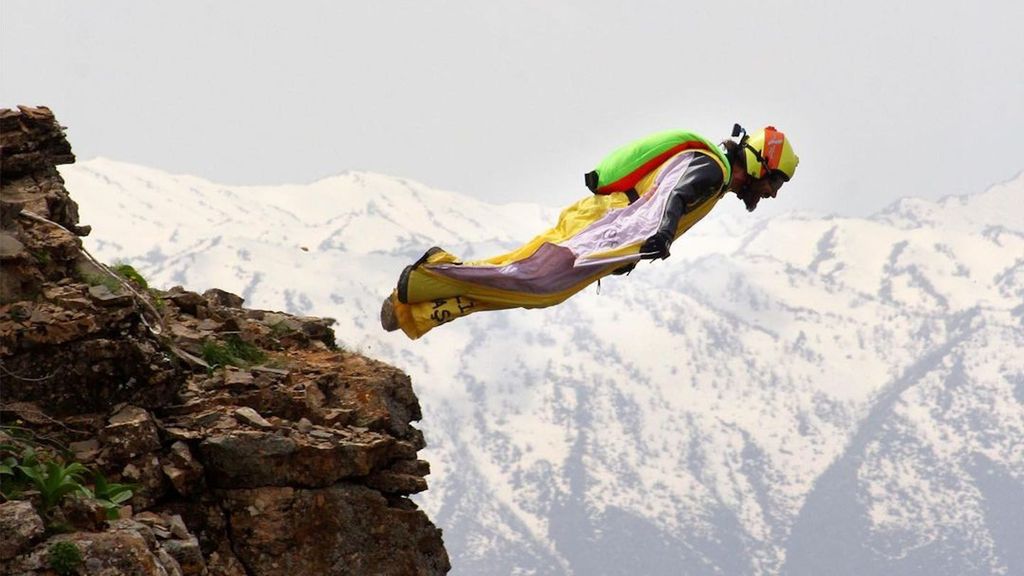 Cengiz Kocak, who flies with a wingsuit every day after work. (@cengiz.kocak/Zenger News)

A wingsuit jumper, known as the Turkish Batman, who learned his skills with the British Army, flies from work to home every day — from a height of nearly 6,500 feet.

Cengiz Kocak learned his flying skills by parachuting and doing other air sports during his 20-year military service.

After graduating from military school in 1992, he served in Turkey for a while and then went to the British Army Infantry Training Center in England in 2000. Two years prior, he broke a Turkish record by jumping from an altitude of 25,000 without an oxygen mask.

Cengiz started BASE jumping in 2011, and was invited to participate in the BASE Jump World Championship two years later, then again in 2015 where he took third place. BASE is an acronym that stands for all the launch surfaces (Buildings, Antennas, Spans, Earth). Athletes generally use a parachute to descend, though some experienced BASE jumpers like Cengiz transition to wingsuit descents.

When he retired from the NATO Rapid Deployable Corps in 2012, he made more than 5,000 jumps and received various medals by representing Turkey in national and international championships.

Cengiz, who is now general manager of a cable-car facility established on Babadag mountain at an altitude of 1,965 meters (6,446 feet) in Fethiye Turkey, goes to his home at the end of the working day by gliding in a wingsuit.

His vantage point offers a view of the famous Oludeniz Blue Lagoon.

“I do a wingsuit jump on the way home in the evening. After jumping from a height of about 2,000 meters (6,561 feet), I land in three-to-four minutes. If I want to go down this distance by car, it takes 40 minutes, and by cable car, it takes 25 minutes.”

Although Cengiz has worked as a parachute instructor, he advises against this method of commute for anyone else.

“BASE Jump is a sport that I do not recommend to anyone, on the contrary, I recommend not to do it,” he wrote on his website.

Indeed, the BASE Fatality List lists 404 people from all over the world of have died BASE jumping since 1981. Cengiz recommends that people interested train to skydive first, and to find a mentor and friend to learn BASE jumping.

“My job offers the opportunity to do sports, such as flying and jumping, which is my passion. When the work is done, I do base jumping with a wingsuit.

“Doing this every day adds a lot to me and my sport. That was my dream for 30 years. There is probably no second person in the world doing this. That’s why I feel lucky.”

Cengiz said people from all over the world have watched his videos on his social media account, which has about 20,000 followers.

“I want the number of people interested in air sports to increase, and I support the people who come to this region.”