VIDEO: Where Eagles Scare: The Microlight Pilot Who Saves Endangered Ibises From Birds Of Prey 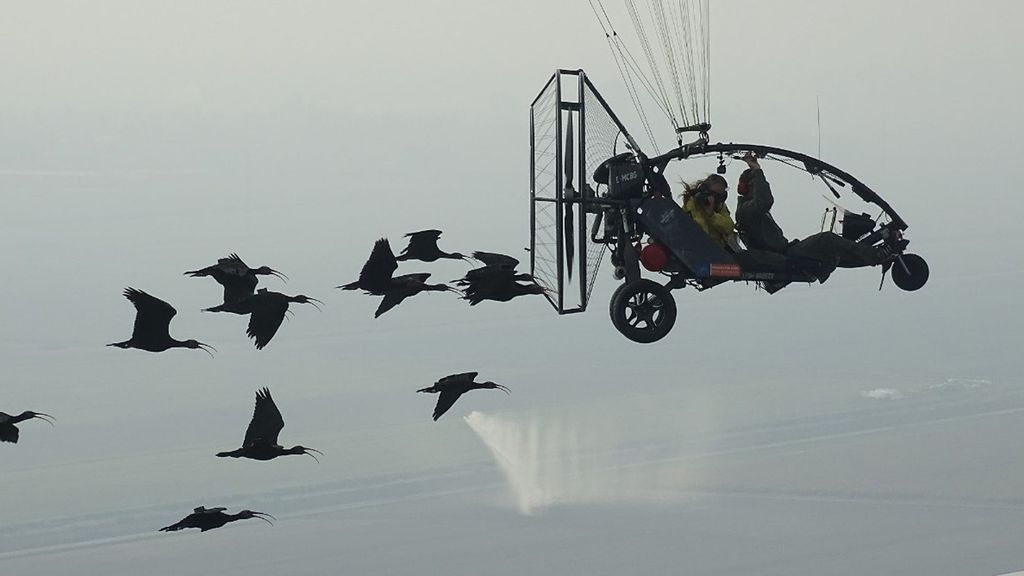 A real-life “Fly Away Home”-like professor who soars through the skies in a microlight plane helps endangered ibises migrate while protecting them from golden eagles.

“In Europe, the species became extinct about 400 years ago, mainly due to human persecution, possibly worsened by climate change (Little Ice Age) and the Thirty Years’ War,” the project states.

Much like Jeff Daniels’ character in the 1996 movie “Fly Away Home,” based on Bill Lishman’s actual experiences, Fritz flies a microlight aircraft every year from Austria to Tuscany in Italy to help the birds migrate as the seasons change, in a bid to reintroduce them to Europe.

He said that last year the trip was canceled due to the coronavirus pandemic. This year, however, he is optimistic that the situation will allow resumption of the annual,621-mile trip.

Fritz, who has spent years studying the endangered northern bald ibis, revealed some of the biggest challenges he faces as he flies up to 9,514 feet across the Alps.

The birds, which have been trained to follow a foster parent bird that sits in the microlight aircraft, are often attacked by golden eagles.

Fritz said the eagles’ only chance of successfully catching their prey is to dive-bomb them in a split-second attack, which results in the ibis scattering in every direction.

Another significant threat is the wind, which at high altitude can propel the microlight at speeds of 62 mph. Fritz said the microlight usually travels about 28 mph, the same speed as the birds, but if they get caught in an especially strong wind current, the microlight can go considerably faster.

If the wind is coming head-on, that could make the microlight fly backwards, a daunting experience.

A few years ago, Fritz attached a large parachute to slow down the craft. The only problem is, when he wants to land in strong winds, he might miss the landing site and crash in a field. So far, there has been no serious accident or injuries, he said.

This year, he plans to take off in August from near Salzburg, Austria.

After using an imprinting technique to make the birds follow the microlight plane with the foster parent inside, the latest recruits, which are selected from subpopulations found in Morocco and raised at the Schoenbrunn Zoo in Vienna, they are taken to their migration site in Tuscany as part of the project to reintroduce them to Europe.

The population is now more than 150 birds, divided into four breeding colonies north and south of the Alps.

The reintroduction project first became known because of its unusual method. Northern bald ibises in the wild learn the migratory route from their parents by following them as the seasons change.

Before the young birds from the species protection project can be released into the wild, they must learn the migration route.

Anyone interested in sponsoring the project can adopt one of the endangered ibises on the self-funded website.

“The beginning of hand-rearing is a reason for hope for us and our partners,” Fritz said. “The project continues despite all the obstacles.”