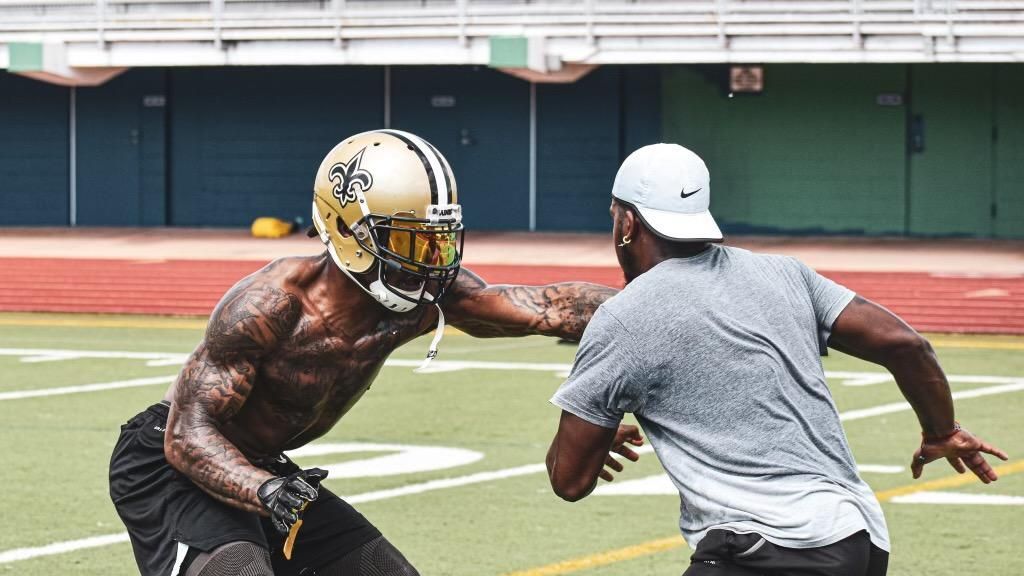 In the bigger/stronger/faster era in professional sports, selecting the right trainer is a must. That’s where James Banks earns his keep. An elite performance coach who specializes in position-specific training with a focus on speed and agility, Banks works with one of the top young safeties in the NFL: the New Orleans Saints’ Ceedy Duce.

Banks’ Forward Performance Athletes works with a lot of the top-tier talent coming out of Louisiana, and the results speak for themselves.

Zenger News recently spoke with Banks about his relationship with Duce, how he started Forward Performance Athletes, how he preps players for today’s offensive-oriented NFL and more.

Zenger: How did you get Forward Performance Athletes started?

Banks: I had a mentor back in Dallas, kinesiologist Ambrose Coleman. I was interning under him when I got out of college. Being around athletes and being an athlete myself, it was something I had an aptitude for.

I was in the 2016 NFL draft but ended up not getting a call. So, went and played in the Rivals Professional Football League in Miami, Florida, with the Florida Red Wolves for a year. Next I got picked up by an Arena [Football League] team in North Carolina, the Triangle Torch. I had a short stint there, and then I came back home to New Orleans. That’s where I decided to fully go into coaching in my city of Chalmette, where I went to high school. Since then, it’s been about growing the business.

Zenger: How long have you been in business?

Banks: Five years of developing athletes in all sports. I handle the speed and agility aspect of it, and position- specific training for football players. It’s been a blessing to work with so many athletes.

Zenger: What level does your program start at?

Banks: I work with 5- and 6-year-old athletes. I have helped and watched them develop to middle school and high school now. It’s been great to see the long-term development of these athletes reaching their full potential. It makes you speechless to see how many athletes you can have an impact on.

Zenger: There’s so much talent coming out of Louisiana, and guys like you are helping to develop and get eyes on those athletes. What specific ways do you do that?

Banks: New Orleans has always been a hotbed for athletes, and you see that in these camps. With COVID, they had to figure out another alternative of being seen in these camps. The sports performance field has made a turn as well, because now we’re seeing more athletes at once coming in wanting extra training.

Sports performance coaches are the ones improvising and figuring out ways to get these kids looked at and getting them into camps. It’s a lot of work on our end doing the research and making sure kids have the same opportunities as the guys from the other states. We’re putting them out there now with social media. TikTok has been an amazing platform to get their work out there.

Coaches are following these platforms and keeping up with these kids and inviting them to camp or in some cases wanting to see them in person. There is talent everywhere, but we want to make sure we are promoting our athletes the best that we can and giving them a platform to shine on.

Zenger: Do you prefer 7-on-7 drills, or would you rather that be one-on-one time?

Banks: I work more in a one-on-one setting. I feel like that’s where you’re going to get the most out of your athlete. When you get in those big group settings, the attention is more on tempo and not developing a skill. I’m big on developing a skill set that will translate to whatever field you’re on.

We want to make sure we can create the foundation and build on a skill base that will help you reach your full potential within your sport. During one-on-one time, I get to build that relationship with the athlete and get an understanding of what they are lacking and how I can create a program based off their needs.

Zenger: You use boxing mitts while working with receivers and secondary guys. What’s the connection between boxing and football?

Banks: One of the main guys that I work with is CJ Gardner-Johnson, now known as Ceedy Duce. He is a defensive back for the New Orleans Saints. Primarily, I work with the mitts because football is a physical sport, and it involves a lot of hand combat. Often guys are put in bad positions because of bad hand placement. If you have bad hand placement, that throws everything else off with your footwork.

I use the mitts as a hand and eye coordination tool. Basically, where to place your hands at. As far defensive backs, you see a lot of guys who are lunging, their hand placement is off, and it’s causing them to get beat right off the line of scrimmage. It’s all about positioning your hands and your body to win your battles.

Zenger: The defensive side of the ball has been handicapped in the NFL because the rules are designed for offenses to flourish. Now that they can’t be as physical, how important is technique and fundamentals?

Banks: It’s becoming a movement skill set. Now you have to position yourself … you can’t target, you can’t bump and run. The way football was played before is not the same as it is now. One of the reasons why I feel that way is because guys are, bigger, faster, stronger. But also, the game has changed. Teams don’t run the ball as much; it’s becoming a passing league.

As a result, a lot of guys have to learn how to move their feet in space and create better leverage for themselves to make a play. The sports performance coaches have figured out ways to now say, “OK, receivers are much faster, receivers have better timing of coming out of their breaks, so now I have to mirror that image. How can I teach my defensive back to move backwards and still be able to come out of that break in the least amount of time as possible?”

Training your body to be in certain positions it’s not used to being in, I think that’s the correlation of seeing some guys have more success than others on the football field. And that’s happening because they are taking their training to a whole other level. They’re not continuing to train the same way. Everybody is teaching a similar thing, but in a different way.

Zenger: How did you link up with Ceedy Duce?

Banks: He started a 7-on-7 team. I was training three athletes at the time who made the team. I had reached out to one of my guys and asked what time they practiced. I pulled up over there and was checking them out, and it was like an instant connection. CJ was giving me this look. It was something I felt. I needed to be present at that moment. After practice, I introduced myself to him. I let him know I had some athletes on his team and that I was a performance coach. Come to find out, he was looking for a trainer for the team. He had reached out to some people and had some let-downs. I told him to reach out if he needed anything.

He told me when they were practicing again and said that he wanted me there. I was there 30 minutes early, introduced myself to the guys and had them all warmed up before he got in the building. That sparked his day. He liked my professionalism and how I handled the situation. He was like, “I respect that.”

We traveled around different states with the 7-on-7 summer circuit, and we grew a bond and a brotherhood to where he was like, “I don’t see myself wanting to train with anyone else.” We connected and one day I reached out to him, “Hey man, let’s go get some work.” And from then on it just took off. He said, “I want it to be known, you’re my personal trainer.” We have been grinding since. He’s very professional, he handles his business and when he hits the field, he’s serious about his craft. Being in his space and helping him thrive in his skill set has been a blessing.

Zenger: I know you have a couple of college guys who will be entering the NFL draft soon, as well.

Banks: I have Jeremy Singleton, a receiver over at Houston. He will be coming out. Another receiver who is a freshman at Colorado, Keith Miller III. I have worked with a good group of guys. CD is different, very different.

Zenger: That said, Saints fans have been trying to figure out what makes Duce tick.

Banks: His work ethic. He has the drive to get better. When he’s on a football field, he’s the alpha male out there. That’s his mentality. He’s the dog. No matter who he lines up against, he just wants to be better. He’s always looking to compete. There’s times where we’re in a session and I’m seeing [something’s off], but I want to see if he realizes that. And he’ll be like, “Uh oh, we gotta redo that rep.” That’s the kind of guy I love to train. He holds himself accountable, and his tenacity for getting better is amazing. He wants to be the best, and he’s not going to stop until he accomplishes that.

An article came out that he was number 8 in the league for pass coverage DBs, and he was like, “That’s not good enough.” So, I asked him the goals we had for this year, and he was like, “I ain’t stopping till I’m number 1.” So, we look at his footage and I see things we can work on. We’re going to make him a better pass-coverage DB. Get better at that skill and everything else is going to fall into place.