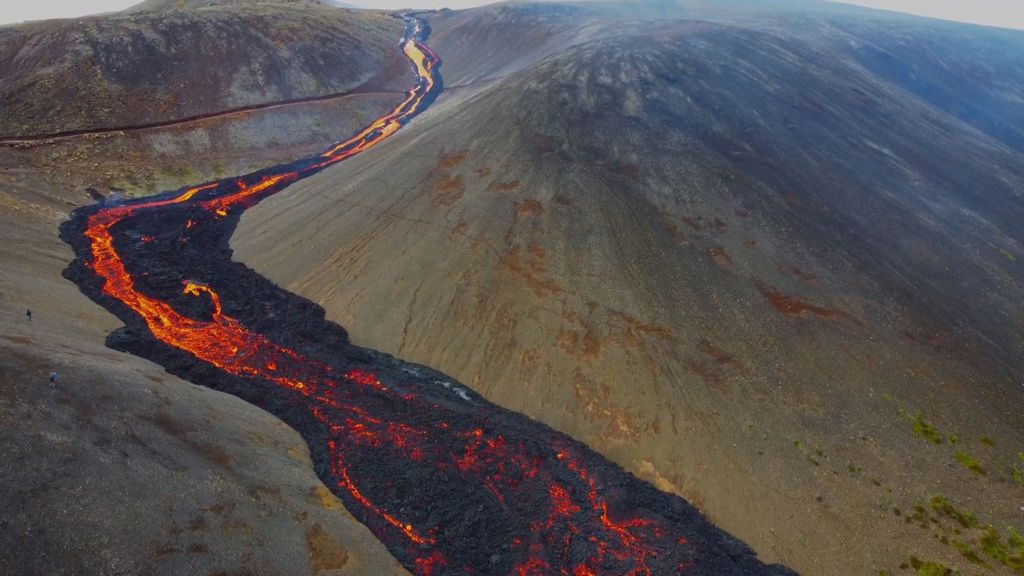 The lava river flowing at the Fagradalsfjall volcano on the Reykjanes Peninsula in Iceland on June 14, 2021. (Donatas Arlauskas/Zenger News)

Although walking on fresh lava fields is a dangerous activity that can turn deadly for sensation-seeking hikers, many exposed themselves to perilous situations.

Donatas Arlauskas, who lives locally, filmed a video in the Natthagi valley near Fagradalsfjall volcano on June 20, warning about the risks of falling through the thin crusts into red-hot lava cavities underneath.

He said the volcano had been releasing lava non-stop since March: “People need to see how dangerous it is to walk on solidified lava.”

His warning comes after an American tourist stood on the edge of the Fagradalsfjall volcano screaming with excitement as a huge flow of lava swept downhill toward him.

The American tourist, Van Reynolds, who lives in Denver, Colorado, had apparently been trying to get close to the crater but failed after it was completely surrounded by lava flows.

Arlauskas’ footage shows a small break in the crust as if a footprint has just been there, revealing the molten hot and bright red lava underneath.

The footage he recorded was from just one of the 130 volcanic mountains located in Iceland, which is spewing out lava burning at 2,192°F as it flows down the Icelandic valley.

Volcanologists and other experts believe the unprecedented recent seismic activity, amounting to an estimated 50,000 earthquakes in the last 15 months, could be the beginning of a turbulent period for the country.

Going against the government’s advice, hundreds of locals have been gathering, some can be seen in the footage, getting dangerously close to the rivers of lava.

In the past, Iceland’s volcanoes have wreaked havoc not only on the lives of the local population, but on the world.

When Eyjafjallajokull erupted in April 2010, flights were grounded all across Western Europe as plumes of ash carried by the jet stream filled the sky. Normalcy didn’t return until that October.

Even more severe was the eruption of Laki in 1783 and 1784, which according to historical accounts, darkened the skies of Europe for years. It also resulted in widespread famine across much of the continent.

Iceland is estimated to be home to between 150 and 200 volcanoes, but an eruption has not taken place on the country’s southwestern tip for more than 800 years.