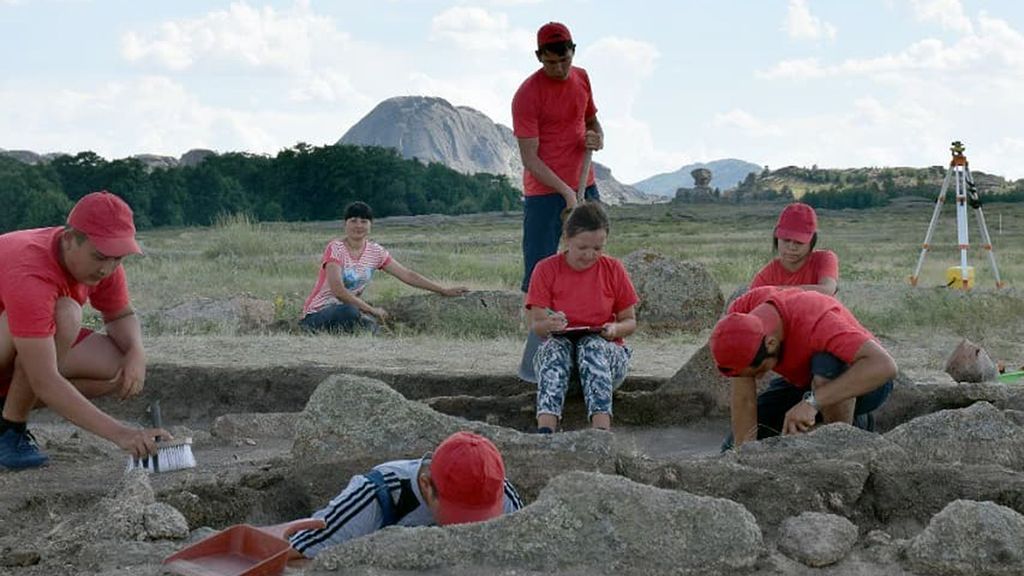 Workers at the burial ground in the Pavlodar region of Kazakhstan. (@salauat.iglikov/Zenger News)

A tour guide discovered that a 3,500-year-old burial ground near Pavlodar, Kazakhstan, had been destroyed, with ancient tombstones and countless artifacts damaged.

Marina Karimova arrived at the Valley of The Tombs on June 12 with a group of tourists only to find the site had been vandalized.

“We came on an excursion and noticed that the stones were scattered around, everything was torn apart, even though two weeks ago everything was in order,” she said.

The burial ground, which dates to the Bronze Age, is in an isolated area. It’s believed the vandals arrived in four-wheel drive vehicles, destroyed the site and then drove off.

A team of scientists and researchers plans to visit the spot to determine what repairs can be made.

Timur Smagulov, director of the Margulan Center at Pavlodar State Pedagogical University, said that simply fixing what has been broken is not enough, as this is likely to happen again.

The site is not protected by either a fence or security guards, a situation Smagulov says needs to change to help preserve it.

“We have to build a fence around the ancient burial ground, create viewing platforms and install information boards,” Smagulov said.

The first excavation of the ancient tombs was carried out in the 1980s, but it wasn’t until 2017 that local authorities granted it “’open museum” status.

“Ancient artifacts have been found here, including jewelry and ceramic vessels with geometric patterns characteristic of the Andronovo cultural and historical community,” said Elena Tusheva, a local archeologist who has been carrying out research at the site.

The burial site is known for the discovery in 2013 of an ancient warrior’s tomb. The findings included remains of a man believed to be a warrior of noble birth, the remains of a horse, fragments of a birch bark cooker, arrowheads, bronze buckles and wooden dishes.

“The warrior buried in the mound must have been from among the nobles of the Kimak community,” said Smagulov. “The high status of the warrior is certified by the remains of the gravestone made of sun-dried earth bricks. Similar structures were found at tombs of other famous nomads.”

«Previous Post
Armchair Travel Gets A Covid Revamp And Is Here To Stay»Next Post
El Of A Haul: Priceless Mayan Treasures Returned To Mexico By Collectors