Hitler-loving historian who named his son Adolf is forced to paint out the symbol of evil.
By William McGee June 22, 2021
Facebook
Twitter
Linkedin
Email 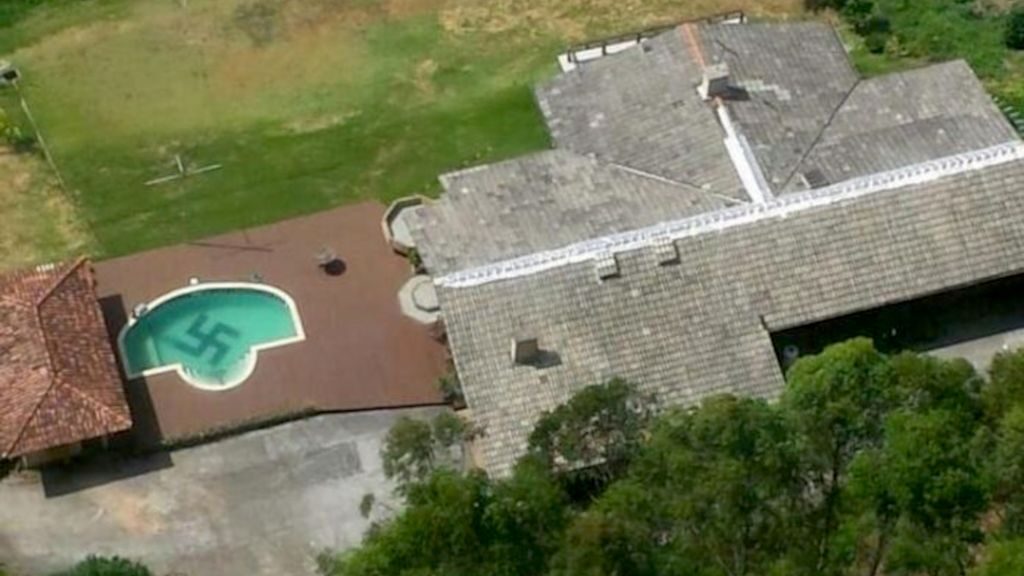 The pool of Wandercy Antonio Pugliesi, in Pomerode, in the Itajai Valley, after he changed the swastika symbol. (Ministerio Publico de Santa Catarina/Zenger News)

A Brazilian history teacher has been forced to cover up a large painted swastika on the bottom of his swimming pool, after prosecutors launched an investigation.

Wandercy Pugliesi’s admiration for the Nazis was first exposed back in 2014 when police carried out a search at his Pomerode, Brazil home as part of a kidnapping case.

During an aerial search with a helicopter, officers spotted the swastika at the bottom of Pugliesi’s outdoor swimming pool.

A photo from the case shows how the pool, together with its surroundings, resembles the flag of Adolph Hitler’s Third Reich, which was in use from 1935 to 1945. Hitler and the Nazis, along with collaborators, terrorized much of Europe during World War II, and were responsible for the deaths of more than 6 million Jewish men, women and children, according to the U.S. Holocaust Memorial Museum.

Pomerode, where the property is located, has been dubbed the “most German city in Brazil,” since the majority of its residents are of German descent. An estimated 90 percent are fluent in German or East Pomeranian, which is a Low German dialect.

At the time of the 2014 police search, police decided not to take any action against Pugliesi for his swimming pool swastika: It was on private property, and he could not be accused of personally promoting Nazism.

But the Brazilian Israelite Confederation complained about the lack of action and denounced Pugliesi, prompting the state’s public prosecutor to order him to either remove the swastika or alter it, or face legal action.

The public prosecution has since confirmed it has closed the case after Pugliesi provided evidence that he altered the design, painting the gaps between the swastika’s arms. It now resembles a square with a cross in the middle.

Photos still show tiles around the swimming area depicting a row of swastikas, which Pugliesi was not ordered to change, since they are joined together.

Pugliesi once put himself forward as a candidate for Pomerode’s council. However, the center-right Liberal Party, for which he was running, expelled him because of his Nazi swimming pool and his admiration for the Third Reich.

Authorities found decades ago that Pugliesi’s admiration went beyond the symbol in his swimming pool. He also owned Nazi-themed photographs, paintings, books and T-shirts that were confiscated from his home in the 1990s.

He fought a legal battle to get them back, claiming he was not a Nazi apologist — despite naming his son Adolf — and that they were merely for private academic study. The court dismissed that explanation and the items were never returned to him.