Some 1500 people have braved a cold morning for the nude winter solstice swim in Hobart as part of winter festival Dark Mofo.
By Ethan James June 22, 2021
Facebook
Twitter
Linkedin
Email 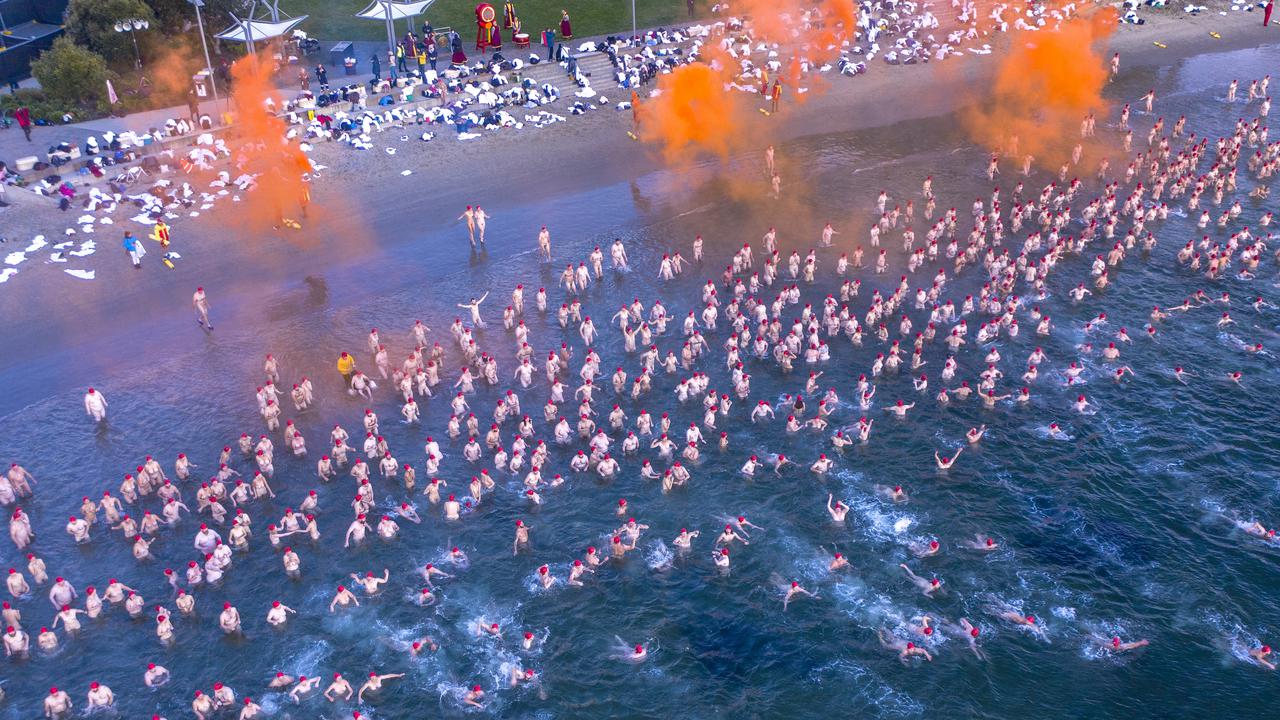 Some 1500 people braved a cold morning for the nude winter solstice swim as part of Dark Mofo. (AAP Image)

HOBART, Australia — After a year off because of coronavirus, Hobart’s Dark Mofo nude winter solstice swim has returned to a nippy River Derwent.

Some 1500 people braved the 3C air temperature to strip off at 7.42 am on June 22 and mark the shortest day of the year.

The water was a comparatively warm 12C.

“This is the first time we’ve done it,” Brady, 31, who hails from Brisbane, said.

“It was great to see how many people there were. When you get in, you just run screaming. You can’t really feel it until it’s too late.

“The skin starts to sting. (And) it does shrink.”

Tickets for the free swim, which signals the end of arts and food festival Dark Mofo and is considered an act of purification, were snapped up in a matter of minutes.

The dip began in 2013 with about 230 participants but has grown considerably in popularity since.

Red smoke and shrieks filled the air at dawn after tribal drums provided the countdown for towels to fall to the sand. A video on Dark Mofo’s official Twitter handle helps you witness the real picture of the event, where people can be heard screaming and enjoying the event. “7.42 am. 3° Celsius,” read the caption of the tweet, which currently has more than 960 views.

“We were here, and I thought it’s probably a thing we’d never do again. No regrets,” Sangitha, 28, said.

Dark Mofo was called off in 2020 due to the pandemic and has run over a shorter period this year. But this year, most festival events were free as a ‘gift to the audience.’

“You’ll find most free stuff in and around Dark Downtown: art, bars, and live performance in the heart of the city stretching over several city blocks. Be sure to check out X-Cathedra while you’re there,” said an official.

However, all the necessary precautions were taken during the event.

As per the event guidelines, as you get to a Dark Mofo event, you had to check in and register your details with the Tasmanian Government’s ‘Check-in tas’ app on your phone to assist with contact tracing. The event officials made sure that advice from state and federal health authorities was followed and took proper measures about how to reduce the risk of covid-19 transmission during the event.

The future of the event appears under a cloud, with creative director Leigh Carmichael signaling it may have run its course.