Israeli president pays tribute to woman and her husband who cared for so many children over the past 29 years.
By Abigail Klein Leichman June 22, 2021
Facebook
Twitter
Linkedin
Email 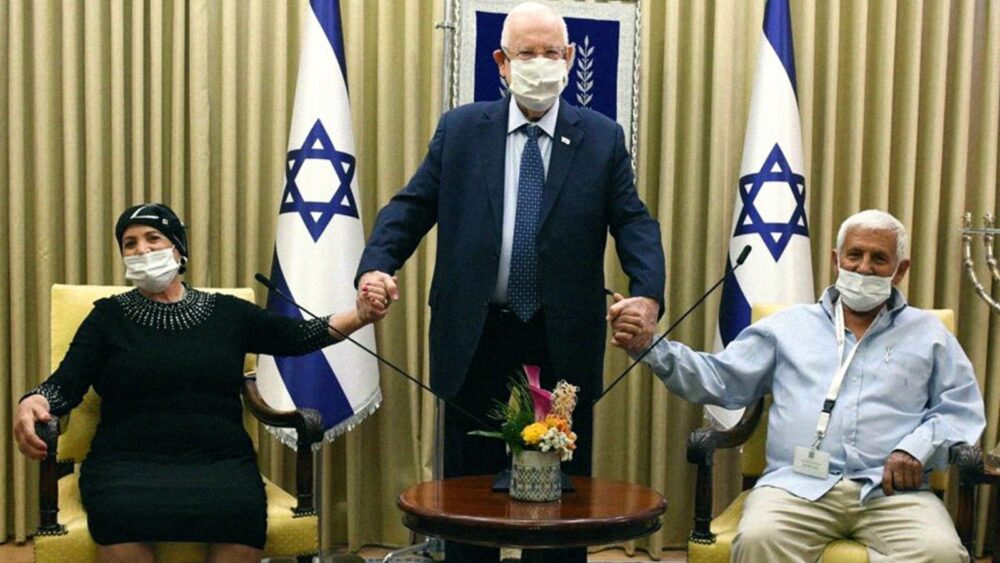 Angel Alon, 70, from the southern Israeli city of Netivot, has eight children, 24 grandchildren and three great-grandchildren.

But she and her husband, Shlomo, always had room in their hearts for more.

Over the past 29 years, they took in 217 babies as one of 13 emergency shelter foster families for Jerusalem-based Summit Institute.

To mark World Foster Day on May 31, President Reuven Rivlin invited the Alons to the President’s Residence. He thanked them for nurturing abandoned and abused children — mostly infants up to the age of three months — until appropriate long-term arrangements could be made for them.

There wasn’t a dry eye in the room as Angel Alon told her story.

“I started fostering in 1992. I started with one. The second came after two months, and then three siblings came together, so five in total,” she said.

“I got up for them at night — day-old babies, month-old babies. A social worker and welfare worker would tell me what the child had been through, and I would do what was necessary to take care of them. I looked after them all and my husband helped me a great deal.”

She told Rivlin that a local doctor voluntarily came at any hour to examine the tiny new arrivals.

“Every time I received a baby, I would call Dr. Morris and he would come and check the physical effects of the violence on their bodies,” she said.

“That was how it was until the children began to recover at the age of two or 18 months, and then they went to adoptive families, and I would get another five, another six. Each time anew.”

She made a photo album for each child to take along when they left her, documenting their earliest months.

“Angel, just like your name, you are a guardian angel,” Rivlin said.

“You have taken so many babies under your wing, and they have found sanctuary and warmth in your home. At their time of greatest fragility and vulnerability, you have taken into your home these tiny souls that need love and warmth more than anything else. You have saved lives, pure and simple. Bodies and souls,” he said, citing the Jewish saying that saving one life is like saving an entire world.

Alon was previously honored by Netivot in 2004 for her special work.

“I have no doubt that the love and warmth you gave your foster children is in their hearts,” the president told Alon, who immigrated from Morocco at age 11 and married when she was 18.

“Thank you for deepening our people’s values of giving and compassion. May you benefit from a fraction of the good and loving kindness you have given to others during your life, never expecting anything in return.”

After the event at the President’s House, the Summit Institute hosted a farewell and recognition ceremony for Angel and Shlomo Alon and their family, giving all the guests T-shirts printed with a picture of an angel.

«Previous Post
VIDEO: Volca-No! Terrifying Footage Of Lava Flow Released To Scare Off Crater Hunters »Next Post
Investment In Israeli Tech: $10.5B In First Half Of 2021