The fresh sanctions relate to the February 1 military coup and the repression of peaceful protesters. 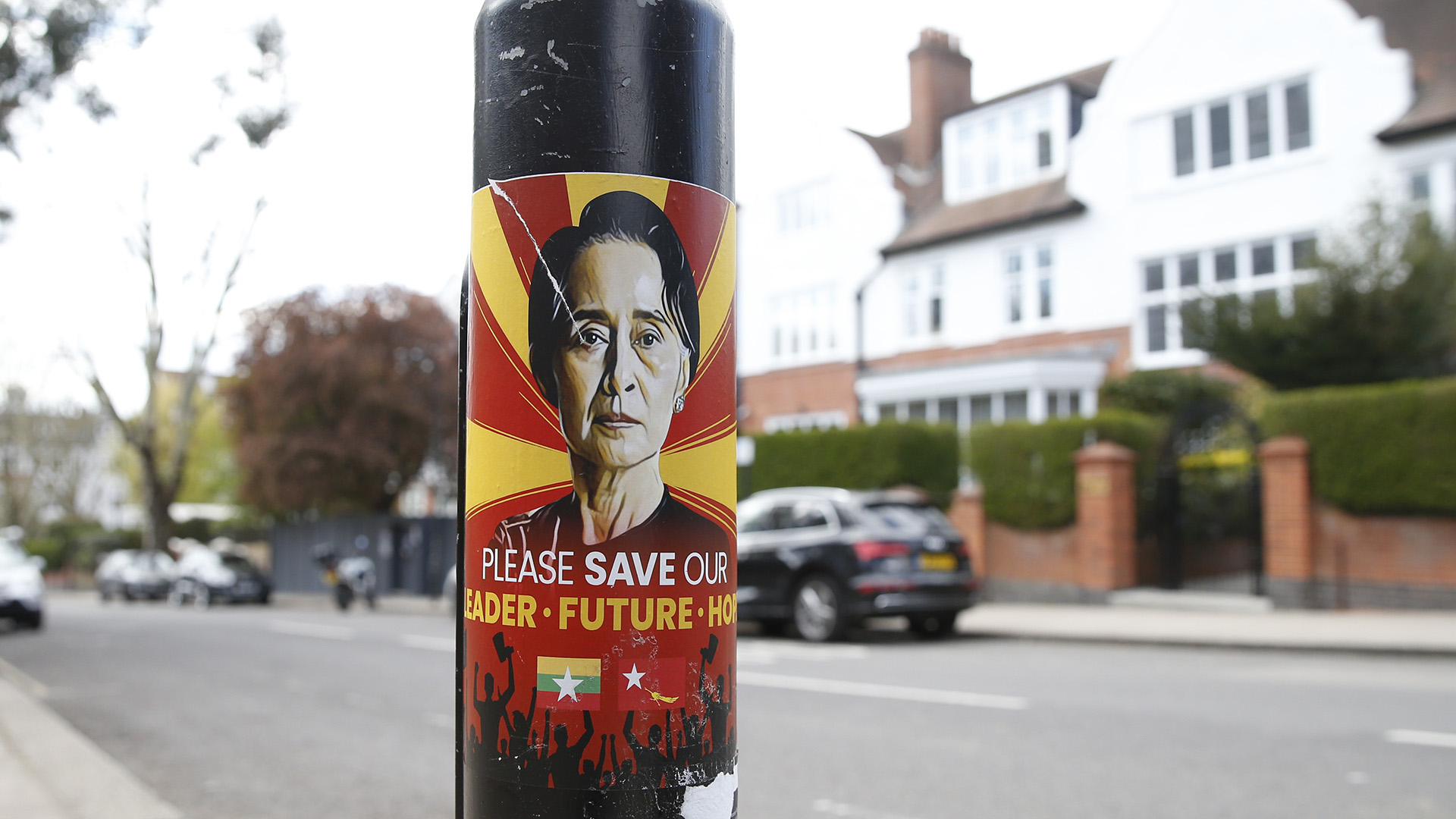 A sticker stuck to lamppost outside ousted Myanmar ambassador Kyaw Zwar Minn's residence in West Hampstead in London, England. He was removed from office and locked out of the Myanmar embassy in London after he publicly declared his support for Aung San Suu Kyi. (Hollie Adams/Getty Images)

BRUSSELS — The United Kingdom and the European Union on June 21 imposed fresh sanctions on Myanmar state-owned entities and individuals related to the February 1, 2021, military coup and the subsequent violent repression of peaceful protesters.

According to a European Union press release, the 27-member European bloc slapped sanctions on eight individuals, three economic entities, and the Myanmar War Veterans Organization about the military coup staged in Myanmar, Burma.

The individuals targeted by sanctions include ministers and deputy ministers, and the attorney general, who are responsible for undermining democracy and the rule of law and serious human rights violations.

The four entities are either state-owned or controlled by the Myanmar Armed Forces, contributing directly or indirectly to the military’s revenues or activities.

“By targeting the gems and timber sectors, these measures are aimed at restricting the junta’s ability to profit from Myanmar’s natural resources, while being crafted to avoid undue harm to the people of Myanmar,” said the European Union in the release.

The European Union’s restrictive measures, which now apply to 43 individuals and six entities in Myanmar, include an asset freeze and a prohibition from making funds available to the listed individuals and entities.

A travel ban is also in effect for listed persons that prevents them from entering or transiting through European Union territory.

On the other hand, the United Kingdom imposed additional measures on the Myanmar Timber Enterprise and Myanmar Pearl Enterprise, two state-owned entities in Myanmar’s extractive sector. These asset freezes will be enforced with immediate effect and target the Junta’s ability to profit from pearl and timber, two high-value natural commodities that generate millions in revenue for the military regime.

The measures taken will target the Myanmar regime’s economic interest with new designations against the State Administration Council, the Junta’s ruling body. They continue to undermine democracy and brutally suppress Myanmar’s civilians.

In a statement, British Foreign Secretary, Dominic Raab, said that the move sends a clear message to the Junta that the UK will not allow financial support that props up the military regime following the coup.

“Alongside our allies, we are placing sanctions on companies linked to Myanmar’s military junta, targeting the finances of this illegitimate regime,” Raab said.

“The military has continued its subversion of democracy and brutal killing of civilians. We will continue to hold the Junta to account and sanction those responsible until democracy is restored.”

He said that the United Kingdom would also strengthen their Overseas Business Risk guidance to reiterate the message that United Kingdom businesses must undertake enhanced supply chain due diligence and should not enter into trading relationships that benefit the Myanmar military.

This comes after the G7 leaders on June 20 strongly condemned the military coup in Myanmar and the subsequent violence committed by the security forces on civilians. The group called for the immediate release of those detained arbitrarily, including civilian leader Aung San Suu Kyi.

«Previous Post
It Is Dangerous To Be An Ahmadi In Pakistan, Says US Expert»Next Post
India Electric Vehicle Sales To Grow At 26% Over 2020-23: Fitch Solutions