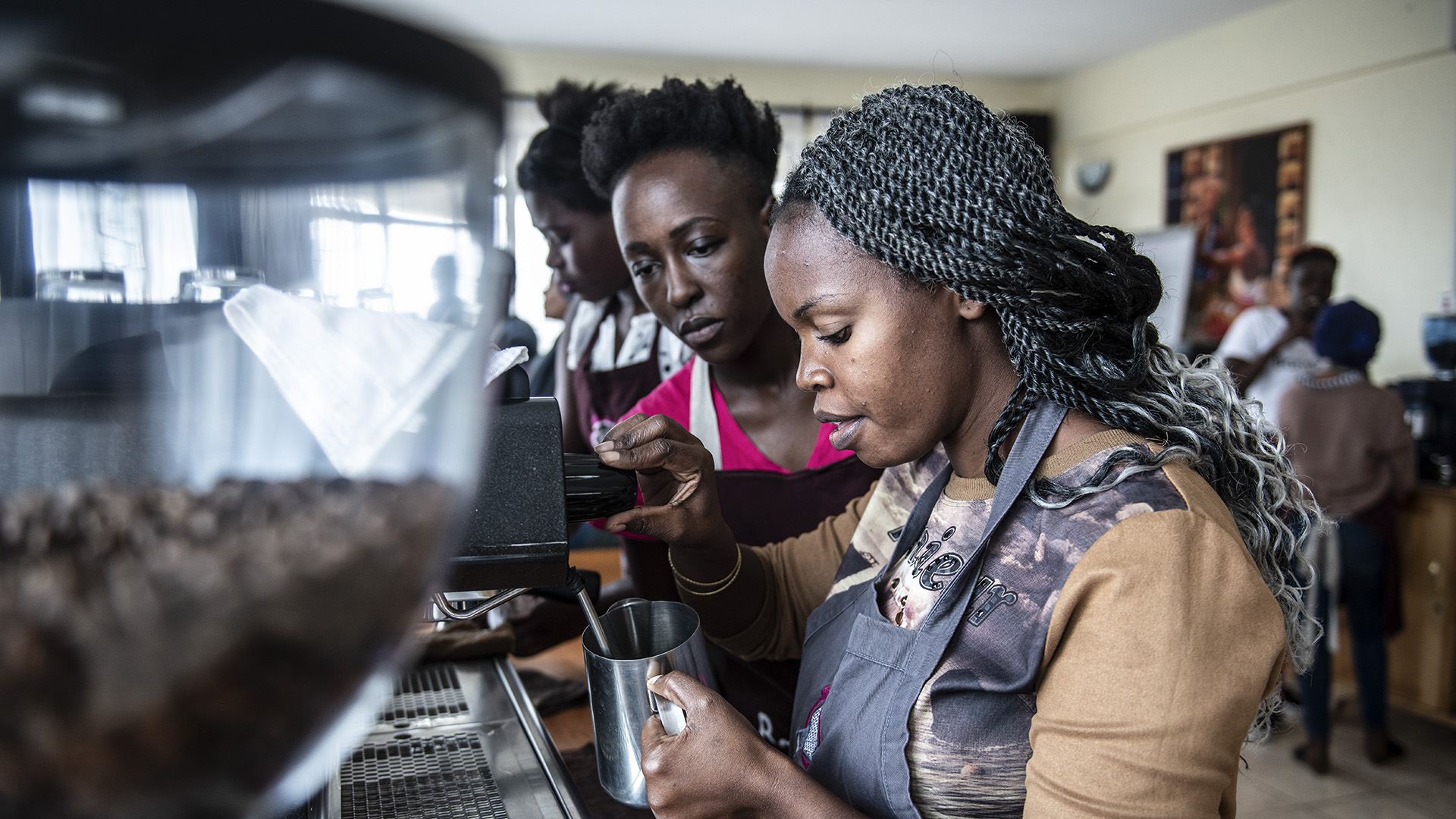 Students in a professional barista class practice creating specialized coffee drinks on at Baristapro in Nairobi, Kenya. The school specializes in barista skills, and has seen class sizes grow rapidly since opening in 2014. (Andrew Renneisen/Getty Images)

NAIROBI, Kenya — In the hit song “Lazizi” by Kenyan boy band Sauti Sol, they sing of a smitten young man wooing a beautiful girl, promising to take her out to Java for coffee and small talk.

The song immortalized Java House in Kenya’s urban dating scene and its role in nurturing a coffee-drinking culture in Kenya.

Kenya is the sixth biggest producer of coffee in Sub-Saharan Africa, but features in the “others” category in the list of top consumers as most Kenyans prefer tea.

However, there has been a noticeable shift in coffee consumption trends in major urban towns, especially in the capital Nairobi. It is common nowadays to hear friends and acquaintances saying, “let’s meet up for coffee soon”.

This shift started roughly a decade ago and has been picking pace since then. This is manifested in the mushrooming of coffee restaurants in Nairobi’s central business district.

It all started with the establishment of Java House, the American-owned chain of restaurants that set up shop in Nairobi in 1999 to cater to tourists and expatriates.

Overwhelmed by demand, it soon opened several restaurants in the city before skeptical investors got convinced of the viability of coffee restaurants and started their variants of coffee houses in every corner of the town.

Initially, Java House’s niche market was the top middle-income earners and the high-income earners who desired clean, quiet, and spacious restaurants for their business and lunch meetings.

But it also found a market that it had not anticipated. Java House was the place to go to for Nairobians wanting a different, romantic dating scene from bars and nightclubs.

“Java House not only served delectable meals—though a tad bit too expensive by Kenyan standards—but also lent an air of luxury, class, and sophistication to the whole occasion,” Alex Kirwa, 39, a civil engineer based in Nairobi, told Zenger News.

“Furthermore, it helped that their portions were large enough,” said the father of three, who used to patronize Java House with his wife while they were dating.

Kenya’s economy has been growing steadily over the years, and more and more of its young working population has more cash to spend on outings and dates. But not everyone wants to come to the center of Nairobi to have these moments.

“Nairobi’s youth today are tech-savvy individuals who have been all over the world. When they come back from abroad, they bring their experiences and trendy ideas, and restaurants and entertainment joints must match their high standards,” Kirwa told Zenger News.

In the evenings, masses of up-and-coming young couples in their business suits and ties flock to coffee shops such as Java House.

However, this new fad has not translated into vast consumption of the beverage in the country.

The only part of Kenya that had an established coffee drinking tradition is the coastal region, among the Swahili and Arab populations. This was the legacy of centuries of interaction between the locals and the Arab slave traders along the coast of East Africa.

Tea continues to be quaffed in great quantities across the country. The reason for this goes back to the colonial legacy and a crazy period of a three-year boom in coffee prices in the world markets in 1975.

Colonialists introduced coffee in Kenya in 1893 at a great price to the indigenous people. The white settler forcefully moved communities that occupied the most fertile parts of the country to create room for their coffee and tea plantations.

They called these areas the White Highlands, stretching for millions of acres, starting from Central Province, the outskirts of Nairobi to Kitale in Rift Valley Province, some 450 kilometers (280 miles) west of the capital.

His grandfather was a victim of the forceful translocation by the colonialists in the 1930s, with his family permanently losing about 30 acres.

“There was a lot of bitterness by our people towards the crop. My grandfather occasionally used to sing a song they composed about the coffee tree while in detention. The song was about how bitter and evil it is,” he said.

This bitterness is compounded by the strict laws established by the colonial farmers to govern the production of coffee and tea in the country.

The rules forbid African farmers from growing cash crops. They could not uproot or cut down a coffee or tea bush without the written permission of colonial authorities.

At independence in 1963, the new government did away with some of these laws, such as forbidding Africans to grow tea and coffee but kept the one requiring a permit to cut them down.

Instead of distributing the fertile White Highlands, the new Kenyan leaders appropriated them, and the farming of tea and coffee continued uninterrupted.

However, how coffee came to be associated with the rich dates back to the coffee boom of the mid-1970s.

In July 1975, temperatures in Brazil, the world’s largest producer of coffee, fell to below freezing point, destroying more than 70 percent of the South American nation’s crop.

The upshot was an acute shortage in the global markets for years as prices hit the roof.

In October 1978, President Jimmy Carter imposed a trade embargo on Uganda’s coffee trade with the United States—the source of more than 90 percent of Uganda’s foreign income. It meant Uganda’s coffee farmers could only beat the embargo by selling through Kenya.

“It was during this time that coffee became known as Kenya’s black gold,” Rwandet Choge, a literature graduate and media practitioner in Nairobi, told Zenger News.

“And poor people do not handle gold.”

As the price of coffee became prohibitively high, most Kenyans opted for tea.

However, as with many successful enterprises, corruption and years of mismanagement led to a marked decrease in coffee production in the country. In defiance of the law, poor farmers uprooted their bushes in favor of tea or other crops.

The elite who owned coffee plantations converted them into posh residential estates. That marked the downfall of the cash crop in the Kenyan economy and the beverage in most Kenyan homes.

Coffee contributes 0.22 percent to Kenya’s Gross Domestic Product, earning the country an average of $233 million annually in foreign exchange. It is the country’s fourth most important export after horticulture, tourism, and tea.

The government is carrying out extensive reforms in the sector to stimulate coffee production, which might bear fruit.

However, Ngugi hopes that the renewed interest in the drink among the urban youth will breathe new life to coffee farming in Kenya.

“The problem, though, is taking it to the masses again.”