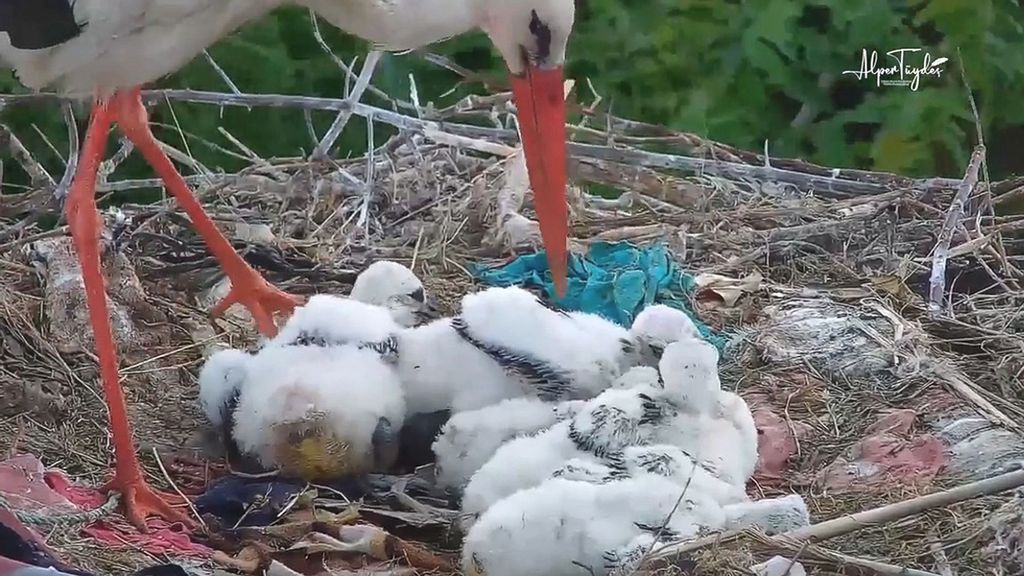 Yaren protects her chicks by snuggling up during a hailstorm in Bursa, Turkey. (Alper Tuydes/Zenger News)

A stork known for her 10-year friendship with a local fisherman uses her body to protect her chicks during a hailstorm in video filmed near the small village of Eskikaraağaç, Turkey.

Seconds before the storm starts, Yaren, the star of an award-winning documentary named after her, ensures the chicks are in position. Then she covers them with her wings to shield them from the rain, which soon turns to hail.

“Yaren realized the intensity of the sudden downpour just in time,” said photographer Alper Tuydes, who shared the video. “This is just one of the many challenges they deal with in nature, and you see how hard animals are struggling.”

The stork shares an unlikely friendship with Adem Yilma, a Turkish fisherman she has been visiting for 10 years. Yaren migrates from Africa every spring and spends six months on the lake visiting Yilma on his boat every day.

A day after the stork visited the fisherman in March, he said: “I was wondering if Yaren would come this year because she was three days late this year. I am delighted now. I see Yaren as one of my children. I will fish and feed Yaren during the six months she stays in the village.”

During spring, tens of thousands of storks migrate from Africa to European countries via Turkey. Eskikaraağaç is the only Turkish village to be a member of the European Stork Village Union.

For 15 years, the village has hosted an annual summer Stork Festival.

A lake in Eskikaraağaç is the location of “Yaren,” which charts the unusual friendship between the two.

The documentary made Yaren a household name in Turkey, with many people following her annual migrations and how the unlikely pair reunite every year.

The friendship was first brought to public attention when it was photographed by Tuydes, whose images garnered international acclaim, according to Turkish newspaper Bursada Bugun. Their story won best documentary at the 2020 Prague Film Awards.

«Previous Post
VIDEO: Cheet-ahhhhhs: Adorable Newborn Cubs On Their First Time Out Of The Den »Next Post
3 Israeli Designers Do A Stunning Spin On Sustainability